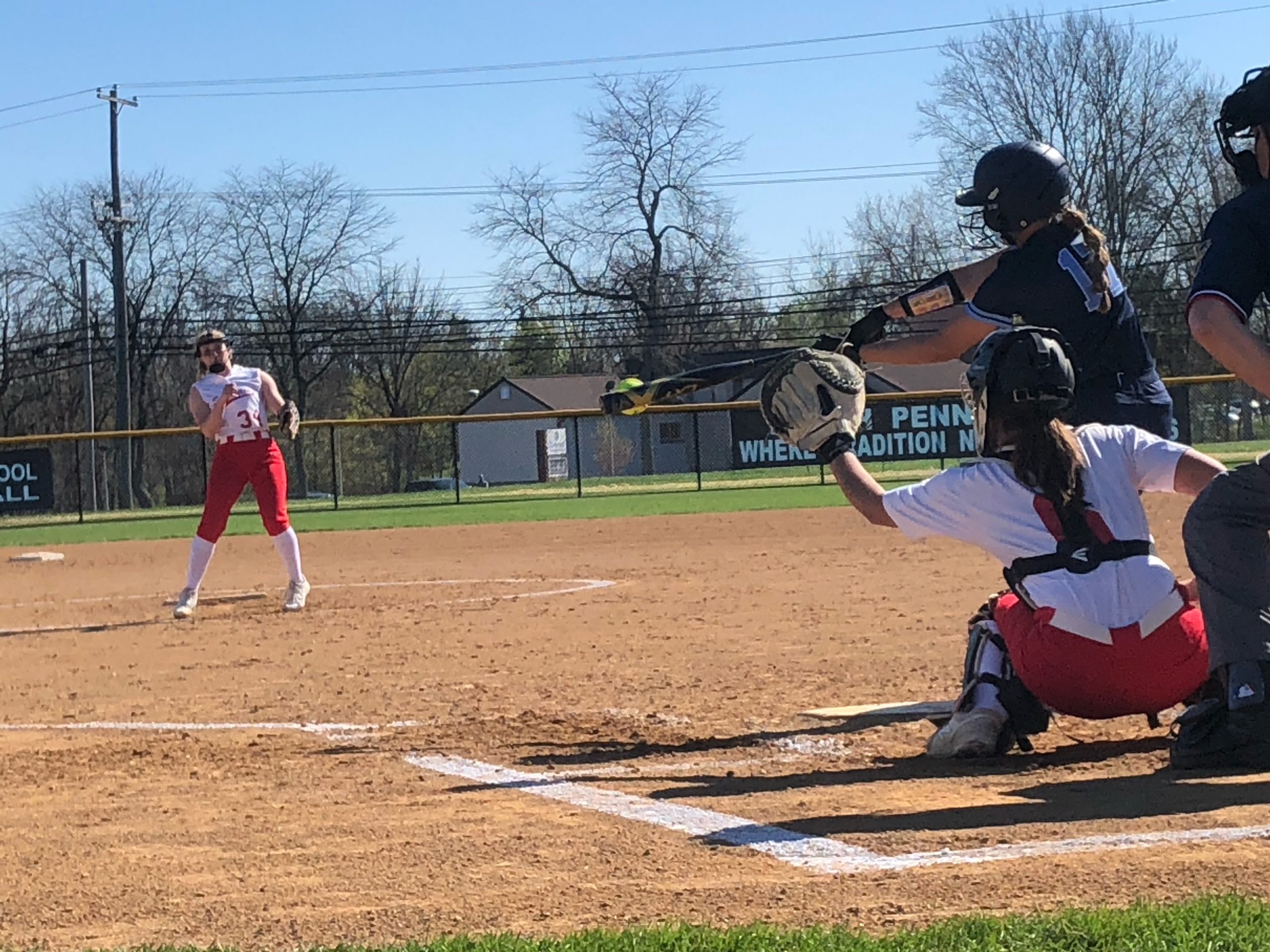 North Penn's Julia Shearer gets the ball on the ball for an RBI single against Souderton on Tuesday, April 13, 2021. (Andrew Robinson/MediaNews Group)

TOWAMENCIN >> An opponent finally got Julia Shearer out, but even that was still productive for her team.

The North Penn sophomore started her varsity career on an unbelievable tear and carried it over to Tuesday’s game with Souderton. It was much the same for the rest of the team, which continued to rack up hits and in the pitcher’s case, strikeouts.

“People have been saying it to me all week, that I just can’t get out or whatever, but no one is perfect,” Shearer said. “I was just confident in myself and stayed within myself. I wasn’t trying to do too much, just put the bat on the ball and it seemed to be working for me.”

That might have been a bit of an understatement. Shearer, who bats leadoff for North Penn (4-0, 3-0 SOL Colonial), began her varsity career with a 4-for-4 day at the plate and scored the winning run on a Volpe double against Quakertown.

From there, nobody could get her out until the fifth inning on Tuesday when Souderton (4-2, 1-2 SOL Colonial) freshman McKenna Schroding got Shearer to ground out to second. While somebody finally prevented the fleet-footed outfielder from reaching base safely, her groundout still drove in the final run of the afternoon.

Shearer, who starts in center field, played an inning at first base then finished the game in the pitching circle where the lefty allowed a hit then mowed down the next three batters on strikeouts to end the game.

“What a start for a kid,” Knights coach Rick Torresani said. “She just works so hard. I wasn’t going to take Mady out, but when I asked (Volpe), she said ‘put Julia in.’ I wanted to give her a shot, just in case we need her down the line.”

Souderton, which came in off a loss to Central Bucks East but is otherwise off to a solid start this season, couldn’t seem to slow down Shearer’s bat or get its own offense going against Volpe. The Knights’ senior right-handed starting pitcher allowed just one hit in her six innings while striking out 15 batters, four times striking out the side in order.

“She pitched another great game for us,” Torresani said. “Like I keep telling people, it’s just Mady being Mady.”

Shearer went 3-for-4  with four RBIs at the plate on Tuesday, starting with a leadoff double in the bottom of the first that got the Knights going. She would score on a two-out RBI double from Volpe and Bri Wilmont followed with an RBI single to put North Penn up 2-0.

An inning later, Shearer came up again and delivered an RBI single that plated Gianna Cimino, who had herself driven in a run when her single scored Sophia Collins. The big hit for Shearer would come in the fourth inning when she fired a 1-1 offering over the fence in right-center for a two-run home run.

The outfielder, who has two triples and three doubles this season, said it’s a matter of keeping a consistent swing.

“I kind of just swing the bat and it goes and I stretch out the extra base hits with my wheels,” Shearer said. “I keep the same swing no matter where the ball is pitched and that works for me. I try to stay within myself and adjust, it can be hard to adjust with all the different pitchers but I stay confident I can get the hang of it.”

Wilmont, also a sophomore, had a nice day at the plate. The Knights’ first baseman went 3-for-3 with three singles, two of them driving in runs. Torresani said Wilmont has plenty of power but liked her swing on Tuesday and taking what was there to put the ball in play.

North Penn wanted to swing early and aggressively against Souderton junior Abby Burns, but the Souderton righty did work out of some tough spots. Burns, who played for Torresani in the 2019 Carpenter Cup, stranded two runners in a scoreless third and struck out three.

Souderton freshman McKenna Schroding pitched a scoreless sixth in her one inning of relief. Catcher Brooke Scotti’s flare single with one out in the third was the only hit Volpe allowed while Kayley York led off the seventh with a single up the middle off Shearer.

Shearer, who plays travel for Newtown Gold, said she prefers center field over first base when fielding even if her opportunities are limited playing behind a strikeout pitcher like Volpe.

“It always surprises me when something gets hit to me but I always try to stay ready and back her up,” Shearer said. “She deserves that, she deserves to have the plays made behind her. I do like playing center mostly because nothing ever gets hit to me, he throws me out at first and I haven’t played it much recently, so it scares me sometimes and when I’m pitching, I just try to live up to Mady.” Torresani said Shearer’s velocity is right around what Volpe throws but the left-handed sophomore doesn’t have the experience the Coastal Carolina-bound senior righty does. That didn’t stop Shearer from striking out the next three batters she saw after York’s leadoff single.

For her part, Shearer said she’s not trying to be a replica of Volpe in the circle, instead she wants to be herself.

“We missed out on a lot last year so I just wanted to leave it all out on the field and try to prove myself,” Shearer said. “I would have been one of the youngest people on the team last year, so I’m just trying to show I was good enough and that I can play well enough to put myself on the field.”

Shearer is going to make more outs this season and most of them aren’t going to still generate runs but the sophomore said she’s going to keep doing what she can to help her team. The Knights have a big game coming on Friday with CB East and they’re hoping to continue getting contributions from the entire team.

Torresani said he jokingly told Shearer he was benching her after grounding out in the sixth inning and the sophomore heard it from a couple teammates too.

“A couple people were making fun of me, jokingly but I tried not to listen to them because I knew they were rubbing it in,” Shearer said.