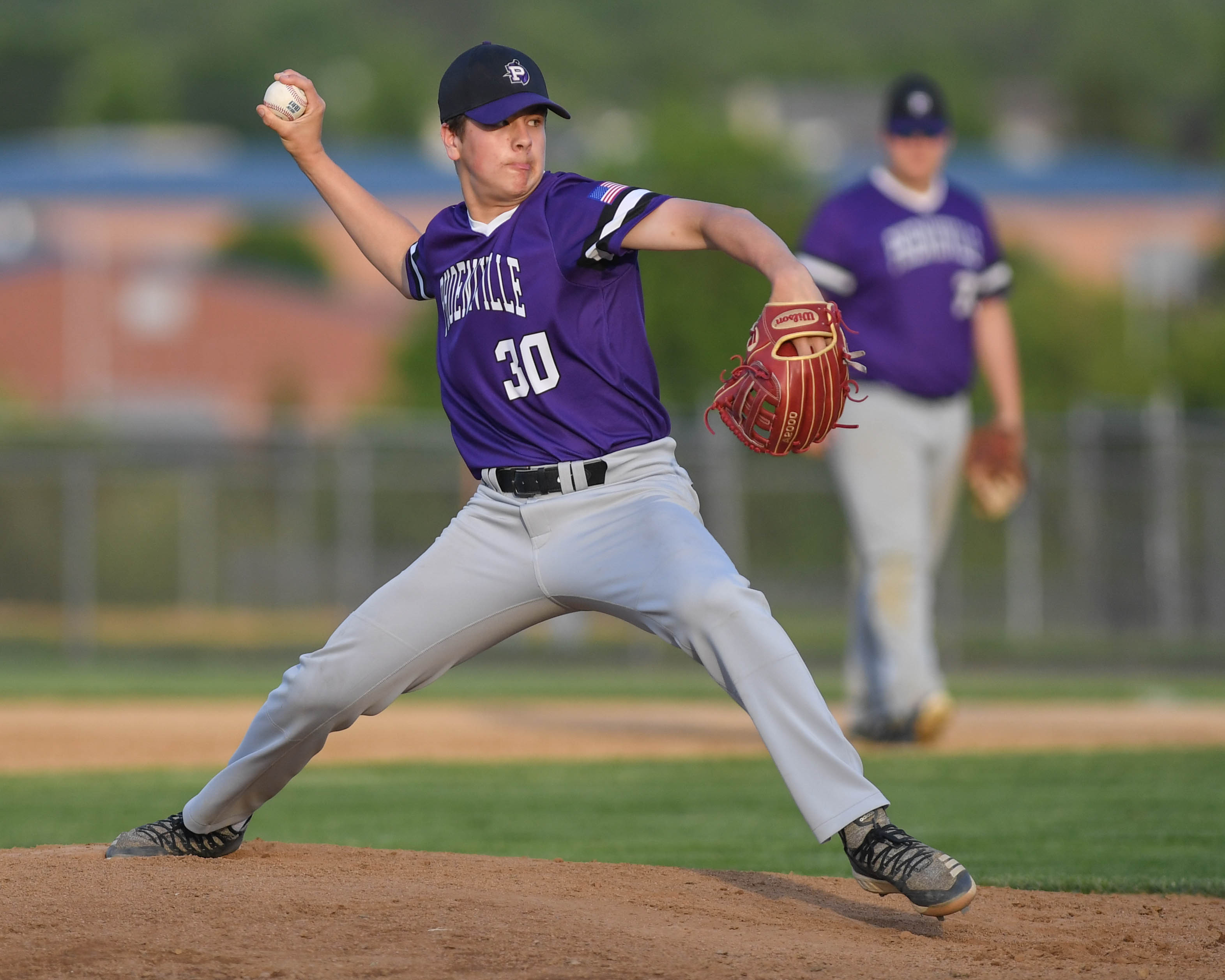 Outlook: Boyertown has five players with varsity experience from two years ago, including senior pitcher Trey Yesavage (East Carolina), a second team All-Area pitcher in 2019 when he tossed a no-hitter as a sophomore. Senior Cole Hertzler (Liberty) gives Boyertown another Division I arm in its rotation and a big bat in the lineup. The Bears last won a PAC title in 2018 and haven’t gone three-or-more years without a league championship since 2009-11.

Outlook: The Blazers have experience on the corners with seniors Mikey Gregos and Colton Yenser both seeing time on the squad’s league and district playoff team in 2019. Daniel Boone should have a run-producing offense once again, scoring 14 runs in their opener, and will need to develop some strike throwers to compete in a tough Berks I division. “The team believes that if we can simply execute the basics, make the routine plays, attack the strike zone, and put the ball in play, then we should be able to continue to compete in the postseason,” McCord said. “We realize we will need to mature quickly and stay focused in a tough division.”

Outlook: The Blues have two experienced and talented arms in righthanders Gilbert Saunders (Minnesota commit) and Brandon Bastian. They also have some experience at the plate as outfielder Tyler Chenevert and infielder Kenny Palmieri both saw action as freshmen in 2019 with Chenevert earning All-Area honorable mention honors. “We’re a young team looking to establish an identity, get better every game, and compete for a league title,” coach EdTurner said.

“Our pitchers need to throw strikes, our hitters need to put the ball in play hard, and our fielders need to avoid giving opponents more than three outs per inning.”

Outlook: Senior Kevin Trafford and junior Nolan McCloskey were part of the Warriors’ lineup in 2019 when they won their first Liberty Division championship and advanced to the District 1 quarterfinals. McCloskey is one of just five 2019 All-PAC players returning to the league. “Given the number of starters that graduated from the last two seasons, especially on the mound, we have great opportunities for players to be competing with each other for starting positions all over the field,” coach Paul Spiewak said. “Our seniors have been doing a great job of leading this group towards doing the right things towards success, and we have a tremendous group of underclassman that are working hard every day. The 2021 team is very much looking forward to the challenge of proving to ourselves and to our opponents that we can compete at a high level in one of the toughest baseball conferences in the state of Pennsylvania. ”

Outlook: The Eagles only have three projected starters back from 2020 and have a large number of freshmen and sophmores on the roster this season. Senior shortstop and captain Jimmy Keyes will be leaned on both on and off the field. “So far this preseason the team has looked very good defensively,” coach Luke Stem said. “We have players all around the field that are very talented and have shown an ability to make all the plays. I expect us to have a solid defense this year and really help out our pitchers. Our guys know that they will need to be sound defensively and do their jobs offensively. At the plate, we are seeing a lot of consistent contact. Our players are focused on being smart with their approaches and getting their timing down for our first game of the season.”

Outlook: The Wildcats broke a three-year District 1 playoff drought in 2019. Senior Sam Morris was one of the PAC’s top arms and top bats two seasons ago. He is the lone 2019 first team All-Area returner still around. “The league is looking to be competitive again this year with some teams having some top notch pitching returning,” coach Greg Gilbert said. “Without having a season last year, varsity experience will be scarce and the teams that can mature to compete at the varsity level quickly will benefit.”

“While we have many unknowns due to missing the season last year, we seem to have a high number of arms this season. If we can become consistent in the strike zone and throw multiple pitches for strikes we hope to keep hitters guessing.”

Outlook: The Panthers are already underway and gave Baker his 500th career victory in their opener against Quakertown. Seniors Zach Smith (VMI) and Owen Taylor were both significant contributors two seasons ago, but like many others around the area Perk has plenty of young players trying to get up to speed. “For us to be successful we will need to bring all facets of the game together,” coach Ken Baker said. “We are struggling early on to successfully mesh our pitching, offense and defense for a full game. We have several young players learning the system and we will improve as the season goes on.”

“Our senior leadership is definitely one of our strengths, as they go our team will go.”

Outlook: The Vikings were upperclassmen heavy the last time they officially took the field, so PV has almost no official varsity experience. Ignoring the 2020 cancelled campaign, PV brings into 2021 a streak of five straight seasons (2015-19) making the District 1 playoffs. “This group is looking forward to competing on the field after losing a season last year due to COVID-19,” coach Ryan Hinkle said. “There is only one player on the roster with varsity innings, so players will look to compete for playing time.  This group is energetic and hopes to improve upon performances of prior teams. The PAC is one of the most competitive conferences in the state, and we hope to remain competitive throughout the season.”

Outlook: The Phantoms enter 2021 as the league’s last champion, winning their first PAC title in 17 years two seasons ago. Though many of the faces from that squad are gone, pitchers Drew Kingsbury and Jason Bilotti started and closed the championship contest, while senior Justin Geiger was the backstop for the championship squad. Just like in 2019, Phoenixville has a senior-laden group with 13 seniors. “Our pitching is a strong point for our team this year,” coach Geoff Thomas said. “We need to fill in puzzle pieces and find the best positions for players to keep their arms healthy. I am excited to see the guys in action. Our goal will be to utilize our pitching strengths, play solid defense, and execute offensively. We can’t wait to get going. These boys deserve the opportunity for a successful spring.”

Outlook: Junior Nik Rubendall and senior Matt Kossey have varsity experience. The Golden Panthers will compete at the Class 4A level again in the postseason. PJP hasn’t won a postseason game since winning a Class 3A District 1 and PIAA titles in 2014 and coach Charles Deluzio would like to get the program headed in that direction again. “We are a young team but very talented,” Deluzio said. “This team is ready to break out. (We’re) looking to compete for a Final Four spot this year and get a lot of playing time for the young guys. Phoenixville is defending 2019 PAC champs from our division and that will be a challenge. We have a lot of pitching but need to play solid defense behind them and on offense we need to move runners and play team baseball.”

Outlook: The Falcons earned their first district playoff appearance in three decades and the program’s first district playoff win in 2019. Despite losing 10 seniors, Pottsgrove still has three holdovers from the historic group in seniors Avery Spencer (Radford), Cooper Fiore (Misericordia) and Steven Rinda (Misericordia). Fiore, a second team All-Frontier catcher in 2019, is one of just four all-league players returning this season. “Graduating 10 seniors last year in the cancelled season, most of whom were starters as juniors, younger players will need to step up and be thrown on the big stage quickly on the fly,” coach Jamie Nash said. “We will lean on the experience that Rinda, Fiore and Spencer bring from their time on varsity as sophomores as we advanced in districts.  The younger players have been eager to learn and committed to working hard every day at practice. The program will look to continue to grow this season and gain valuable experience.”

Outlook: Like many others, the Trojans are limited in varsity experience, but coach Chris Petro thinks his team’s depth on the mound willl be a strength in the condensed 2021 season. The Trojans will compete with Pope John Paul II in District 1’s Class 4A postseason. “We have put an emphasis on mental health and mental preparation,” Petro said. “Baseball is a game of confidence, so being able to handle failure when it happens and being able to overcome the obstacles that might otherwise stand in our way will be the key to our success this year.”

Outlook: The Rams graduated 14 seniors from last year’s team that never took the field for an official game, including most of their pitchers. Spring-Ford still has some exciting talent on the mound, including Wagner College recruit Michael Cunningham and several others committed to play in college, but the Rams have little to no PAC varsity experience across the board. “We have some talented arms if they can develop into game ready pitchers,” coach Rick Harrison said. “We have two very strong senior catchers and are also returning quite a bit of positional players we are excited about. “Our goal is always to try to improve every day, play unselfish and fundamentally sound baseball with energy. If we do that all season, we will hopefully be competing in the postseason. That is always our goal.”

Outlook: Upper Merion had five freshmen and sophomores see action when the Vikings last took the field in 2019. Seniors Brandon Colon and Ben Eyer and junior Gus Costello all have varsity inning on the mound under their belts. Colon was a second team All-Frontier pitcher in 2019 and should give the Vikings a reliable arm to lean on once again.

Outlook: Upper Perk has four varsity players back from the 2019 District 1 playoff squad. Senior Malachi Duka was a second team All-Frontier pitcher and nearly hit .300 two seasons ago. Second baseman and pitcher Evan Shade also started as a sophomore. “We have talent but many haven’t played games in two year,” coach Frank Mercon said. “We will need to be patient to work off the rust and hopefully arms can stay strong.”

“Our youth right now is very exciting. The future is bright.”