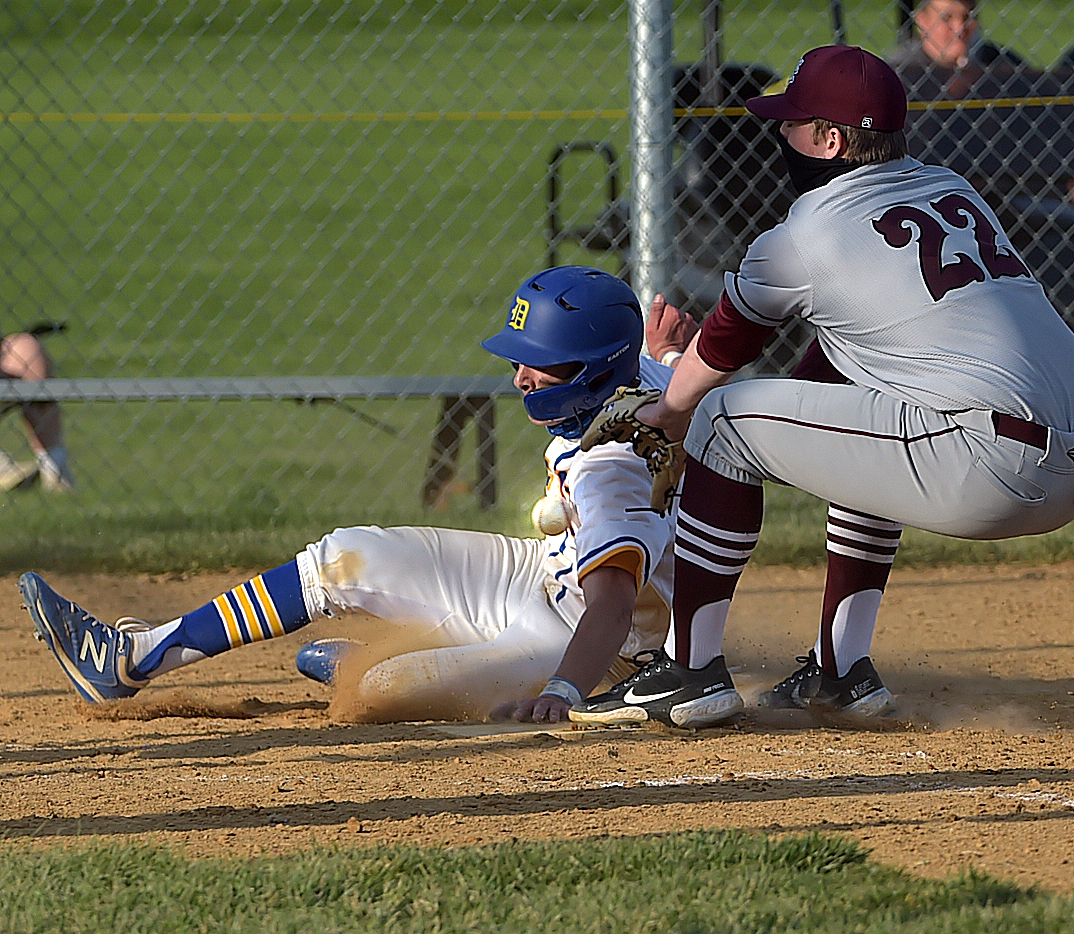 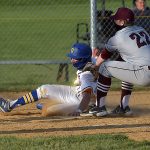 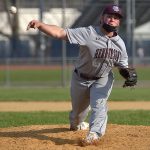 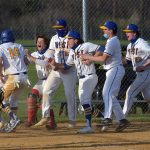 Downingtown West players congratulate (14) Greyson Kovitch after he scoredon a passed ball to send the Whippets to a 5-4 comeback victory Monday evening over West Chester Henderson. 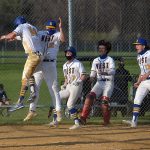 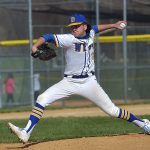 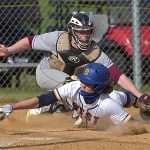 Downingtown West’s (16) Connor Blence is tagged by West Chester Henderson catcher Owen McCarthy but the ball popped out to allow West to score their first run. 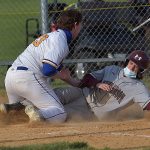 Downingtown West’s (23)Drew Turner tags out West Chester Henderson’s (2) Andrew Dermond. The Whippets went on to a 5-4 victory in their final at bat. 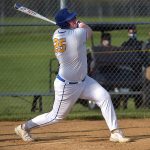 Downingtown West’s (25) Cooper Young stroked a two run homerun in the sixth inning to tie the score against West Chester Henderson. The Whippets went on to a 5-4 victory in their final at bat. 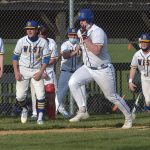 Downingtown West’s Cooper Young is cheered as he scores after stroking a 2 run homerun to tie the game in the sixth inning against West Chester Henderson. The Whippets went on to a 5-4 comeback victory Monday evening.

DOWNINGTOWN >> The Downingtown West baseball team has a long history of winning tight games in the Ches-Mont League.

Before last season was cancelled due to the COVID-19 pandemic, the Whippets had won four of the past five Ches-Mont National Division titles. Monday afternoon at Downingtown West High School, the Whippets showed once again they are the team to be reckoned with this season.

Sophomore Cooper Young launched a towering two-run homer in the bottom of the sixth inning to tie the game and the Whippets won it in the seventh on a wild pitch as Downingtown West downed West Chester Henderson, 5-4, in a thrilling Ches-Mont National clash.

The visiting Warriors (1-1 Ches-Mont, 1-2 overall) got a fantastic pitching performance from junior Eddie Smink, who struck out 13 Downingtown West (3-0, 3-0) batters in six innings, including a stretch of seven in a row. But, with a man on first and two outs in the bottom the sixth, Smink left a fastball out over the plate and the big sophomore Young absolutely crushed it to make it a 4-4 game after six innings.

“He is a really good pitcher and I was just trying to get my bat on the baseball and put something in play,” Young said. “And then he left a fastball out over the plate and I got a good swing on it and it left the park. Our pitchers kept us in the game. David is our ace and then a freshman, Drew Turner, came in and Connor pitched the seventh inning for us. So, our pitchers really kept us in it today.”

Downingtown West starter David Catanese pitched five innings and struck out 10 Henderson batters, although he walked five. Catanese had one tough inning in the top of the third when Henderson scored three runs on two hits. The big blow was a two run double by Eric Angle and the Warriors held a 3-1 edge going into the bottom of the fifth inning.

The Whippets scored a single run in the fifth when Greyson Kovatch singled with one out and scored on an RBI double to center field by Jack Benis. Kovatch had three hits on the day and Benis was up in the bottom of the seventh when the winning run scored on a wild pitch.

After Henderson scored a single run in the top of the sixth to make it a 4-2 Warrior advantage, the Whippets came right back off Smink. Cole Blench led off the inning with a clean single to center. Smink then struck out Jack Ginsburg and Zach Gardner to have a man on first with two out. Young then launched his long home run to deep left field and it was a 4-4 game after six innings.

“Cooper is very strong and he absolutely crushed that ball,” said Downingtown West coach Scott Rambo. “Eddie Smink is a real good pitcher and he was striking out a lot of guys. So before the fifth inning we talked and told the kids not to try to do too much up there. We wanted to take the ball the other way and shorten up our swings and then Cooper hits that bomb for us.”

Henderson got a leadoff single from Zach Klein to lead off the seventh inning. Kevin Wheeler laid down a sacrifice bunt to move Klein to second base with one out. After a ground out by Dean O’Neill for the second Warrior out, Whippet reliever Connor Blanche struck out Dylan Grim looking, setting up the bottom of the seventh for the home team.

Henderson went to the bullpen after the sixth inning and Jackson Rutecki entered theme. Kovatch led off with a single and went to third base on a Ben Morse single, putting two men on with nobody out in a 4-4 game. On a 1-1 pitch, a ball in the dirt squirted to the backstop, sending Kovatch speeding across the plate and Downingtown west had a 5-4 victory.

“We hung in there today and the kids showed fight,” Rambo said. “David had one rough inning for us but he pitched well and then our freshman Drew Turner threw an inning and Connor gave us a chance to win it in the seventh by shutting them down in the top half. Important win for us.”