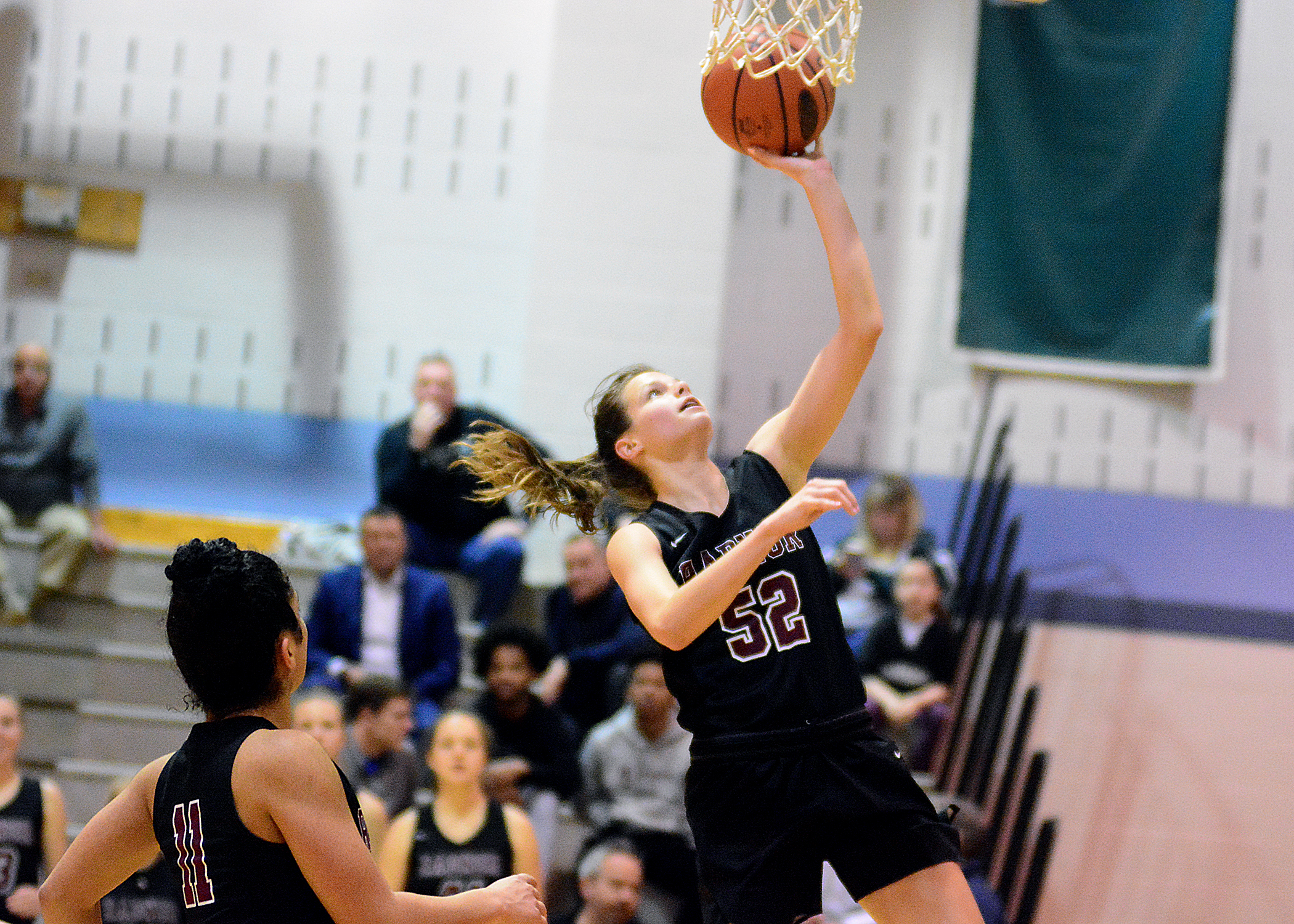 Sally Austen goes in for a layup during a District 1 playoff game last February. Austen scored all five of her team's overtime points to lead Radnor to a 43-42 victory in Saturday's District 1 Class 5A playoff opener at Marple Newtown..

The senior guard/forward’s play was aggressive in crunch time Saturday at Marple Newtown. She delivered all five of her squad’s points and came up with a big defensive rebound in overtime.

Austen had a basket and went 3-for-4 at the free-throw line to lead No. 10 Radnor to a dramatic, 43-42 victory over seventh-seeded Marple Newtown.

Austen was cool in crunch time for Radnor, which travels to another fellow Central League opponent, sixth-seeded Harriton Wednesday for a second-round contest.

“I think everybody just brought the energy today and that helped us,” said Austen, who totaled 11 points, including six in the first period. “We were excited to play and get the win.”

Down the stretch, Austen ran the point. It’s not her natural spot on the floor, but coach Mark Jordan entrusted her to engineer the offense with Radnor’s season on the line.

“It’s all about the team effort,” she said. “Everybody knows that I might turn it over a couple times, but we keep trying. We all get back on defense and help each other out.”

Jordan’s teams usually begin to shine this time of year year. “RGB” typically flies under the radar. Back in 2014, the program came out of nowhere to win a District 1 title. In a normal year, perhaps Radnor would be feeling pretty good about its chances of qualifying for the PIAA tournament, but this year only the district champion advances to states. Thus the road becomes much harder in 2021, but if there’s an underdog that can pull it off, it’s Jordan’s gang.

“I’m just extremely proud of the girls,” he said. “This is our 14th straight year we’ve been in the district playoffs, which is a pretty good stat for us. Make sure you mention that. … We’re playing in March for the sixth time in eight years, that’s a wink-wink because it’s not states, but still pretty good for us. And, you know, it’s a credit to the girls. We have a bunch of girls who play hard, they’re not AAU, most of them are lacrosse kids and not basketball kids. They’re gamers.

“Our mindset today was, let’s keep getting up and down the court and wear them down a little. We had fouls early, too. Cierra (Hopson) and Ellie (Rinehart) played with four fouls in the second half and they’re two of our key starters. So, we had to battle and the kids really stepped up.”

Radnor trailed by eight points early in the fourth quarter after MN junior Haley Levy made a 3-pointer. The Tigers tried to take the air out of the ball around the midway point of the quarter, but once Jordan called for his team to press, the tide started to turn in Radnor’s favor. Rinehart made a basket to cut the Marple lead to 38-36 and seconds later Margaret Mooney tied the game at the foul line.

“I think we all knew we had to give it our all. Every single person played a big part in this win today,” said Mooney, who added 11 points, seven rebounds and two blocks. “Even when we were down in the fourth quarter, we felt the pressure but we still wanted to win. I don’t think we ever lost motivation during the game.”

The Tigers had a shot to win the game with 12 seconds left in regulation, but Radnor’s defense stood tall. The Tigers were unable to get a shot off before the period came to a close.

Ellie DiBona swished a game-tying 3-pointer in the extra session. Austen made a free throw with 31 seconds left to put Radnor ahead to stay. The Tigers had the last look, but Mooney and Hopson disrupted Mackenzie Hilden’s final shot as time expired in overtime.

Radnor avenged its regular season loss to Marple Newtown. On Wednesday it will try to do the same against Harriton.

DiBona scored a game-high 14 points and Levy added 11 for the Tigers.