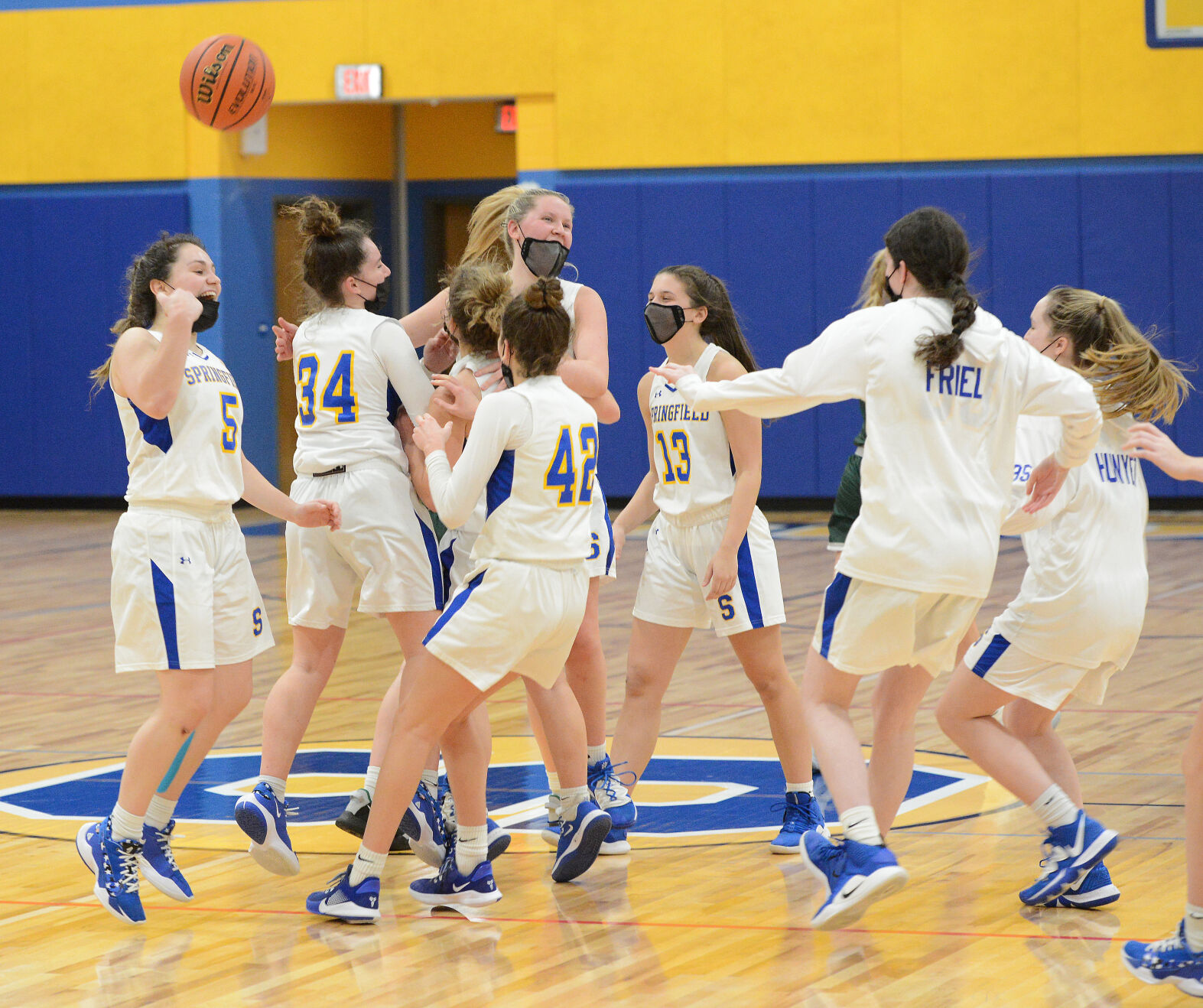 SPRINGFIELD — Even with so much uncertainty about school and the basketball season, Rachel Conran wouldn’t trade Thursday’s scene for anything else in the world.

No, she hasn’t been able to enjoy a normal senior year at Springfield. She and her peers have had to follow the rules and remain diligent during the pandemic, uncertain as to what the next day may bring. Conran’s a great team leader, on and off the court, alongside her classmate and co-captain Alexa Abbonizio.

Both were tasked with keeping the Cougars together during these trying times, a team that aspired to go undefeated in the Central League and bring a championship back home.

So, Conran stood on the floor of Springfield’s new school gym Thursday night, taking in the moment after scoring 21 points in the Cougars’ 59-44 victory over Ridley for the league title.

“After all that’s happened this year, it’s great that we are the first team to win a championship in the new school,” Conran said. Springfield’s Rachel Conran puts up a shot in the fourth quarter as the Cougars defeated Ridley 59-44 to win the Central League final. (PETE BANNAN/MEDIANEWS GROUP)

The Cougars avenged their 2020 championship loss to the Green Raiders and will begin their quest for a second straight District 1 Class 5A title next week as the top seed in the tournament.

But Thursday night, it was all about Central League glory. Springfield’s seniors made it to the final all four years, but hadn’t won since they were freshmen. Conran and Abbonizio were key players on that 2017-18 Cougars squad. On this night, they played like the veterans they are, combining for 38 points.

Abbonizio scored 13 of her 17 points in the second half and went 11-for-12 at the free-throw line.

“It’s amazing,” said Abbonizio, who last month became the program’s all-time leading scorer. “We had the crowd behind us in our new gym, undefeated on the floor, and we were the first team at Springfield that won a championship in the new school. That’s something to be proud of and I think everybody on the team, all 13 of us, should be proud of that.”

Of course, it wasn’t easy. Springfield knew it was in for a fight against the reigning league champions. Thanks to seniors Lindsay Boyd, Kylie McNicholas and Shannen Hinchey, Ridley was in a good spot after three quarters. Boyd, who scored a team-high 14 points, and McNicholas (12 points) combined to hit three 3-pointers in the second quarter. Boyd’s trey gave the Green Raiders a five-point advantage in the second period, their largest of the game. Junior guard Emily Liberio scored a layup with 1.2 seconds left in the first half to put Ridley up a point at the break. “We knew coming in that they were going to be ready for us and we knew that we were going to have to do more than usual, work extra hard for our shots,” said Conran, who scored 10 of Springifeld’s 12 points in the first quarter. She finished 8-for-12 from the field, grabbed a team-high seven rebounds and supplied two assists.

“Alexa was on fire in the second half, she was great,” Conran added. “Anabel Kreydt did an amazing job finishing to the basket. Everyone just did their part and did what we needed to do. But we knew going in it was going to be a battle.”

Abbonizio said she “had to change my whole mentality” after being limited to only four field goal attempts and four points in the first half. So, she got aggressive. As coach Ky McNichol put it, “everybody knows she’s a deadly 3-point shooter” and Ridley coach Roe Falcone had an excellent game plan. Boyd blanketed Abbonizio in the first half. Instead of trying to bank shots from long range, Abbonizio started driving to the basket more often after halftime. It was an effective strategy. When she didn’t convert from the floor, she got to the foul line and banked her freebies.

“We came out (in the second half) saying that they weren’t winning on our home floor,” Abbonizio said. “You’ve got to give credit where credit is due. Lindsay Boyd hit clutch shots for them. They went on a run, then we went on a run. It was back and forth most of the game. You’ve really got to give credit to Lindsay and No. 2 McNicholas, she hit some big shots for them. But coming into that second half, we knew we had to put it away.”

Kreydt, a sophomore, scored all 10 of her points in the second half. Most of her baskets were cuts inside the lane. She provided strong defense on Hinchey and Boyd, too.

“Everybody contributes and you’ve just got to do your job when your team needs you,” Kreydt said.

“We talked as a coaching staff at halftime and we switched some of the matchups, putting some of our better defenders on their kids who were scoring in the first half,” McNichol said. “We put Anabel Kreydt on Lindsay Boyd to limit some of her opportunities in the second half.” Springfield’s Rachel Conran, right, gets her hands on the ball as Ridley’s Emily Liberio tries to shoot in the third quarter Thursday night in the Central League championship game. Springfield went on to a 59-44 victory. (PETE BANNAN/MEDIANEWS GROUP)

Abbonizio hit a basket at the end of the third to give Springfield a 38-37 lead. McNicholas hit a free throw to tie the game at 38, but from that point onward, it was all Springfield. Conran hit a floater driving to the basket then sank a 3-pointer to make it a 43-38 game. Hinchey drilled a 3-ball to cut the Ridley deficit to two points, but Springfield closed the game with a 15-3 run.

“As a coaching staff we said to the kids that we didn’t know if we were going to get this opportunity when in December we were shut down for three weeks,” McNichol said. “And we have the opportunity, so go out and seize the moment, right? We won a championship in our brand new gym. How special is that? What a way to open the new gym in style.”