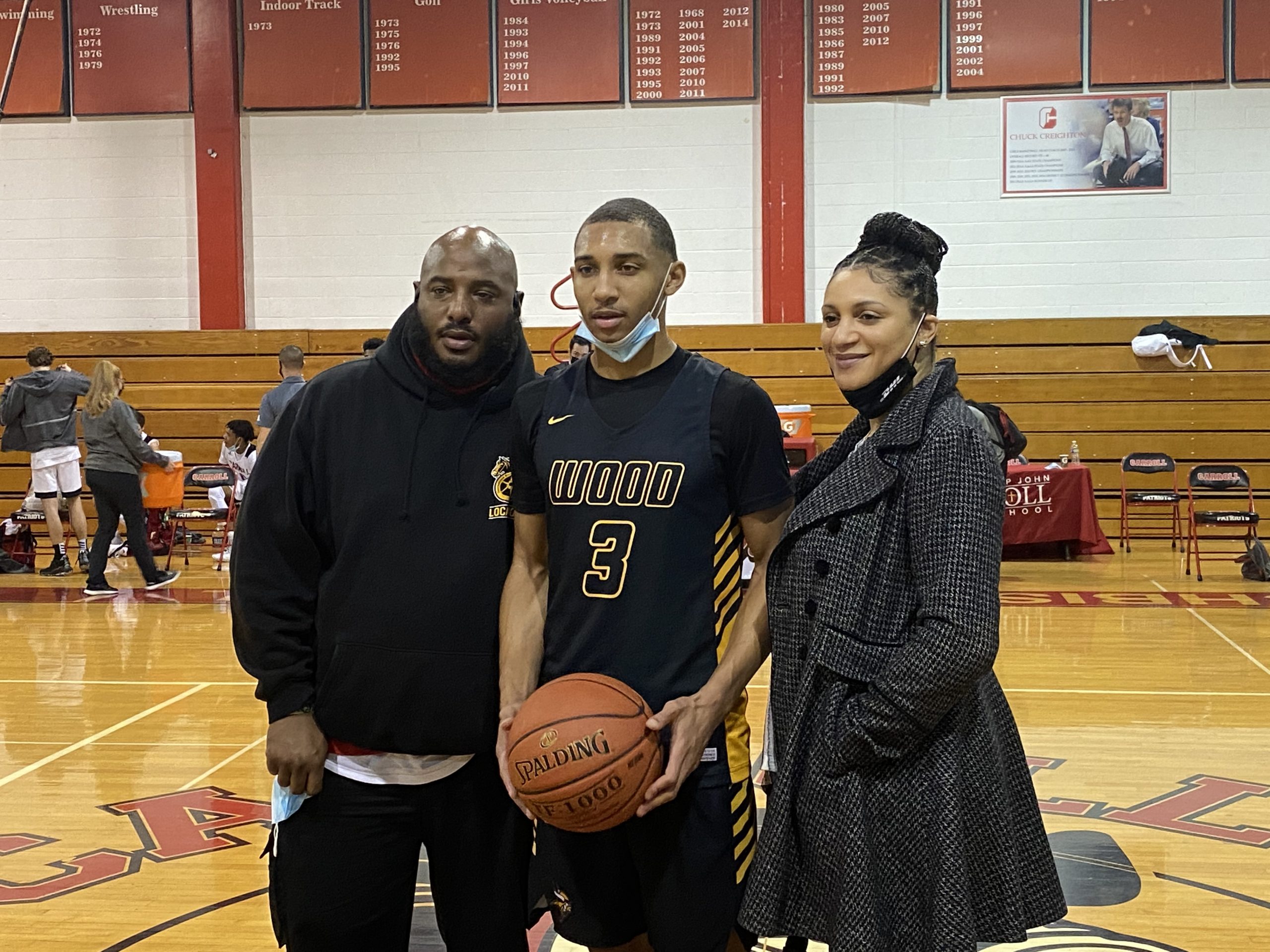 RADNOR >> Rahsool Diggins connected on a corner 3-pointer early in the fourth quarter and with it became the top scorer in Archbishop Wood boys basketball history.

But briefly after the shot sailed through the net, the Vikings’ standout senior guard was not aware of it.

Diggins was quickly filled in. Wood’s Philadelphia Catholic League contest with host Archbishop Carroll was paused with 6:45 left in the final quarter to recognize the UConn commit’s feat of passing the previous record of 1,386 points scored by 2018 graduate Tyree Pickron.

“I told him about a couple days ago when the tweet came out that I was about 88 points away I told him he got four games to enjoy it,” Diggins said. “He embraced it, he was like congratulations. He proud of me – that’s my big brother.”

Diggins finished with a game-high 25 points Wednesday night and Wood used a strong second quarter to build an eight-point halftime lead, pushed its advantage up to 21 after the break and stayed unbeaten with a 94-79 victory over the Patriots.

“It’s a good accomplishment,” Diggins said. “Just from going to scoring about 100 points freshman year to scoring over 1200 in a matter of three years that’s a great thing. But we still got work to do, still got to win. That’s the main goal.”

Diggins came into Wednesday 20 points shy of the mark set by Pickron – now playing at Quinnipiac University – and was still at 20 after the opening eight minutes, going scoreless a first quarter that ended with Carroll up 23-18.

But in the second quarter, Diggins found his offense, registering nine points – including the first five of a 9-0 run that gave Wood the lead for good – as the Vikings (11-0, 11-0 PCL) regained their defensive focus and outscored the Patriots 23-10 for a 41-33 halftime advantage.

“We go as he goes,” said Wood coach John Mosco of Diggins. “He was just going through the motions in the first , there’s a lot of pressure on him to get that number and I don’t think his parents were in the building yet and then he started really playing. Guys were finding him and he was finding guys. Diggins opened the third with a 3-pointer and totaled nine in the quarter to leave him three points away from taking top spot in the scoring list. He got them all as Daeshon Shepherd kicked a pass out to him in the right corner for his third trey of the night and a 71-55 lead.

“That’s real big for us cause we’ve been playing together for so long, since (we were) young,” said Wood’s Marcus Randolph. “So when he gets records like that it just makes us all proud cause he worked hard for it.”

It was the second time Diggins reached a career achievement on Carroll’s home floor, having scored his 1,000th point in the gym last season in an 80-61 Vikings’ win Jan. 31, 2020.

“It just brings back memories,” said Diggins, who ended the night with 1,391 career points. “My freshman year, we got torched in this court twice so everything I come out here I want to put on a show, play hard. Now, I don’t want to lose on this court no more.”

BOYS #BASKETBALL: @WoodBoysBball forces a turnover which leads to @RahsoolDiggins3 dishing to @Dshepherd022 for the two-handed slam 2Q vs. Archbishop Carroll. pic.twitter.com/vgy7dZHH3h

Archbishop Wood pushed its lead to as large as 21 in the fourth – the last time at 80-59 – but the Patriots did not go quietly, putting together a 13-4 run to cut the margin to 84-72 after Caleb Carter scored on a drive. But Carroll (5-6, 4-6) could not get any closer than a dozen and lost its second straight.

“I’m lucky, getting great kids to come here and they believe in our system and my coaches we preach sharing the ball but also scoring,” Mosco said. “(Diggins) played as a freshman and he’s gotten better every year as we went on, that’s why he’s going to UConn. And he really works at it. And he’s a tremendous kid just like Tyree.”

Carter went off for 13 points in the fourth and paced Archbishop Carroll with 22 points. Moses Hipps hit four 3-pointers in scoring 21 points while Anquan Hill chipped in 19 points.

The first quarter had nine lead changes with Carroll holding a 23-18 advantage at the end of it after Carter connected on the last of the Patriots’ four 3-pointers in the period.

Carroll was still up five at 27-22 after a Hill dunk but Diggins ripped off five straight – knocking down a three to knot things at 27.

After Wood forced a turnover in the backcourt, Diggins dished to Shephard for a two-handed slam and a 29-27 lead. A Newton steal and dunk had the Vikings up four.

“I have a lot of confidence in myself,” Diggins said. “So I don’t get down on myself, I just keep playing. I know I’m going to make shots. And I know my teammates, they give me open shots. I think in the first quarter I was just forcing the issue instead of letting the game come to me and that was the problem.”

BOYS #BASKETBALL: @WoodBoysBball’s @RahsoolDiggins3 slices in from the left wing for 2 3Q vs. Archbishop Carroll. pic.twitter.com/4KssiuhmhK

A Hipps basket had Carroll within 35-33 but Wood scored the half’s last six points – Randolph with a three then a free throw with 52.4 seconds followed by Diggins converting a drive for a 41-33 lead at intermission.

Diggins’ trey to start the third put Wood up first double digit for the first time. The Vikings’ lead got as big as 18 in the quarter at 59-41 after two Shepherd free throws at 3:21. Hipps scored the next five while two Hill free throws had Carroll down 59-48 with 2:01.

Stinson snapped the 7-0 run by dropping in a floater with Diggins’ two foul shots at 1:04 putting Wood up 15 before a Hipps trey made it 63-51 entering the fourth.

The Vikings began the final quarter with a 17-8 run. Randolph followed Diggins’ milestone trey with a three-point play at 6:21 while a Stinson jumper had Wood leading 76-55. The visitors went up by 21 twice more, the last at 80-59 on a Shepherd basket.