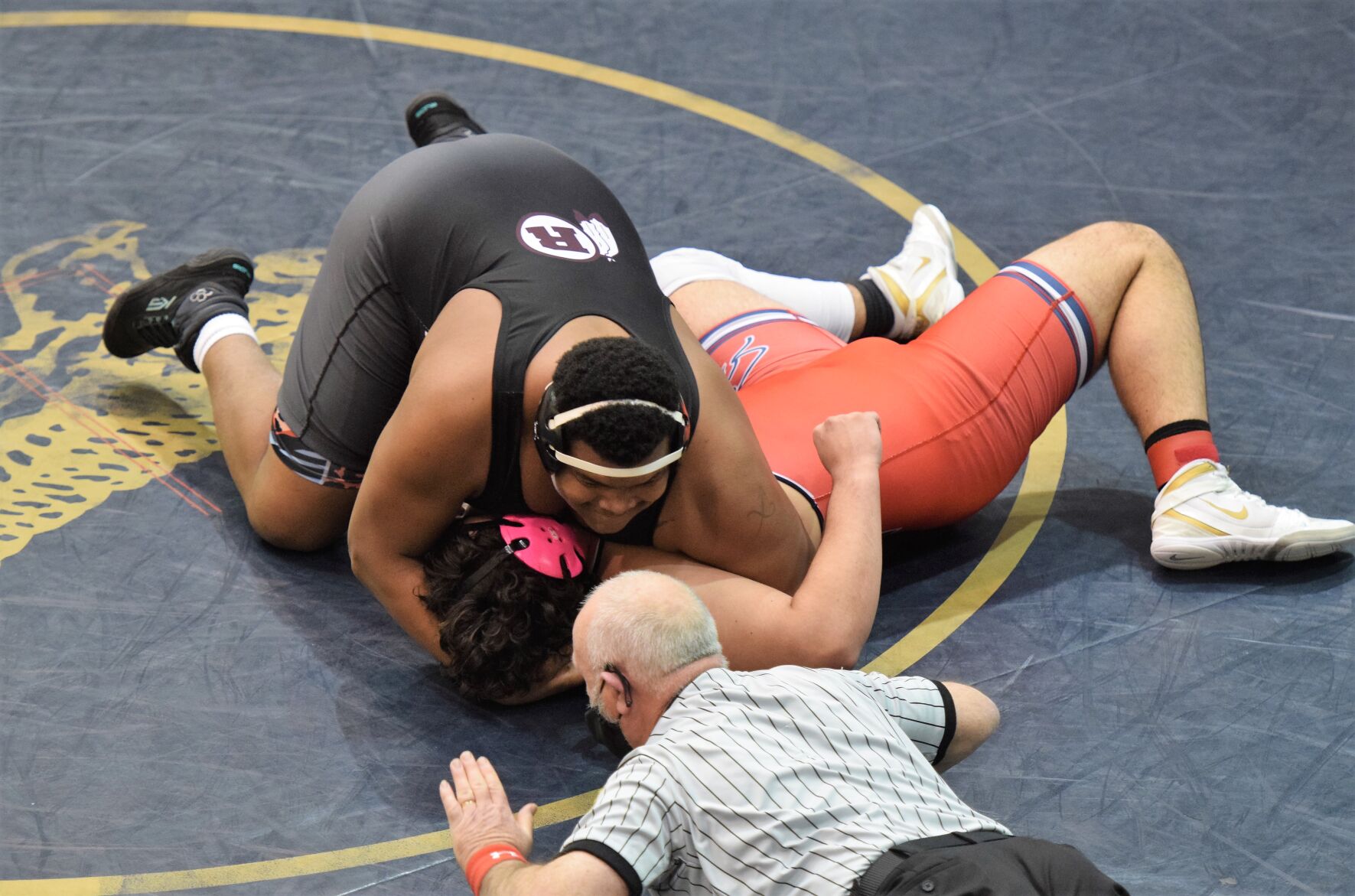 HOLLAND — Daetrel Jerome was at home Friday, having lunch, when he noticed he had a text message from Radnor wrestling coach Justin Schellenger.

“He told me to call him ASAP,” Jerome said.

He immediately phoned Schellenger and found out his wrestling season was not over. Strath Haven’s Ben Farabaugh had to pull out of the PIAA Class 3A South East Regional due to COVID-19 contract tracing, and his misfortune opened up a spot for Jerome.

First, though, Jerome had to finish his lunch, which was a typical teenage feast.

“I was having a bowl of Fruity Pebbles,” Jerome said. “It was a big bowl. It hit the spot.” Jerome wasn’t about to let his sugary cereal go to waste, even though he had to lose at least six pounds in the next 20 hours to make weight to able compete in the tournament at Council Rock South High School Saturday morning.

Jerome had to get down to at least 287 pounds to compete in the heavyweight division. He did so with a pound to spare and then went out and finished fourth to earn a trip to next week’s Class 3A East Super Regional at Quakertown High School.

“I wasn’t worried (about making weight) because I’ve done it a lot this year,” Jerome said. “I hopped on the (stationary) bike for 40 minutes, maybe more than 40 minutes and I was able to do it.”

Jerome took the hard way to the Super Regional. He was pinned by Council Rock North’s Max Harar late in the second period of his opening match. He bounced back and pinned Pottsgrove’s Manny Allen in 2:26 in the first round of consolations, and then decked Mike Miller of Plymouth Whitemarsh in overtime to punch his ticket to Quakertown before getting pinned by Frederick Retter of Quakertown in the third-place match.

Jerome was driven to succeed, even though he only had two workouts during the week, one on Monday and then again on Friday after he received the news that he was a last-minute replacement.

“I didn’t make it to states last year,” said Jerome, who missed a trip to Hershey by one spot. “I feel like I’m at the point where I can make it.”

Schellenger wouldn’t be surprised if Jerome made his way to Hershey.

“He’s like a home run hitter,” Schellenger said. “He always has something in his back pocket to win a match.”

One of the highlights of the meet was D’Agostino’s 9-7 victory over Barlow in the semifinals. It was a matchup of two returning state qualifiers and the first time they wrestled against each other.

“My main goal was to stay on my feet,” D’Agostino said. “That’s where I wrestle the toughest. I wanted to get to my feet even when I was on the bottom, getting to my strong position and I think that’s where I won.”

Barlow bounced back with a 5-1 win over his second cousin, Josh Barlow of Kennett. It was the first time the cousins squared off in a match.

“It was a little weird, but nothing changed,” said Chase Barlow, who then beat Spring-Ford’s Zach Needles, 8-2, to take third place. “I went out there and wrestled the same.”

Ricci was not satisfied with just making the regional, something the junior failed to do as a freshman and sophomore. He wanted more and made his presence felt early with a 10-3 victory over Todd McGann of Quakertown in the first round. It was Ricci’s third career victory over McGann.

“It was awesome to see all the hard work pay off and take it to the next level,” Ricci said. “I knew I had to get some big wins and I was able to get it done. Winning the first one is nice. Last week I had to wrestle all the way back. I was confident in myself and I knew I could beat him.”

Catka put on a dominating display. He won by technical fall over Truman’s Chase Moeller in the first round, scored a 17-5 major decision over Carl DiGiorgio of C.B. West in the semifinals and then beat Quinn Collins from C.B. East in the final, 5-1.

Laventure won in workmanlike fashion. He beat Retter, 5-3, in the quarterfinals, knocked off Miller, 6-1 in the semis and then pulled away for a 12-6 victory over Harar in the final.

NOTES >> Only the top four finishers in each class advanced, but medals were awarded to the top six. Ridley’s Kevin Rainey (138) and Garnet Valley’s C.J. Wood (145) finished fifth, while Sun Valley’s Shane Holefelder (126), Garnet Valley’s Griffin Hollingsworth (132) and Interboro’s Shalom Thomas (215) were sixth. … The East Super Regional will be conducted in two sessions. The first session is for weight classes 106-138. It starts at 8 a.m. and runs through the consolation finals, which are scheduled to start at 12:30. The gym will then be cleared and the 145-285 matches will start at 3:30 with the finals and consolation finals slated to begin at 7:15. The top four wrestlers in each class advance to the PIAA championships.