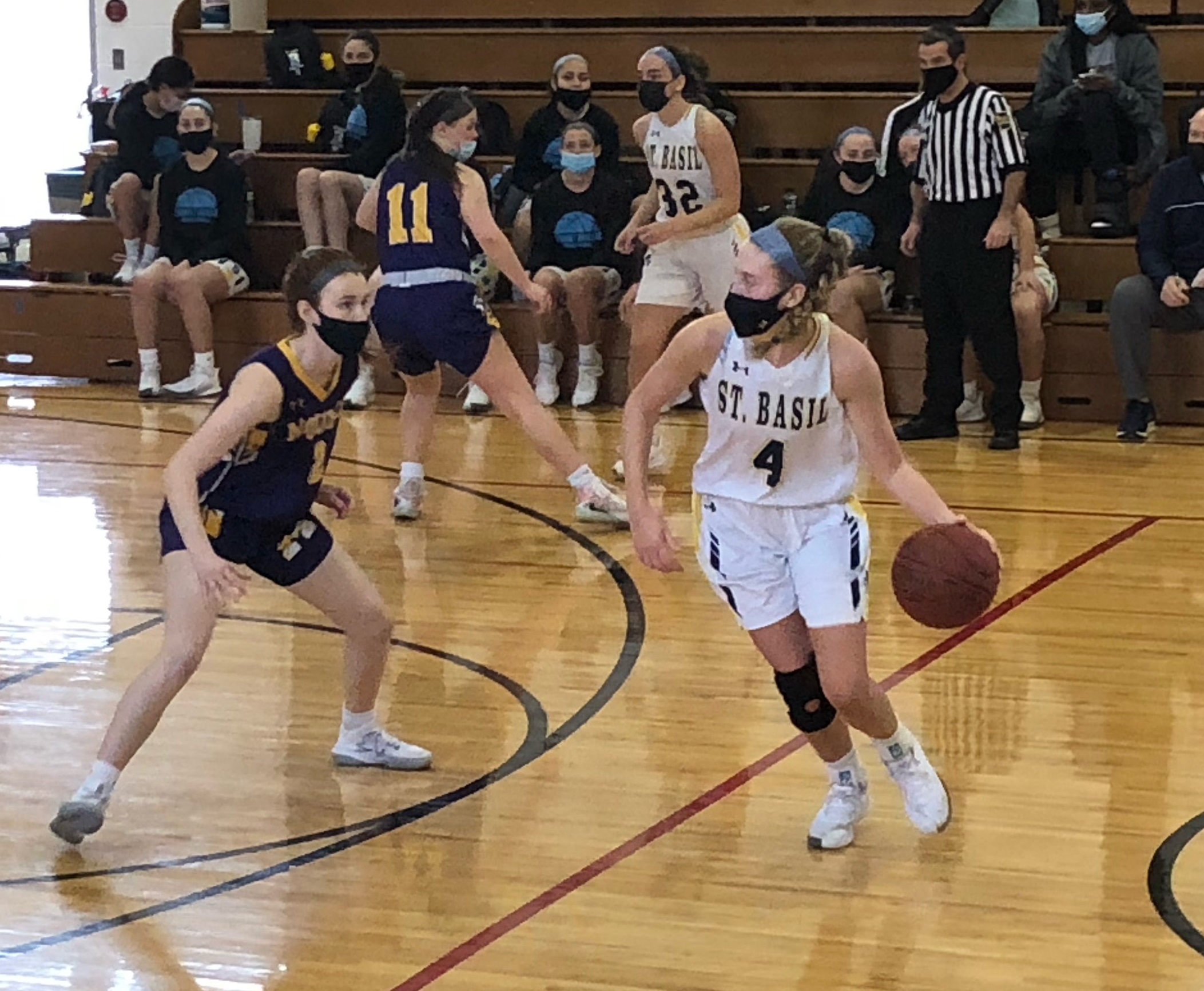 ABINGTON >> It the felt the same as a week ago but this time, St. Basil Academy was prepared for it.

For the second time in six days, a furious rally by Mount Saint Joseph had cut the Panthers’ lead to one possession in the fourth quarter and once again, St. Basil found a way to fend off the Magic. With the winner getting a trip to the AACA title game, the No. 2 seeded Panthers didn’t want to lose out on a chance to defend their title.

With their top scorer sidelined, the Panthers came together to top the No. 3 seed Magic 50-49 on Saturday, setting up a clash with No. 1 Gwynedd Mercy Academy in Monday’s AACA title game.

“You have to go into a game like this knowing you can’t have a late start because it’s hard to come back from it,” Panthers point guard Tori Nigro said. “We had to be aggressive from the start and I wanted to take on that role.”

Panthers senior Denae Carter, a Mississippi State recruit, missed her second straight game after injuring her ankle in last Sunday’s win over Mount Saint Joseph. Without the forward’s 23 points and 12 rebounds per game available, plus senior Shannon Remolde already being out for the year, the Panthers needed a group effort to close out their gym with a win.

Riley Scannell, also a senior, said getting back to the league title game was a priority with the school set to close at the end of the academic year.

“It was already important for us to go back, but even moreso this year when we found out St. Basil is closing,” Scannell said. “We’re the last basketball team to be here, there is no next year so we had to make it back this year. It was a lot more important to us to do it this year, even with Shannon and Denae being hurt.”

Nigro, in her first year with the program after two seasons at Archbishop Ryan, helped pick up the slack with a 26-point game to go with her role as the primary ball-handler offensively. Scannell and junior Sammie White got more shots up than usual but the Panthers’ secret weapon was junior Michaela Joniec.

Joniec was the only player to come off the bench on Saturday but was absolutely pivotal in the win with 12 points, including six in the final quarter.

“She played well Tuesday against Gwynedd and was a spark for us then as well,” St. Basil coach Terry Mancini said. “She had a really good year on JV, she got herself into shape which helped her a lot and she’s strong as an ox, if someone comes down with the ball against her, she’s likely going to be who comes out of it.”

St. Basil, which has won the last four AACA titles, lost its regular season finale at Gwynedd Mercy Academy on Tuesday in its first game without Carter. Nigro said it wasn’t the performance her team was looking for and having to adapt without their all-state senior was a challenge but one that they worked at the rest of the week.

“My teammates were great,” Nigro, who shot 9-of-14, said. “They got me open shots and on backdoor cuts, Riley hit me with a nice one in the fourth quarter. We played tough and included each other in the game.”

Mount Saint Joseph had a good start to the game, taking a 9-2 lead before Nigro and Joniec led the Panthers on an 8-2 run to close the first down just 11-10. St. Basil took its first lead at 18-17 on a three by Nigro, who scored 12 points in the first half, but an offensive rebound and putback by Magic senior Grace Niekelski gave the visitors a 19-18 advantage at the half.

After an even first half, the game changed in the third quarter when the Panthers used an 11-0 run to take the frame 18-6 and a 36-25 lead going to the final eight minutes.

“We didn’t execute what we were supposed to do, it’s that simple,” Mount coach Matt Feeney said. “You can’t beat a good team and take a quarter off.”

White scored all four of her points in the third quarter while Scannell chipped in six of her eight including a layup off a pass by Nigro that gave St. Basil a 23-21 edge. Nigro, a junior, gave her team the lead for good on a driving layup with 2:56 left in the quarter that also kicked off the Panthers 11-0 run.

Mount Saint Joseph shot just 3-of-13 in the third and committed four turnovers in the quarter. The Magic, who entered the day No. 8 in the District 1-5A power rankings, were unable to return to the AACA final for a second straight season and will now prepare for their first district game with the tournament beginning March 6.

“We just have to go back to work,” Feeney said. “Districts this year is one-and-done, everybody knows what the stakes are. We have to clean up the things that led to mistakes, we had a number of empty possessions today that weren’t under pressure. Against good teams, which is all we’re going to see moving forward, that won’t win basketball games.”

Joniec, who had an offensive rebound and putback off a missed free throw that concluded St. Basil’s third quarter run, scored the first four points of the final quarter, giving the hosts their largest lead at 40-25 with 5:43 to go.

Led by sophomores Kiersten Pumilia and Lauren Hoffman, the Mount then made its charge. A three by Pumilia, who pocketed eight of her 14 in the fourth, started a 7-0 Magic run and a trey by Hoffman sliced the lead to 42-35 with 2:50 on the clock.

Last Sunday, the Panthers had to adapt on the fly after Carter went down at the end of the third. On Saturday, they expected Mount Saint Joseph’s pressure defense and were more ready to handle it.

“We know how much Denae means to our team but it showed (Tuesday at GMA), we lost by a lot and kind of got down on ourselves,” Nigro said. “The next day at practice, we got back to work and told ourselves this was our last chance and we had to make the best of it.”

Hoffman had a huge fourth quarter, scoring 14 of her team-high 16 in the frame that included eight straight in a 61-second span that pulled the Magic within 46-44 with 49.3 on the game clock. Joniec stopped the run with a pair of free throws and after a hoop by Pumilia again made it a two-point game, Nigro was fouled.

Nigro had the honor of scoring the last points by a Panther player in the school’s gym with a pair of free throws coming with 9.8 seconds left. They also proved to be the winning points when Hoffman banked in a three with 0.9 on the clock, but the remaining time expired before the ball could be inbounded, securing the Panthers’ spot in the league title game.

“We know the atmosphere, even though there aren’t going to be any fans, we’re used to being there, we’re used to the pressure,” Scannell said. “If we settle down and do what we’re taught to do, I think we’ll be fine.”

Nigro is a newcomer to St. Basil but not to her teammates. She plays for the same AAU program as White and was a grade school teammate of Scannell, so the guard understood what playing for the AACA title means being a part of the Panthers program.

The AACA title game will be a 4:30 p.m. start on Monday March 1 at Gwynedd Mercy Academy after the top-seeded Monarchs dispatched No. 4 Villa Joseph Marie 47-17 on Saturday.

“The coaches preach what St. Basil basketball is and I wanted to be a part of it,” Nigro said. “I developed that mindset too when I got here.”