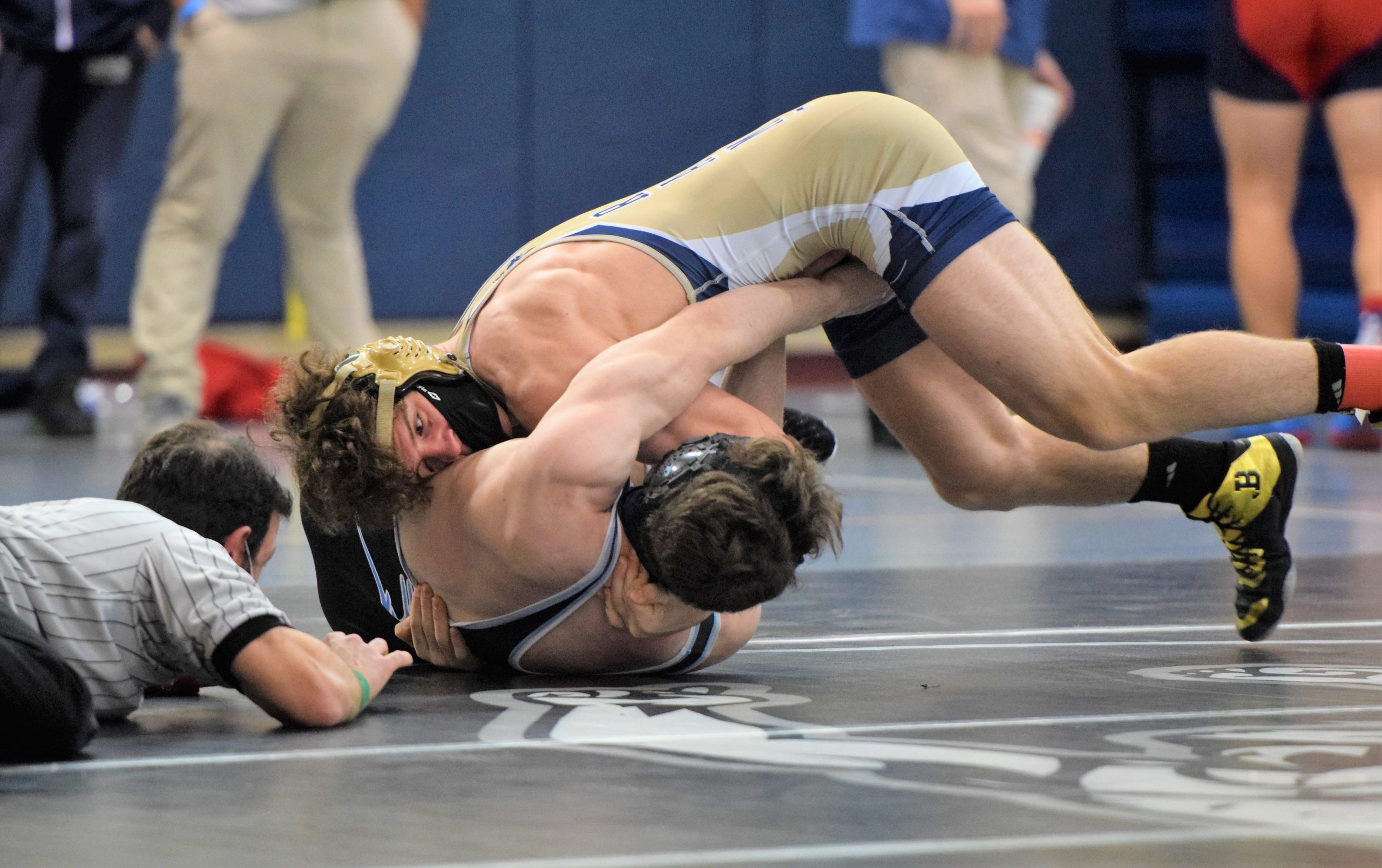 HOLLAND >> In this convoluted high-school wrestling season, where COVID-19 has made routines anything but routine, one fact has been set in concrete-based certainty: Spring-Ford will not be just successful at every level of competition, but champion caliber.

Individually or as a team, regular or post-season, the Rams have been untoppable. That status quo continued this weekend at Council Rock high schools, where they were the class of the South East AAA Regional Tournament.

In all the action at Council Rock’s South and North facilities, Spring-Ford added to its title-securing legacy in 2021. It claimed three weight-class titlists out of five medalists, a haul good enough to be crowned team champion ahead of West Chester Henderson and Quakertown.

Further, the quintet that travelled to the Newtown area Saturday will remain intact for next weekend’s East AAA Super-Regional — a “first step” toward Hershey and gold at the PIAA level. Cole Smith (106), Jack McGill (160) and Joey Milano (189) were champions, Dominic Ortlip (113) placed third and Zach Needles made the four-man per weight class cut by finishing fourth at 152. “It’s consistency,” Needles said of the program’s first regional championship finish. “The coaches have been chasing it for so long.”

The consistency of Milano, in his third visit to a regional tourney, was on display in a big way. The Ram senior (12-0) started the day with falls against Council Rock North’s Blake Silber (1:51) and West Chester Henderson’s Koh Bauman (5;08) before scoring a 2:29 (20-4) technical fall on Garnet Valley’s Sam DiTrolio.

The effort returned Milano to the top of the medal podium for the first time in two years, a runner-up finish interrupted his run.

“This weekend, I focused on wrestling and having fun,” he said. “The next couple weeks, I have to control what I can control. Right now we’re grateful to be wrestling for something.”

For McGill, the gold medal continued his steady climb up the region’s ranks … fourth as a freshman, third his sophomore season and second as a junior. He racked up a major decision (9-0) on Neshaminy’s Andrew Pokalsky and pinned Bensalem’s Talon Pisarchuk in 4:42, capping the day with a 5-2 decision of Council Rock South’s Matt Colajezzi.

“I put him on his back in the first period,” McGill said of his bout with Colajezzi. “He wasn’t that offensive, so I just played it smart after that.

“The first kid I wrestled smart. The second was tough, but I got him on his back in the third.” Smith (14-0) kept his postseason record unblemished with his second title in as many tournaments. Smith was dominant on his way to the finals, using a 57-pin and a 5-0 shutout to get there, and proved wily enough to upend Council Rock North’s returning state qualifier, Tony Burke, 8-6.

“I felt confident going in,” Smith said. “Dom (Ortlip) and I practiced hard all week to get better. I knew I needed to win those first two matches and then I just tried to focus on staying in control and winning the match.”

They ended up the PAC’s lone champions. Boyertown’s Jay Maldonado (120) and Chance Babb (138), along with Perkiomen Valley’s Kelly Kakos (132) all got silver medals as the league’s other championship qualifiers in bouts contested at CR North while the upperweights battled at CR South.

“It was a great day for the kids,” SF head coach Tim Seislove said. “It’s tough to be split up, but everyone contributed. I’m happy for the kids, and getting the opportunity to wrestle.”

Ortlip (12-1) sustained his first loss of the season in the semifinals, a 4-2 decision by Pennridge’s Sam Kuhns after rolling up a 5:22 tech fall on Upper Perkiomen’s Mike Milkowich. But he got back on track by edging Quakertown’s Mason Ziegler, 1-0, in the third-place duel.

Needles (12-1) also lost for the first time in the semifinals at 152, edged 2-1 by Neshaminy senior and weight-class champion Zach Martin. Put in the position of needing a win to qualify for the super-regional, the Spring-Ford senior went overtime for a 3-1 sudden-victory verdict over Council Rock South’s Bekhruz Sadriddinov.

Scoring an escape early in the bout, Needles saw regulation-time victory thwarted when Sadriddinov was awarded an escape as time ended. He took Sadriddinov down with less than 30 seconds left in the two-minute OT to keep his final high-school campaign going for at least another week.

“I wasn’t as nervous as I had been in the past,” he said. “I like to think I have a tomorrow.” Boyertown’s Gavin Sheridan scores back points against Haverford’s Cole McFarland for a 6-2 win in the 106-pound consolation final. (Nate Heckenberger – For MediaNews Group)

Babb opened the day with a 4-0 blanking of Quakertown’s three-time returning state qualifier, Domenic DeFalco. He followed it up with a 7-4 over South champ, Trent Kochersperger, before falling to Council Rock North’s two-time state medalist, Kyle Hauserman, 7-0, in the final.

“I worked my butt off in the practice room all week,” Babb said. “That semifinal loss last week gave me more motivation to kick some butt and try to get to the podium this year.

“I went in thinking I’m going to beat those guys,” he added. “My goal was to get to the finals. Hauserman is a stud, so my goal at the end of the day was to take second and I knew I could do it.” Jay Maldonado (120) was on the other end of a revenge match when Downingtown East’s Keanu Manuel took him down in sudden victory for his first win in four tries. Maldonado’s loss ends an eight-year streak of regional champs for Boyertown.

Kelly Kakos found his way to the finals, but settled for second after a 12-5 setback to Coatesville’s returning sixth-place state medalist, Nate Lucier.

“It means a lot to me,” said Kakos, who defeated Garnet Valley’s Griffin Hollingsworth in the semifinals. “On pa-wrestling(.com), they were predicting me to lose in the semis, so I wanted to prove a point that I was good enough and I was supposed to be here.”

PV’s Grant Euker came home fifth at 189. The Viking sophomore (13-3) pinned PW’s Jake Bainbridge at 2:06 after losing close decisions to DiTrolio in the semifinals (2-0) and Silber in their consi-semifinal.

Phoenixville’s Owen Koch ended his junior season with a sixth-place medal at 172. Making his first visit to a regional, Koch (12-5) opened the day with a 9-0 major decision on Garnet Valley’s Desmon Perry before losing his next three; the closest was a 3-2 decision by Lower Merion bracket champ Jack Lledo.

“It wasn’t bad,” Koch said of his day. “I wished it was better at the end. But it was pretty productive. I learned a lot.”

In the team standings, Spring-Ford had 95.5 points to outdistance Henderson (71), Quakertown (69) and Council Rock North (67). Boyertown, with three medalists, was fifth with 54.5 points. Perkiomen Valley’s Kelly Kakos returns Coatesville’s Nate Lucier to the mat in a 12-5 loss in the 132-pound final. (Nate Heckenberger – For MediaNews Group)