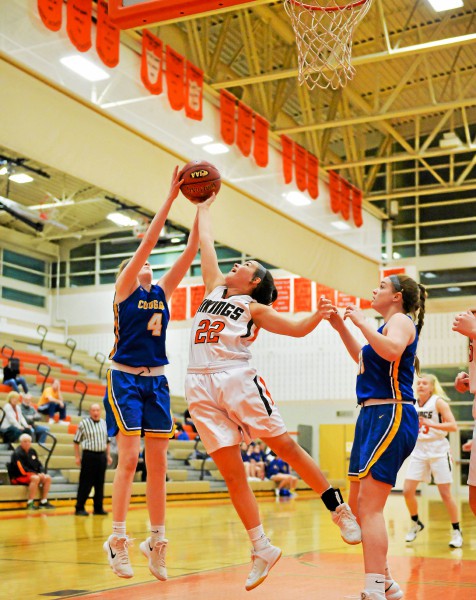 DOWNINGTOWN >> It was one of those rare outings where both sides of the coaching ledger came away feeling pretty good.

In the second of two regular season girls’ basketball meetings, Downingtown East topped archrival Downingtown West on Tuesday at Wagner Gymnasium, 57-37. East coach Tom Schurtz was pleased that his squad has now secured its third straight Ches-Mont National title. West mentor Mike Young wasn’t quite as happy, but he is seeing the Whippets make strides from also ran to potential title contenders as early as next season.

“There is a lot of balance in our division, but I think our experience in tough moments has been key,” Schurtz said. “We’ve played a lot of close games this season against a lot of quality opponents, and the thing that I am really proud of with this group is the attention to detail, our execution and defensive intensity – all those little things really add up.”

Just six days after squeaking past West by a single point, the Cougars used a similar defensive game plan to do it much more convincingly. And with the win, East improves to 10-1 to secure the division’s top seed heading into a one-day Ches-Mont Crossover Showcase on Monday that will replace the league tournament. More on that later.

The setback was the Whippets’ fourth in a row. Now 5-4, West still has three regular season games to play.

“It’s hard to say this, but I told my kids that I think we actually played better in this game than the first one against East,” Young said. “I know the final score doesn’t indicate that, but considering that we did just a walkthrough prior to the game to get ready for their press, and I thought we did better.

“Every kid out there did something better that they needed to improve on, and that’s what we ask for.”

As mentioned, the Cougars’ full-court pressure yielded 27 turnovers, which was six fewer than meeting number one on Feb. 17. The Whippets had just two giveaways in the first period, but that number exploded to 11 in the second, and it led directly to a 14-4 quarter and a 23-15 advantage for East at the half.

“It is physically and mentally draining to go against it. And it’s hard to rebound from a quarter like that when you are playing a very good team,” Young pointed out.

“Over time, it wears teams down,” senior point guard Mary McFillin said about the defensive pressure. “We have multiple presses and we’ve been working on them. Our opponents don’t know what to expect.”

And when East scored 10 of the first 15 points of the second half, the lead ballooned to 33-19. The Cougars’ Caroline Brennan then poured in nine of her game-high 21 points in the fourth, including 7-for-7 from the free throw line, to close it out.

“Today we made some shots, and last time we didn’t. And (West) missed a lot of good shots that they normally make,” Schurtz said.

McFillin scored all of her 11 points in the first half, and junior teammate Lauren Kent chipped in nine for East.

“Clinching (first place) is important to me and the seniors who have played the last three years,” McFillin said.

“I was hoping we’d get the season in because I think a lot of people assumed a step-back was coming for us, but I did not see that,” Schurtz acknowledged.

“This is a gritty, tough group of kids. They always want to go out there and battle, and in this league you better be ready every single night, and they really were all season.”

For tangible proof of the team’s progress, all you have to do it look back six days, where the Cougars needed a frantic finish to pull out a 47-46 decision over the Whippets.

“It just shows the kind of team we have,” McFillin said. “We spent the last few days preparing for (West) and we are ready to overcome and battle any team that comes our way.”

Up and coming sophomore forward Cameron McNamara paced the Whippets with 14 points, but she scored just three points in the second half. Nobody else had more than seven for West.

“Cam played about 10 varsity games as a freshman, so this is really her first true varsity season,” Young said. “She is going to be a really good player – actually she already is.”

Monday’s league-wide crossover will pit the corresponding seed from each division against each other. For instance, the top two seed will faceoff, and then all the way down to No. 7 versus No. 7.

Downingtown East will likely face Unionville from the Ches-Mont American. The Cougars are the two-time defending league champs, and are playing the kind of defense that can give just about any team major problems.

“Our girls are supremely fit and we are willing to play end-to-end for 32 minutes,” Schurtz said. “That’s hard to do. But these girls have really bought into it. We didn’t play that way last season but that is our identity now.”