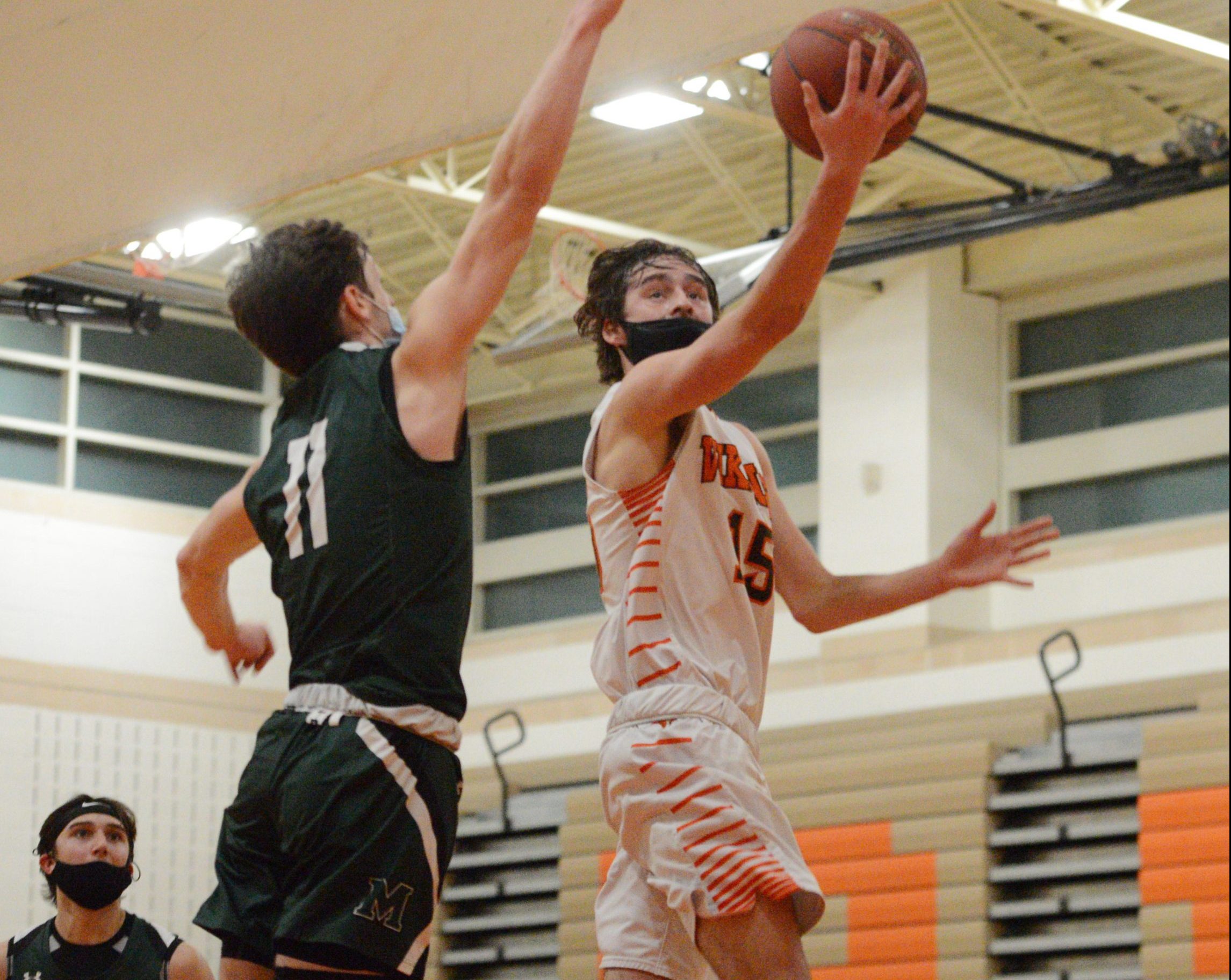 With just one senior on the roster, the Vikings won one game in the Pioneer Athletic Conference’s Liberty Division in 2019-20.

A year later, the now veteran Vikings are getting their revenge on the squads that picked on their inexperience last season.

PV completed a season sweep of Methacton with a 61-45 win on Tuesday night to complete its flip flop in the Liberty Division standings. The Vikings clinched the top spot of the division standings for just the second time in the past decade.

“Last year, we were really young,” Lapetina said. “We only had one senior. This year, with a big class returning, seven to eight seniors, I feel like we’ve been playing so long and this is our year to step up and show everyone how we’re playing. With a lot of work in the offseason, playing at the courts, jelling, I feel like we became a better team.”

.@ValleyBoysBBall senior Kameron Parks had all 15 of his points in the second half as Perk Valley won its sixth straight game Tuesday. pic.twitter.com/OZPizomSqy

After a lopsided loss to Pope John Paul II in its opener and a loss to Spring-Ford the following game where they trailed big at half, the Vikings have been a different team.

The victory against the Warriors (6-4, 3-2 PAC Liberty) gave the Vikings’ their sixth straight win and ninth win in their past 10 games — the lone loss a double overtime defeat at Upper Merion.

They’ve also gone a perfect 6-0 against Liberty opponents since the loss to Spring-Ford, including a dominant 76-49 win over the Rams.

“That was a wake-up call,” Lapetina said of the team’s original 0-2 start. “After those first two games of getting beat pretty bad, I feel like that changed the mindsets and got us going. We’ve been on a pretty good run since.” Perk Valley and Methacton entered Tuesday two games ahead of the rest of the Liberty Division in the loss column. The Vikings have just one division game remaining, finishing their Liberty schedule Friday against Boyertown.

PV jumped out to a 13-3 lead after the first quarter and held a 21-15 halftime lead before Methacton trimmed its deficit down to, 22-20, early in the third quarter.

With his team’s lead down to two, Parks reeled off five straight points. He had nine in the third quarter, including a scooping score at the end of the period that sent PV into the fourth with a 35-25 lead.

Dawson Debebe, who finished with nine points, knocked down a three and made a pair of free throws with 2:34 left in the fourth to extend the lead to 49-35. PV never let Methacton get closer than seven points in the fourth quarter, helped by a 15-of-18 showing from the foul line in the period.

“My teammates, they were cutting, slashing and getting open,” said Parks, who scored all 15 of his points in the second half. “They were helping me get open off cuts, screens and everything.”

Methacton fell behind 15-5 in the first quarter against PV in the teams’ Feb. 3 matchup — a 38-35 win for the Vikings. The Warriors were again down by double digits, 13-3, on Tuesday night after eight minutes.

Steven Penjuke hit three 3-point shots in the second half, and Jason Price and Cole Hargrove both finished with eight points as the Warriors unsuccessfully tried to chip away at the lead.

Playing from behind against a Vikings team that controls the ball on offense and has found its defensive groove this season is a daunting task as Methacton has found out twice now.

“We dug ourselves a hole just like the first time we played them and that forces you to play perfect basketball,” Methacton coach Pat Lockard said. “Unfortunately, it’s a very frustrating game to play when you dig yourself those holes and try to come out of it. If you make any mistake it becomes amplified.

“Credit to the other team. Perk Valley did a great job attacking those 50-50 balls, all those hustle plays, those putbacks. … Those things are deflating from a morale standpoint as well.” Parks looks at his squad’s defense as the main reason the Vikings were able to regroup from the opening two losses to the 2021 campaign..

PV gave up 76 points in its opening night loss to PJP and then 53 points, including 20 in the fourth quarter, in the loss to Spring-Ford the following game.

The Vikings have allowed teams over 50 points just twice in their 10 games since in a 56-53 double overtime loss to Upper Merion and a 54-53 over Pottstown in consecutive games.

“I really think we started taking pride on defense,” Parks said. “At the beginning of the year, we were letting (opponents) get by. But as soon as we started to get into our heads that people can’t get by us, we’ve been a different team.”

Tuesday’s 16-point loss was Methacton’s largest of the season by far. Its previous three losses were all decided by one-possession, including a 41-38 loss to currently undefeated PJP on Feb. 12.

The Warriors ended Tuesday No. 18 in the District 1-6A power rankings. Only 20 teams make the tournament this season.

Methacton, the reigning District 1 champs, has league games against Owen J. Roberts, Boyertown, Spring-Ford and Phoenixville remaining and may get a non-league contest in before the district seeding meeting March 3.

“The one silver lining we have is we don’t have time for me to get super upset about this with our guys,” Lockard said. “We have to move on and get ready for OJR. That’s kind of our mindset here and hopefully we come out tomorrow with a win.”

The Vikings moved up to No. 11 in the District 1 power rankings after Tuesday’s night’s win. The Top 12 teams get a bye into the second round.

PV finishes its PAC slate this week with a home game against Phoenixville on Wednesday and a road trip to Boyertown on Friday.

As they continue to roll, the Vikings are staying in the present. PV coach Mike Poysden said he hasn’t had a more focused group in practice during his tenure.

They’ve done a lot of growing up in a year to make their way to the top of division and ready for a district run.

“They believe in one another, they trust in the gameplan. And they know that it doesn’t matter if Ty’s up or Dom’s up or Kam’s up or Ethan (Kohler’)s up, when we’re up that’s good for us. And that’s fun to watch.”