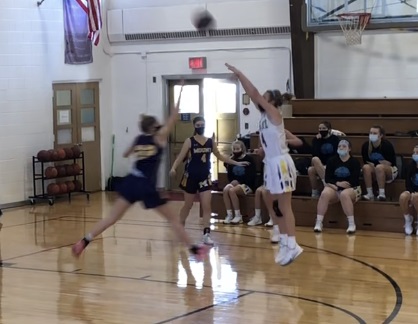 ABINGTON >> When her team needed a calming moment in a frantic fourth quarter, Sammie White came through not once but twice.

The St. Basil Academy junior hit two critical four-quarter shots to help stave off a furious comeback by visiting Mount Saint Joseph. With senior standout Denae Carter off the floor due to an injury, the Panthers used the sum of their parts to make sure their efforts didn’t go to waste.

St. Basil won its 10th straight game Sunday, topping the Magic 45-37 to stay one game off of first place in the AACA standings.

“We just had to stay confident and be strong with the ball,” St. Basil point guard Tori Nigro said. “We just had to work together; Denae is a huge part of our team and losing her made the rest of us step up.”

Carter, the reigning AACA MVP, all-state pick, program all-time leading scorer and Mississippi State recruit, was terrific through three quarters for St. Basil, recording 16 points, nine rebounds, four steals and a pair of blocks. With just a few seconds left in the third quarter, the forward came up with a steal but got tangled up with a pursuing defender at midcourt and had to be helped off with an apparent ankle injury.

The Panthers’ leading scorer did not return to the floor and coach Terry Mancini said she was going to have X-Rays taken. For St. Basil, the only option was to play through it.

“We’re pretty much an experienced team,” Mancini said. “Sammie’s played a lot of minutes for us as a junior, Tori was an all-league player at (Archbishop) Ryan and the other three are seniors. We did pretty well shooting foul shots at the end, we took care of the ball and did well defensively.”

St. Basil (10-1 AACA) has been short-handed all year with senior Shannon Remolde, a Kutztown recruit, going down with a knee injury just a few days before the season opener. The Panthers, winners of the last four AACA titles, adjusted with senior Hannah Hunter moving into the starting five and the duo of White and senior Riley Scannell taking on bigger roles.

White missed the postseason last year with a knee injury, but Mancini said the junior guard has really started to round back into form over the past few games. On Sunday, she drew the defensive assignment on Mount Saint Joseph’s (6-5 AACA) Grace Niekelski and didn’t give the Dartmouth recruit and all-state senior much room to work with.

“You have to stay physical with her, she’s bigger than me and strong,” White said. “I relied on my teammates if she got by me to be in help defense and we worked as a team.”

Carter and White combined for 11 of the Panthers’ 12 first quarter points as they went up 12-6 before Carter scored six more in the second quarter as the hosts took a 23-13 lead to the break. Niekelski got free to hit a late 3-pointer in the second quarter but she was held to just six points, well below her season average.

The Magic got a boost from Lauren Hoffman, who scored 10 points and added seven rebounds.

“Lauren only knows one thing and that’s to attack,” Mount coach Matt Feeney said. “It doesn’t matter who is in her way, she’s going to go out and play basketball. For a sophomore to have that kind of aggressiveness is fabulous.”

St. Basil led 32-23 going into the fourth quarter, but with Carter in the trainer’s room, the Magic had an opportunity to make their run. Switching to a press defense, Mount Saint Joseph got the Panthers sped up and went on an 11-3 run to pull within 37-34 on Georgia Pickett’s score with 3:56 left in the game.

That was as close as the visitors would get as a turnover and four missed shots over the next three minutes proved costly for the Mount. While the Magic didn’t have a chance to catch either St. Basil or first-place Gwynedd Mercy Academy in the AACA standings, it was a chance to get a marquee win.

“We had good looks, they didn’t go down but it’s also 37-34, we get a steal and turn it over immediately,” Feeney said. “I should have used a timeout there to settle them down. Give credit to (St. Basil), they got us running around a little bit defensively, found the open player and they converted.”

The Mount finishes its regular season Tuesday at Merion Mercy and a win would secure the No. 3 seed for Saturday’s AACA semifinals.

With their lead almost erased, Nigro found White for a short jumper that stuck the Panthers back to a 41-34 lead with 2:29 left. After a Magic miss and rebound, White converted again when Hunter found her open with the Mount defense scrambling to recover.

“I knew I had to be confident,” White, who finished with 10 points, said. “In situations like that, we’d usually look for Denae but I knew we needed somebody else to step up and I just stayed confident.”

Nigro, who came to the Panthers after two seasons playing for Archbishop Ryan, has been a nice addition to the team and finished with 11 points on Sunday. A former All-PCL pick, Nigro said the Panthers have really come together after dropping their season opener to Gwynedd Mercy Academy.

When Carter went out, the junior’s role as point guard became even more vital and she came through with four points, an assist and a steal in the final quarter.

“I just wanted to come in and make a positive impact any way I can,” Nigro said. “My position is point guard, so I just want to be a good, strong team-first player, handle the ball and help my team win games.”

The Panthers will visit GMA on Tuesday with a chance to split the regular-season series and force a tie atop the league table.

“We’ve stepped our defense lately,” White said. “We know offense will come, but defense is what wins games. We just have to keep working together and having that trust in each other is big.”