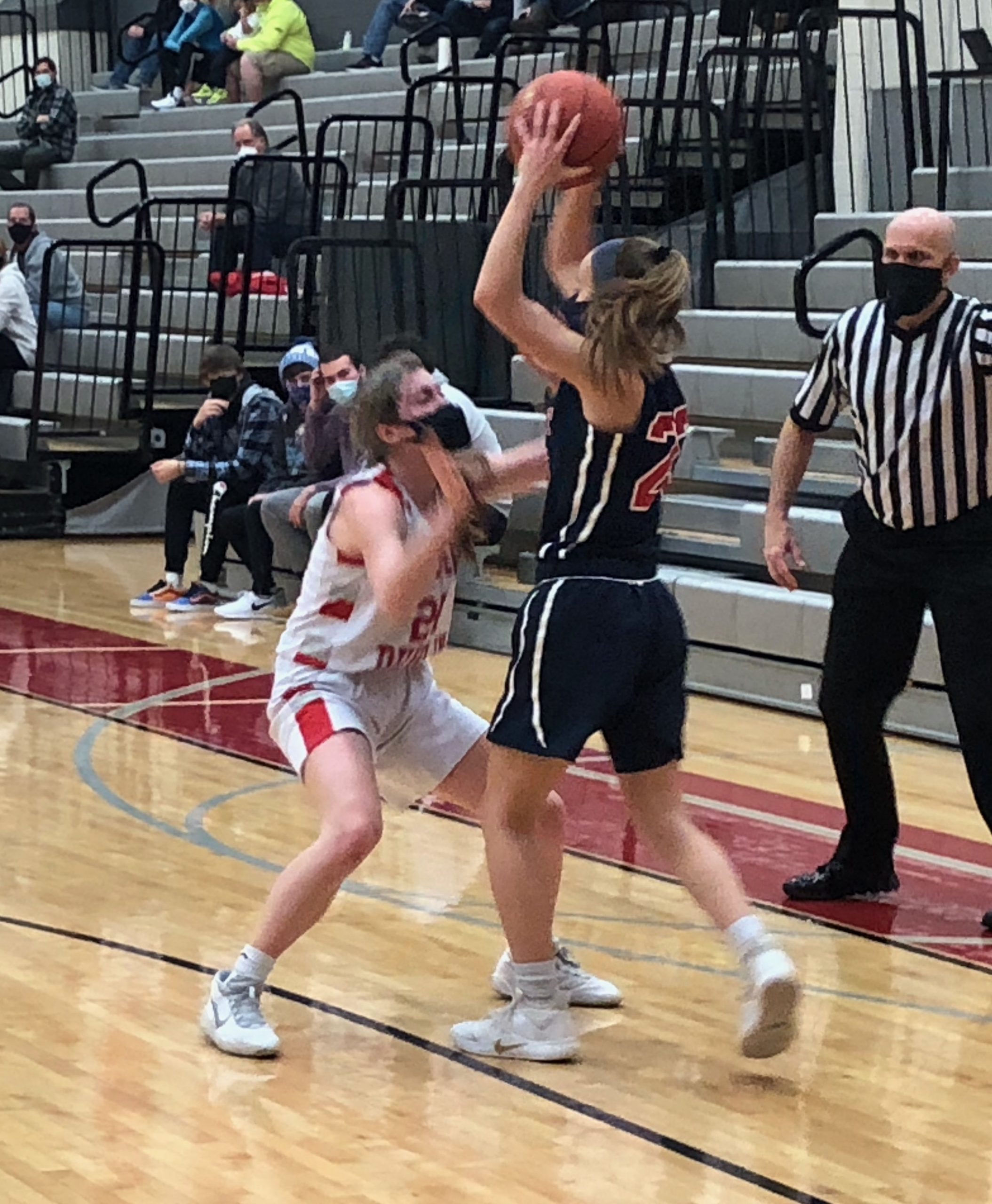 UPPER DUBLIN >> Sarah Eskew and Bliss Brenner know they’re going to have their hands full every time they step on a basketball court.

They are Upper Dublin’s dynamic defensive duo, tasked to guard the opposition’s top two players on a nightly basis. It’s a demanding job, but one they’re well-equipped to handle and one that their coach has plenty of faith in them to handle.

With Eskew and Brenner leading the way, Upper Dublin’s defense was in top form Saturday night as the Cardinals handed Central Bucks East a 38-25 loss, the Patriots’ first setback of the season.

“It’s not a ‘show up the night of the game and work hard,’ it’s all the preparation that goes into it,” UD coach Morgan Funsten said. “It’s all execution and effort on their end.”

Eskew, a senior guard and Brenner, a junior wing, had another tough draw Saturday as they squared up with the Patriots’ tandem of Mia Salvati and Emily Chmiel. Brenner gave up some size but not an ounce of effort in dueling with Chmiel, a terrific senior center committed to Chestnut Hill while Eskew chased Salvati all over the court trying to keep the East (11-1, 10-0 SOL Colonial) point guard from getting the ball inside.

GIRLS BASKETBALL: Upper Dublin's @sareskew nabs a rebound and outlets to @PolinJess who passes back to @amyngo22 for a 3-pointer Q3 against CB East pic.twitter.com/CNpYYxHijV

While the two aren’t known for their offense, they did combine for nine points with Eskew’s halftime buzzer-beater a huge momentum play for the Cardinals (13-2, 7-2 SOL Liberty). Their main job is to keep other people from scoring and by holding Chmiel and Salvati to 13 total points, they got it done.

“We go into every game watching a ton of film, learning our player’s tendencies and what they like to do,” Eskew said. “I’m always excited for it because it’s a really important part of our game.”

Brenner gave props to her teammates for providing plenty of help defense and Dayna Balasa was pretty busy sliding in to double when the center touched the ball and rushing back out to a shooter when she gave it up. Still, the Patriots found their centerpiece early as Chmiel scored eight points, her steal and layup giving East a 14-10 lead at the end of the first quarter.

Chmiel picked up her second foul early in the second, putting the senior on the bench until the second half, but the Cardinals were ready when she came back. Brenner and her help defenders limited Chmiel to just two points over the final three quarters.

“I was just trying to stay focused on getting in front of her early,” Brenner said. “My teammates had my back, I just worked around her and they were just talking me through the possession every time and giving that help in from the side.”

Eskew was like glue on Salvati, chasing the East point guard so much Funsten had to joke with her about the amount of ground she covered in the game. The outcome was worth the effort as Eskew kept her mark to just three points.

“The ball’s always in her hands,” Eskew said. “I just wanted to pressure the ball and keep the ball out of (Chmiel’s) hands. She’s also a pretty good shooter, so I didn’t want to leave her any space.

The secret to Eskew and Brenner’s success as defenders lies away from a basketball court. Both are multi-sport athletes with their other endeavors coming in disciplines that require high energy, high stamina and a willingness to push through.

Eskew is an accomplished distance runner and has signed to run cross country at Rider while Brenner is a soccer player, where she features mainly as a defender.

“I’ve always loved multi-sport athletes, you can’t teach kids the competitiveness and the drive, so playing multiple sports, it keeps you ‘on’ all year round,” Funsten said. “To be a good defender, you have to be able to compete and they’re two of the best competitors we had.”

The duo rarely subs out, which isn’t uncommon but with players having to wear face masks, it is one more thing on their plate. Brenner said at this point, they’re used to it and it’s not something they try to think about or let distract them.

“Coming from soccer and cross country, we’re used to the high energy and the amount of running,” Eskew said. “It definitely helps us.”

Upper Dublin held East to just one point in the second quarter and only two points in the third quarter but their offense was slow to get going as well. A timely 3-pointer by freshman Amy Ngo, who had a game-high 17 points, tied the score 14-14 before senior Jess Polin gave UD the lead for good when she hit a three with 26.3 left in the half.

Ngo and Balasa scored all but two of UD’s 19 second half points while Polin played the role of conductor with six assists.

“We played really well as a team and worked together,” Brenner said.

The Cardinals struggled in their two losses to Plymouth Whitemarsh, but were eager to face the Patriots as they enter a closing stretch of games against playoff contenders. UD, which entered No. 3 in the District 1-6A rankings, is hoping a strong finish will secure a top-four spot for the one-and-done District 1 tournament.

Funsten said the losses have tasked the coaches and players to evaluate themselves and the upcoming slate, which includes games with Spring-Ford and Methacton, offers more of those opportunities.

“We treated it like a playoff game and that’s just how we’re looking at games now,” Eskew said. “We’re going to come to play.”

Making Eskew and Brenner’s efforts Saturday more impressive was what they did earlier in the day. The Cardinals had a two-hour practice Saturday morning that Funsten said probably had more running than either would have liked but also helped prepare for their assignments.

“It was one of the best practices I’ve ever been a part of because these girls are locked in right now,” Funsten said. “With what they’re going through in every other part of their life not being normal, it’s been rewarding having this time with them.

“With Bliss and Sarah, they could probably go another 32 minutes. They’d probably have to limp out of here, but they’ve just been awesome.”