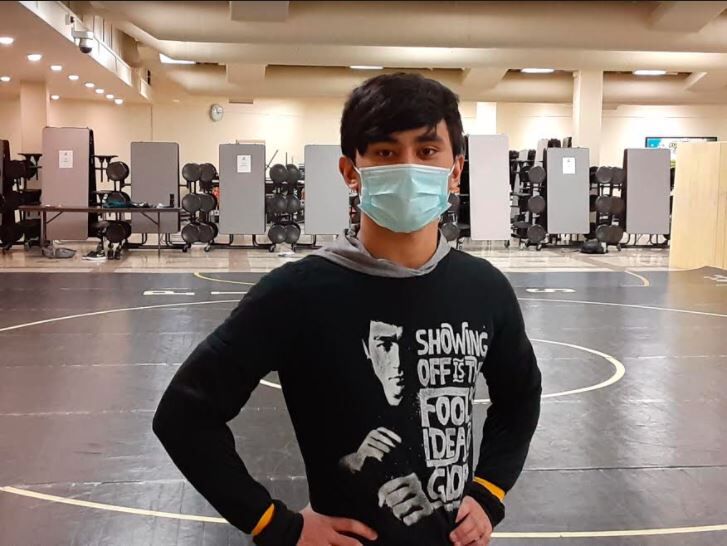 Interboro's Nate Shippey poses before practice Wednesday. The junior wrestler is the No. 2 seed at 126 pounds in the District 1 South tournament.

PROSPECT PARK — Interboro’s Nate Shippey was on a roll heading into the 2020 wrestling postseason.

The then-sophomore 113-pounder had a 23-8 record, ranked fifth in District 1 and had won 11 of his last 13 matches of the regular season, five by fall. His only losses in that stretch were to Boyertown’s Jay Maldonado and Malvern Prep’s Spencer Barnhart. Maldonaldo would finish eighth at the PIAA championships after winning the District 1 North and Southeast Regional titles. Barnhart placed second at the Pennsylvania Independent Schools Wrestling Tournament.

“We were under the impression that he was going to be a state qualifier,” Interboro coach Dan Tobin said this week. “He was going to beat half those kids in the regional.”

Shippey never got the chance. A few days before the district tournament, Shippey woke up with a 104-degree fever.

“I thought I was going to die,” Shippey said. Interboro’s Nate Shippey loosens up before practice Wednesday. He is the No. 2 seed at 126 pounds in the District 1 South tournament.

He was diagnosed with the flu, but in hindsight, he and Tobin think Shippey may have been an early victim of COVID-19, which many experts have come to believe may have been circulating in the United States weeks before official detection.

“It might have been, we just don’t know,” Tobin said. “Three weeks later all that started coming out.”

Flu or COVID, Shippey’s season was over. The illness forced him to pull out of the tournament.

“It was disappointing, but I’m using that as motivation this year,” Shippey said. “I believe I would have gone to states last year so I want to go out and prove it and make states this year.”

Shippey begins that quest at redemption when he takes part in the south portion of the District 1 championships Saturday at Sun Valley. The junior is the No. 2 seed at 126 pounds behind Dominic Findora of Downingtown West, a two-time states qualifier.

Like last year, Shippey is on a roll. He has an 8-0 record. Six of his wins have been by fall, with one by major decision. Shippey started the season with four straight pins, including three in the Backyard Brawl at Northern Lebanon High.

“That was good to wrestle kids from outside the area, guys we might see at super regionals,” Shippey said. “So that was a good gauge to see how we fared.”

In his final match of the regular season, Shippey pinned A.J. Slayton of Faith Christian Academy. Slayton won the District 1 Class 2A title at 113 pounds last season and finished fourth at the Southeast Regional to qualify for the PIAA championships.

Getting to the state tournament could be a little more difficult this year given the postseason changes caused by the coronavirus pandemic. In years past, the District 1 Class 3A tournament was divided into four sections. This year, it’s just North and South sections with a limit of eight wrestlers per weight class.

On the plus side, if you get to Hershey, you’re an automatic medalist.

“Anything can happen,” Shippey said. “There are four state qualifiers at 120. Someone’s not going to make it. I can say the same thing for me at 126. I believe I can do well.”

Tobin thinks so, too.

Determination is one of Shippey’s traits. He stuck with wrestling even though he did not like the sport at first and did not have a lot of success.

“I had those moments of, ‘Do I really want to do this?’ It’s kind of tough,” Shippey said. “I was very bad when I was young. I used to get destroyed but then I got a little better and started winning more and I started to like it a little more. My freshman year I started off negatively with a 2-3 record but I didn’t let myself get down. I used that as motivation to get better.”

Shippey went on to finish 28-11 as a freshman. He finished second at the District 1 South tournament and advanced to the Southeast Regional.

“I realized that losing isn’t all that bad. I used it as a learning experience and got better each year and now I’m here.”