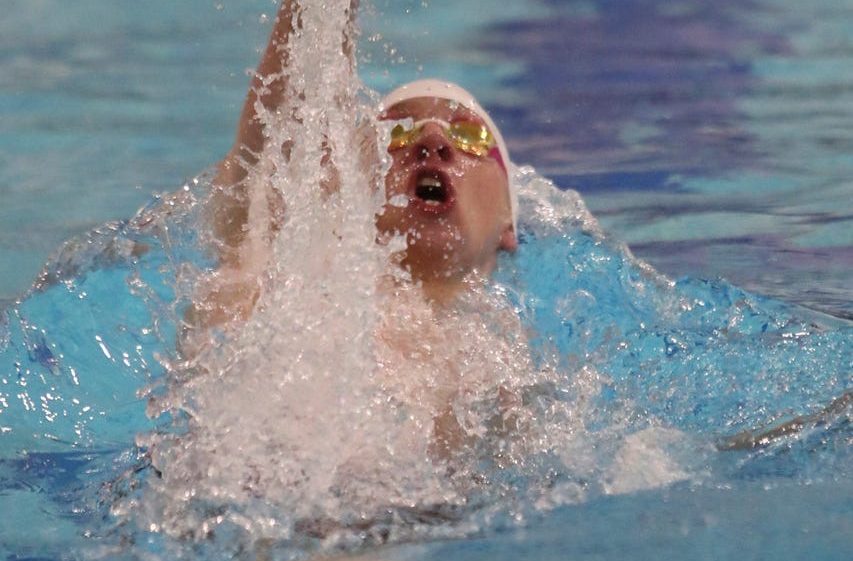 KENNETT SQUARE >> It’s difficult to believe, but there was a time when Tommy Janton wasn’t really interested in swimming.

This happened, of course, long before the 16-year-old Kennett native blossomed into one of the nation’s best in the backstroke – well before earning his way into the upcoming U.S. Olympic Trials which will determine who moves on the Tokyo Olympics this summer.

“To be honest, the first day I got into the pool at the Kennett YMCA, I was not too thrilled,” he acknowledged. “I really didn’t want to do it but my dad wanted me to give it a try.

It was, admittedly, a brief moment in time nearly a decade ago. Nowadays, swimming is all-encompassing in Janton’s life, along with his school work. He is currently a junior at Salesianum School in Wilmington, is a proud lifelong product of the YMCA organization, and will eventually head to Notre Dame on an athletic scholarship in 2022.

Janton is following in the footsteps of his dad and coach, Tom, who swam at Salesianum, continued at the University of Tampa and has been a swim coach for 35 years. As a youngster, Janton played a lot of sports, from basketball to soccer to baseball. At age seven, his dad prompted him into giving swimming a try, but it certainly wasn’t a hard-sell.

“I tried to stay at arms-length with Tommy so that he found the love of swimming himself, not because of me,” Tom Janton said.

It didn’t take long. He spent four productive years competing at the Kennett YMCA. By age 12, Janton was head and shoulders above all of his peers, and it was at this point it was decided that he should begin focusing solely on the pool.

“We also knew that he needed more elite training and so we switched Y’s,” said his dad.

As a result, when he was 13, Janton moved over to the Western Family YMCA in Newark.

“The Kennett YMCA did a great job helping to get me started,” Janton said.

“When he went to Western, I knew I could step in in a full coaching capacity and that’s what we did,” his dad added.

Janton attended Greenwood Elementary and Kennett Middle School, but when it came time to pick a high school, Salesianum was always a prime option.

“The Sallies have always been a powerhouse in swimming,” he said. “So when I visited in eighth grade I saw how successful they were, I knew it was something I wanted to be a part of.”

To the surprise of absolutely no one, Janton made an immediate impact. In the state championship meet a year ago as a sophomore, he captured individual titles in the 100 butterfly and 100 backstroke, and was a member of two relay teams that also grabbed state crowns. He earned high school All-American status for his performance in the backstroke.

“Writing things out – like splits and things like that – helps me visualize,” Janton explained. “Just seeing it on paper. The night before a meet my Dad and I we will go over things and talk about splits. We will have two or three things I need to focus on, usually small thing so that I am not overwhelmed.

“To break it apart and think of it in smaller chunks to I can take it all in over time rather than all at once.”

It’s just a part of Janton’s cerebral approach to swimming. He is quick in the water, has the idea build and plenty of athleticism. But, according to his dad, Janton’s mental approach is the overarching difference-maker.

“The goal-oriented process is probably one of Tommy’s best assets,” he pointed out. “His training ethic is also very good, but it’s the mental portion that really sets him aside.

“His ability to mentally get himself ready for his races, and what he needs to accomplish, are dynamically special about Tommy.”

In the last year, Janton’s taken it all to a new level despite the coronavirus pandemic. He spends 16 hours a week training in the pool. Last March while in quarantine, he decided to get ahead of the curve and start looking at colleges.

“It was well before June 15th, which was the first day coaches can start recruiting (athletes in) my class,” he said.

And thanks to an unusual devotion to time management strategies, academics has only widened Janton’s options. His last semester grades were straight A’s, by the way.

“To be a swimmer at the collegiate level you have to be devoted and disciplined. At 16, Tommy has begun to produce those qualities, particularly with time management.”

Not long after verbally committing to the Fighting Irish, Janton traveled along with his YMCA team to Richmond for the U.S. Open Swimming Championships last November. He proceeded to take the silver medal in the 200 backstroke and a bronze in the 100 backstroke, and both of those times were good enough to qualify for the Olympic Trials in Omaha on June 13-20.

“It was the biggest meet I’ve ever been to,” Janton said. “I was not going against kids I normally compete against. It was swimmers age 15-24, so it was all business.

“It really was a different experience to see the maturity level and how they composed themselves as compared to a regional meet with kids my age.”

In the 100, Janton’s time of 56.59 was faster than everybody except Maryland high school star Daniel Diehl and the University of Virginia’s Max Edwards. And in the 200, he finished less than a second behind the winner, James Ewing, a North Carolina State recruit. Janton’s time was 2:03.93.

“After I made the cut in the 200, my coaches and I looked over the times at the Rio (de Janeiro) Olympics in 2016, and my time is right outside the semifinals at 19th place,” Janton said. “So my goal (at the trials) is to be under 2 minutes for the 200 backstroke in order to get a top-16 spot. That would be incredible.”

Janton also notched an 11th place finish in the 100 butterfly, which was impressive but not enough to qualify. He is considered a backstroke specialist, but is working hard to become a well-rounded threat in multiple events.

“The backstroke is my preferred stroke but I want to try to get as many pieces of the puzzle as I can to be more well-rounded,” he said.

And at the age of 16, he has plenty of time to grow and improve. If Janton isn’t able to qualify for the Tokyo Olympics, he would still conceivably have shots down the road at the 2024 Games in Paris as well as the 2028 Games in Los Angeles, when he would still be in mid mind-20s.

“This is something I’ve always looked to achieve,” Janton said when asked about the Olympics. “I didn’t think (2021) was possible at first considering how many steps it takes, but as much work as I’ve put in I think that it’s been worth it to get where I am today.

“My dad’s always had my best interest in mind and I appreciate all that he’s done for me.”

The mindset heading into Omaha is to learn from the experience and take it into national high school competitions from now through 2022, and then move on to collegiate and Olympic challenges that lie beyond.

“As Tommy begins to adventure into next-level swimming, everything is about experience,” Tom Janton pointed out. “We will set our sights on swimming as fast as we can, but it’s also about experience for the next Olympics when he is fully invested in collegiate training.”