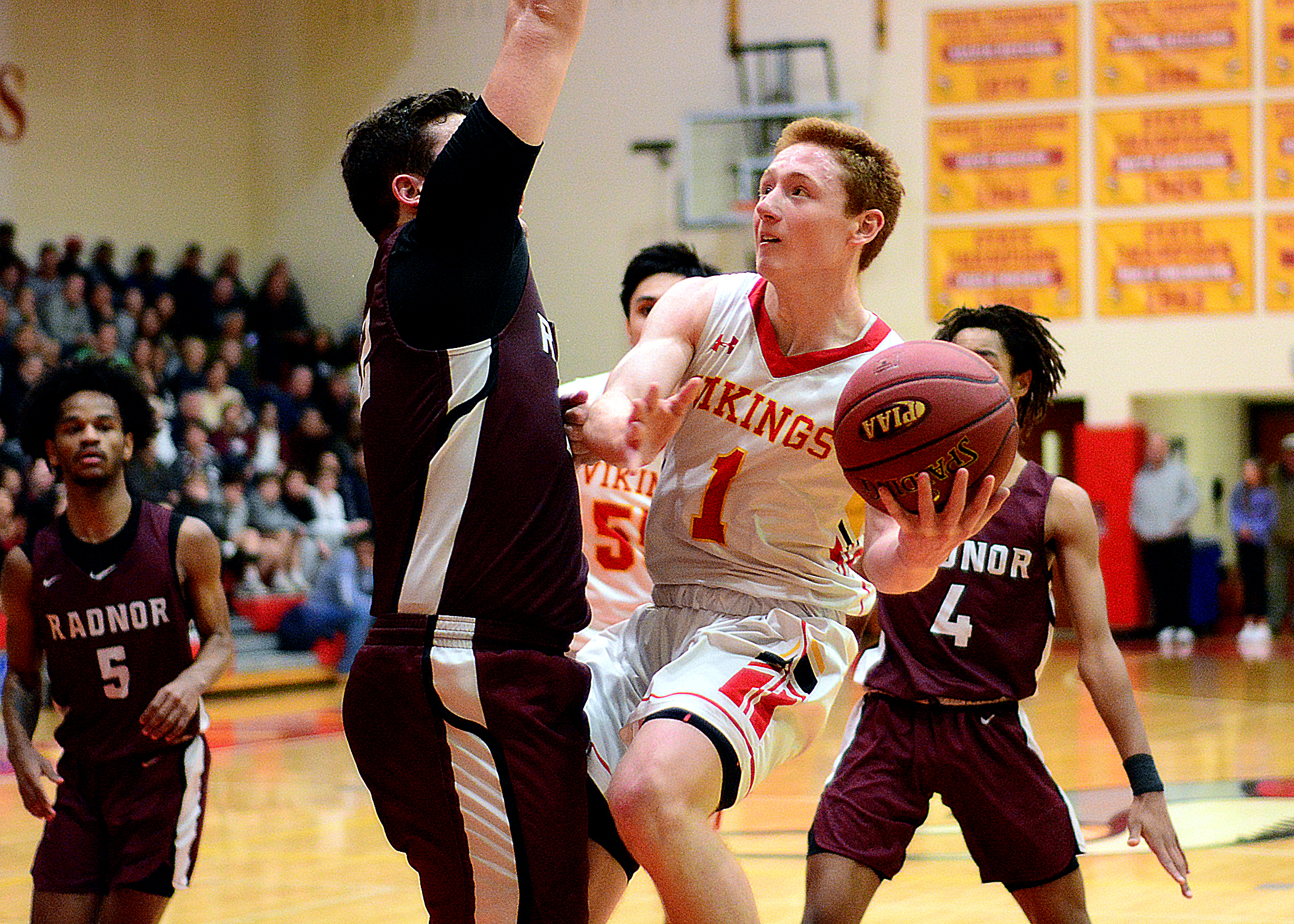 WEST GOSHEN >> Energy and resilience are often enough to overcome a challenge. And for West Chester East’s boys basketball team, that told the story of Saturday’s win over archrival Rustin.

The Vikings had enough spark, and enough fortitude to fight off a challenge from the Golden Knights, in a 56-51 win at Jack Byrne Gymnasium.

Mike Dedda led the Vikings with 15 points and sophomore Jack Kushner added 14 points and six rebounds in the winning effort.

“We just want to be known as the scrappiest, hardest working team around,” Kushner said. “We lost a lot of points from last year and we have to play defense and with energy to win games. I thought we out-hustled them today, especially in the first half. I thought we played very well as a team and I was happy with my defense and I also opened the floor up for my teammates and we got everyone involved today.”

The Vikings were shooting very well in the first half, but it was the Golden Knights who came out hot in the second half, as Rustin cut the East lead to 30-25 by scoring the first eight points of the third quarter. A couple of 3-pointers, one by Pete Reinheimer and one by Mike Miller, were the big shots in the Golden Knights’ rally.

But, as good teams do, the Vikings recovered before their lead fully evaporated, going on a decisive 9-0 run to open things up again at 39-27. Stanley Porter started the Vikings’ run by scoring inside off a feed by Dedda. Kushner then took a Golden Knights miss and drove the floor for a layup and a 34-25 lead.

After Rustin star Griffin Barrouk, who led all scorers with 20 points, missed on a runner, Kushner drove the lane and scored for a 36-25 West Chester East lead. The Golden Knights then turned the ball over and Kieran Hefferan drained a corner three and the Vikings were back in charge at 39-25 late in the third period.

“We played really good defense today,” Dedda said. “My job was to cover No. 23 (Barrouk), and I like to play good, tough defense every night. I felt like we had control of the game from the start and when they cut into the lead, we responded and then did not take our foot off the pedal and got the win.”

West Chester Rustin found its footing in the second half and the Golden Knights did not quit, even being down 39-27 at the end of three. Rustin used the shooting of Barrouk and the inside game of Barksdale to cut the Vikings’ lead to 50-44 with 43 seconds left. But the Knights missed three long 3-point attempts and had to foul the Vikings in desperation time. Kushner hit two free throws and Jose Ramos went a perfect four for four from the charity stripe to seal a big win over their crosstown rivals.

“They came out more ready than us,” said Rustin coach Keith Cochran. “They are the defending league champs and they have some swag and we were not as prepared as I thought and that is on me. We will get better and we will be back.”