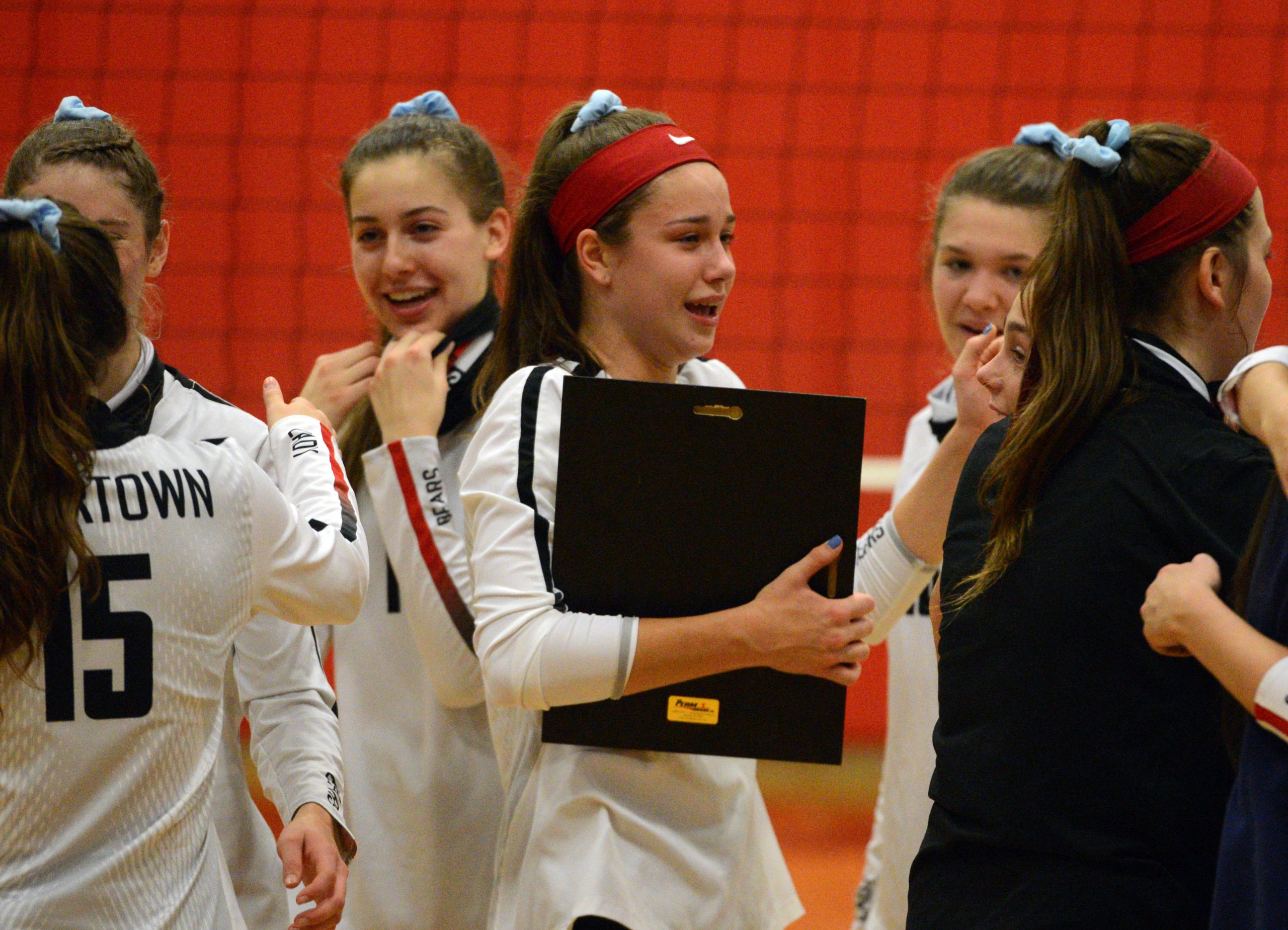 His daughter Emma, then an 8th grader, recalls the excitement her father often came home with back then.

“I do remember him coming a few times and talking about girls who he found (that were interested in volleyball),” Emma Ludwig said. “Like, ‘Emma this is going to be so good. This is going to be so much fun.’ But I don’t think we ever expected this to be what it is now so quickly in the four years that we had.”

Ludwig joined her father and the Bears a year later in 2017, their inaugural varsity season after operating as a club the season prior.

Each season she’s seen the program grow and her game excel along with it from five league wins as a freshman to a division title as a sophomore, and trip to the league championship as a junior.

Her senior season in 2020 was the culmination of that growth as Ludwig — a two-time all-state player and three time first team all-area selection — helped lead the Bears to their first Pioneer Athletic Conference championship and earned the 2020 Mercury Girls Volleyball Player of the Year Award.

“Definitely having the season come to an end a couple weeks ago was really hard,” Ludwig said. “The past four years, my life has revolved around the game through my school team. My school team was my family for the past four years. Just being able to watch us grow as a group altogether from our first year to now was just amazing.” Ludwig’s introduction to volleyball came in the Ludwig family’s backyard. When her father fired up the grill, Ludwig was out there with him ready to play pepper between flips of whatever was cooking.

She started playing for Club Integrity in Pottstown when she was 12 — later joining East Coast Power — and fell in love with the game, eventually deciding to focus on the sport over basketball and lacrosse.

“It was always something that was easy for me to do and I just enjoyed it so much that when it wasn’t (easy) I didn’t mind working hard to get better,” Ludwig said.

Ludwig joined the Bears in 2017 with classmates and friends Alexa Mack, Kait Ott and Julia Black. The group went 5-8 in the PAC and 6-10 overall, winning just two Liberty Division matches.

The 2018 campaign was a season of firsts for Boyertown as the Bears won their first Liberty Division title and made their first Pioneer Athletic Conference Final Four and District 1 playoff appearances.

Ludwig was there for all of it, starting every match during her four seasons at Boyertown and tallying 1,527 career assists, 913 kills and 847 digs along the way.

“She just said, ‘Whatever you need me to do,’” Mike Ludwig said. “As a coach, that’s the kind of kid you want because early on especially, we had one or two other girls, but they just had a lot more volleyball experience than the rest of the program. She could set, she could hit, play defense if we needed her to.

“To have a kid that is willing to sacrifice kind of her own personal skills for whatever the team needs, that really helps your program grow. As that happens, other kids in the program see that and take that lead.”

The steps each season reached their pinnacle Oct. 20 when a 3-0 sweep of Pottsgrove clinched the program’s first PAC title, adding some hardware to commemorate the work Ludwig and her teammates put in to build the program from its early stages.

Ludwig teared up as she clutched the PAC championship plaque after the victory.

“It’s something that I’ve been dreaming about and as a team, we’ve been dreaming about for the past four years,” Ludwig said. “Even though it wasn’t in the perfect circumstances, it doesn’t take away from what we did. It’s still a PAC title, we’re still going to have a banner hanging up in our school, which is totally crazy for us to be able to hang that first banner for Boyertown volleyball.” Though the Bears came into 2020 as the league favorites with perennial power Pope John Paul II sidelined early due to COVID-19 precautions, there was a lot of certainty about this somewhat inexperienced group would fare without two of the program’s stalwarts Emily Wolfe and Julia Smith.

Like she has throughout her career, Ludwig found a way to elevate her teammates.

“My goal was to bring my knowledge I got from my club team and bring it to them on the court and showing them the right things to do,” Ludwig said. “Just being able to translate my knowledge to them in a way that was still in a teammate form was my goal.”

Ludwig and the rest of the Bears’ senior group will be sorely missed next season, when she will begin her college career at Millersville University, where she recently made her commitment.

She and her teammates won’t soon be forgotten, however.

Along with a championship banner, the group’s high school careers will be defined by the building blocks they left behind for the teams that follow.

“The biggest thing that they did is they helped create the culture that you have to have to be successful,” Mike Ludwig said. “I’m a firm believer for a program to be successful, it’s all about the culture that they create because you’re going to have some years with more talent than others, but if you create that right family culture it really sets the program up for success. Our four seniors, all of them did that.

“When I look at the legacy, the four of them left, that’s what it is: they created a championship culture within our program. That’s something that will carry on long after they’re gone.”