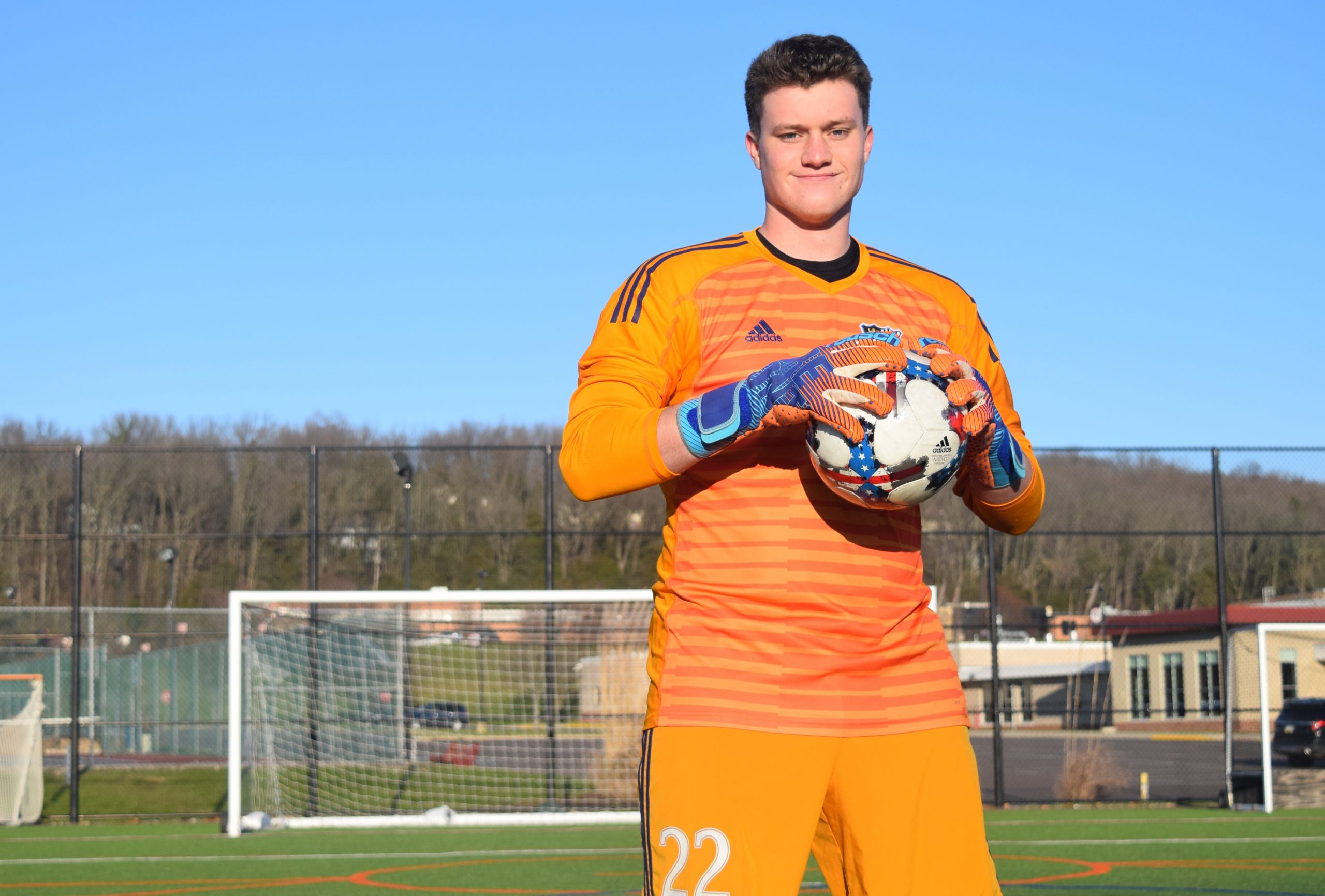 Team talks for the Pottsgrove boys soccer team this fall looked and sounded like few others.

Unlike nearly every team in the history of organized sports, the head coach or an assistant coach wasn’t always the one doing most of the talking.

“I almost don’t have to do anything. I can step back and just let him go,” said Pottsgrove head coach Jay Witkowski. “It was unreal.

“This year especially, he’s come into his own and matured and become just a natural leader. He’s positive, always making sure nobody falls off but is positive with it, never creating a problem in the locker room but pushing everybody as much as he can.”

The Falcons’ three-year starting goalie reached a new level in his final high school season and couldn’t have picked a better time.

With Kaiser’s ability between the sticks to command his penalty area, organize his team and communicate on and off the field like few before him, Pottsgrove was positioned to withstand the challenges of the concentrated pandemic-altered Pioneer Athletic Conference and postseason at just the right time. Despite traditionally being the best of the small school division, Pottsgrove more than hung with the big boys in the modified seven-team PAC, finishing tied for second place at 7-4-1 (8-5-1 overall) before making a run to the District 1 Class 3A championship made possible with a 1-0 overtime win over nemesis Holy Ghost Prep in the semifinals.

It was done with a disciplined defensive approach that saw Pottsgrove concede a league-low 11 goals along with seven shutouts, achieved in large part by having the best goalkeeper in the area on their side. In addition to being named to the Pa. Soccer Coaches Association’s All-State team, Kaiser is the Mercury All-Area Boys Soccer Player of the Year.

Kaiser is the first goalkeeper in more than 15 years to receive the honor and only the second Pottsgrove player in that span (Jonny Price, 2008).

He’s also a two-sport All-Area first team selection after being named first team punter in the football list after serving as kicker on the Falcons’ team for his final three high school seasons.

Kaiser performed to his highest level in a season where he felt he didn’t have to hold anything back, a difference from feeling the need to rein in his instincts as an underclassmen.

“Inside sports and even out of it that’s just kind of the person I am, a leader and wanting to bring people together,” Kaiser said. “What made it so important this year was my freshman through junior years it was hard for me to be put in that position. I wasn’t used to being the underclassmen, the guy not everyone is looking for to be the leader. You kind of have to fall out of that role when you’re not meant to be there.

“To step back into (the leader’s role) was really important for me. I felt like if anybody was going to step into the role, I had to do it. I wanted to win with this team and I wanted everyone together. It wasn’t that I needed to be the guy, I just wanted everyone to be together because I knew if we didn’t have that we would start to fall apart and get on each other about things we didn’t need to.”

Kaiser was fortunate to have a cohesive, large group of senior classmates, including fellow All-Area selections Cooper Fiore, Shane Gleason, Mike Troutman and Justin Collings, who trusted Kaiser’s ability and all dreamed of aspiring big things in their final high school seasons.

“What I liked most about our class was how we were inclusive and brought the younger guys in; we weren’t pushing people out or causing problems. We just wanted to play together,” Kaiser said. “That wasn’t always there in my four years, so I was so grateful to have it this year because I think it made all the difference. Even if we didn’t have the most skill or technical ability as some of the bigger schools or even past years of Pottsgrove, we were playing for each other.” Kaiser was already one of the top goalies in the PAC — second-team All-Area in 2019 — but felt like he took a step forward entering this fall through his time with Pottsgrove assistant Jeff Erb and West-Mont United coach Tom Gosselin. Kaiser’s ‘02 West-Mont team, which features three other All-Area first team picks, is ranked fourth in Pa. and in the top 10 in the region.

“The breakthrough from my junior to senior year came from playing at a high level at club,” Kaiser said. “Goose really helped with some technical ability things that transferred into high school season. I think that made me stand out that little bit more and could put me at the highest level.”

Kaiser showed all the marks of a top goalkeeper this fall according to Witkowski.

“With us playing all those big schools and us having a small bench, it was a perfect time for him to step up. We needed him to do everything he did and to step in and carry us and that’s what he did.”

Pottsgrove gained confidence from its season-opening 2-1 overtime loss to reigning PAC champion Boyertown and got another jolt of belief in a 2-1 win at Perkiomen Valley that let them know they weren’t just a small-school team this fall.

“The Boyertown and PV games earlier on were good indications that we weren’t just going to fight for these spots, we’re going to be among the top of the league,” Kaiser said.

In the rematch at Boyertown on Oct. 13, Kaiser had his best individual game of the season where he stopped a penalty kick in a seven-save masterpiece to blank the eventual league champion Bears 2-0.

“I felt like that was a standout game, a scenario where you can change a game from this position,” Kaiser said. “That one stays in the back of my mind of being proud of the hard work I put in, and I think it showed in that game.”

Excellent PK save Luke Kaiser on Nick Willson to keep it 0-0, 17 to half pic.twitter.com/G49GbuFXLZ

Pottsgrove couldn’t quite keep pace at the top down the stretch but did play spoiler for Spring-Ford when the Falcons blanked the Rams 2-0 in their regular season finale to deny Spring-Ford first place.

The modified postseason opened with a bang against perennial Class 3A nemesis Holy Ghost Prep, two teams that have put their seasons on the line against one another many times over the past decade-plus.

Kaiser has been at all of them. Following brothers Danny (2014 graduate) and Will (2017), the end of Luke’s high school career marks the end of an 11-year run of Kaisers with Pottsgrove boys soccer. They’ll be able to say they went out with a win over Holy Ghost Prep when Pottsgrove reversed a crushing 1-0 overtime loss in 2019 with their own 1-0 OT win to advance to the District 1 final for the first time since 2015 (in Class 2A, the final year of the three-class format).

“Holy Ghost and Pottsgrove go way back,” Kaiser said. “There’s been a lot of games that I’ve watched of older siblings playing against them that didn’t go in our favor. That was a game I was going into thinking this is a game I’m going to remember. I saw the win coming and I felt confident. Beating them in basically the same way they best us the year prior, that was big.”

The season was cut short of a return to states with a 3-2 overtime loss to Upper Moreland in the district final.

Kaiser didn’t see it as cut short though.

“One of the things I would always say before the game is ‘Go out like this could be our last’ and it almost became a running joke,” he said. “But I was always so serious about it because I was nervous it could be.”

He made a point to express gratitude to the Pottsgrove School Board for allowing fall sports, Athletic Director Steve Anspach, trainer Jack Thomas, coaches Witkowski, Erb and Kevin Grimm, and all his teammates.

“They made my whole high school soccer career special, but especially this year,” Kaiser said. “It was something I won’t forget.”