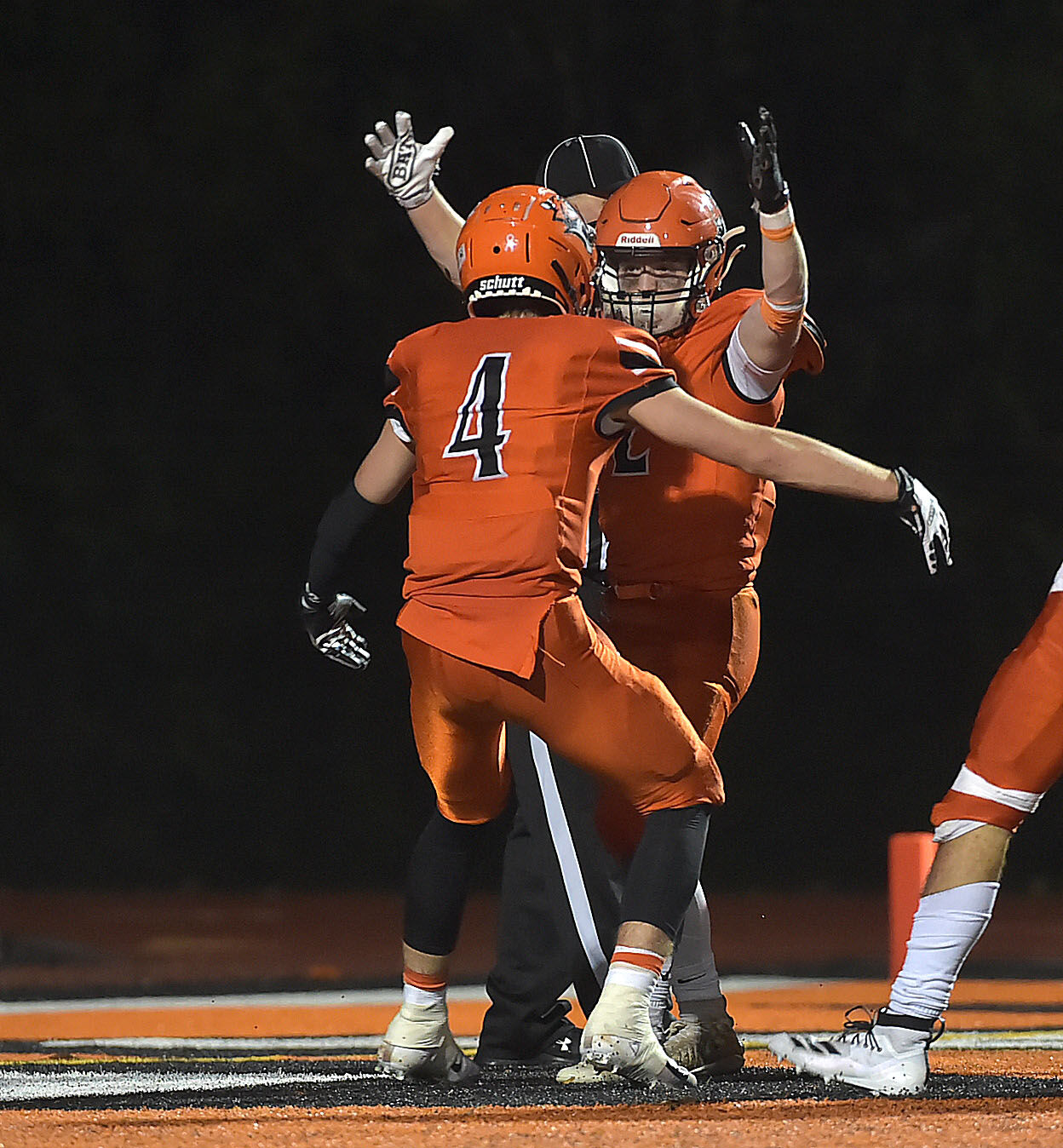 Marple Newtown's Eric McKee (4) congratulates running back Charlie Box after Box scored what would be a game-winning touchdown against Radnor in a 21-14 Tigers victory earlier this month.

NEWTOWN SQUARE — John Ebert doesn’t get to go into Marple Newtown High School too much these days. With instruction being done in a hybrid format, and members of the football team encouraged to take classes online instead of in-person to lessen the risk coronavirus exposure, Ebert’s visits have been few.

When he is in school and happens to cut through the gym where the school’s championship banners hang with pride, however, the one that catches Ebert’s eye is for football. Makes sense since Ebert is a senior two-way lineman and one of six captains for the Tigers.

When he sees the banner, however, the same thought pops into Ebert’s head.

The players are well away of that history and are determined to add to it.

“We actually talked about it (last) Saturday,” said two-way senior lineman and co-captain Ryan Lain. “The 2016 team and the 1977 team, those guys are all legends. If you want to reach legendary status, go 6-0 and win the championship Wednesday. That’s what we’re going after. We want to be those guys.”

All the Tigers have to do is go on the road Wednesday night and beat a Garnet Valley squad that has been a league power since joining the circuit in 2008. The Jaguars (5-0) have won the last two league championships outright, six overall (five outright) and have gone 100-12 in league competition (102-13 against league foes in District 1 playoff games).

Garnet Valley also brings a 24-game league winning streak into the contest. Its last league loss was a 10-7 setback to Springfield on Oct. 20, 2017.

With running back Shane Reynolds and quarterback Kevin McGarrey leading the way, the Jaguars are averaging 47.8 points a game while allowing just 5.2 points per contest. The Jaguars are 8-0 against the Tigers since joining the league.

It’s a bit of a tall order for the Tigers.

Ebert got that spread from head coach Chris Gicking, who uses that line constantly as motivation for his team, as if playing for a championship in this coronavirus-impacted season isn’t enough. Back in August, less than a week before games were set to begin, the Central League decided to delay the start of the season. A month later, league decided to play, only in a league-only format where the teams were split into enrollment classifications, with the teams that won each division pairing off for the title.

“It’s awesome because I didn’t think we were going to have a season,” Ebert said. “And now we’re playing for a championship. This is big, really big.”

“I’m just so happy for these kids,” Gicking said. “They’ve been working since March, when we were shut down, doing workouts over Zoom and things like that. We have our work cut out for us. Garnet Valley is a great program, but I’m just happy for our team that all the hard work the kids and coaches have put in is paying off.”

The Tigers didn’t get here by accident. They earned their title shot.

Marple Newtown went undefeated in the Class 5A division of the Central League and outscored its opponents 162-70, a point-differential average of 32.4-14. Quarterback Joe Paoletti is one of the top passers in the county. The senior has thrown for 604 yards and five touchdowns. Junior running back Charlie Box has rushed for 602 yards and eight TDs.

“They’re very explosive,” Ricci said of the Tigers. “It starts with their quarterback. He can throw. He can run. He’s very athletic. They have Charlie Box. He can score from anywhere at any time. They have a bunch of good receivers. They’re a really scrappy, aggressive football team.”

While they may be underdogs, and yes, big ones, these Tigers have a chance to leave their mark on the history of the program.

“It would be great to add to that banner,” senior two-way lineman and co-captain Joe Goodman said.

Delco Football Notebook: Dominant Garnet Valley aiming for third straight Central League title
Malvern Prep star Lonnie White is used to winning on the field, but his family will always be what he fights for most