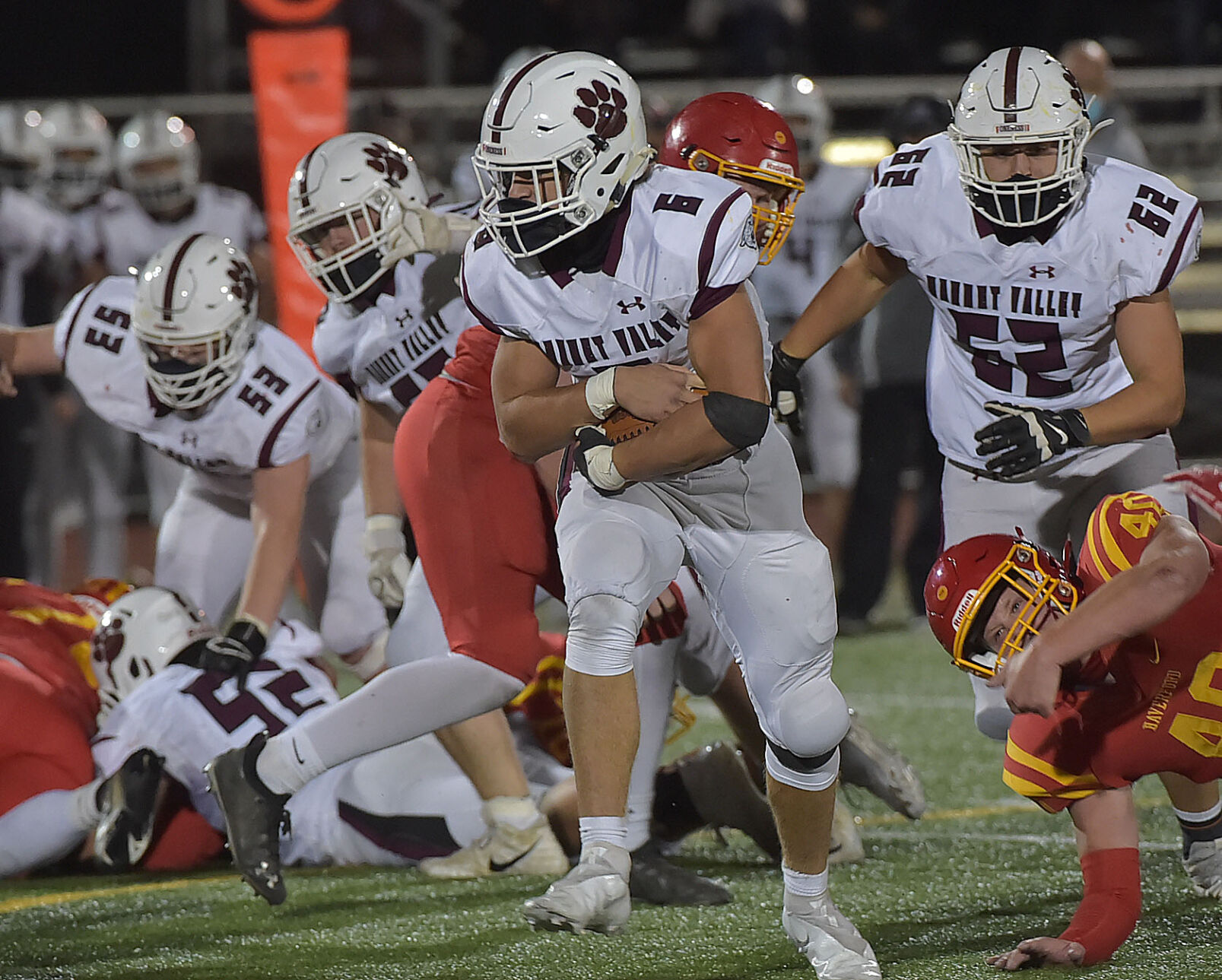 Garnet Valley’s dynasty is at stake Wednesday night when the Jaguars host Marple Newtown for the Central League championship.

Coach Mike Ricci’s Jaguars are going for a three-peat.

With the exception of a 29-28 double-overtime win at Radnor in 2018, and a thrilling 35-28 home victory over Haverford last fall … it hasn’t even been close when it comes to the Jaguars and their Central League title streak. This season, they’ve outscored their five Central League 6A division opponents by a combined score of 239-26.

The one team many thought would pose a serious challenge, Haverford, battled for a little while but ultimately succumbed to the Jags’ power running game and fast and furious defense. Garnet Valley is the Central League king and it will take a Herculean effort to unseat them Wednesday night.

“It’s something we’ve talked about a lot as a team, how we were going to deal with adversity this whole season and how important it was to stay focused on our goals,” said Shane Reynolds, who has flourished at running back and linebacker this year for the Jaguars.  Reynolds and senior Brian Bradley have paced a run offense averaging 6.6 yards per carry and 280 yards per contest.

“We’ve dealt with social distancing, staying home when all you wanted to do was go out and practice,” he added. “I know it’s going to feel really good once it pays off.”

GV’s success starts with the development of quarterback Kevin McGarrey, who has been the rare Garnet Valley QB finding consistent success throwing the football. Garnet Valley is known best for running the football, but McGarrey has shown he can do both. He has thrown for 473 yards and seven touchdowns.

It’s a shame that Wednesday evening is the end of the road for Garnet Valley. The Jags would have been a force in the District 1 Class 6A playoffs in a normal year. But the only thing that matters now is the Central League championship. A 25th straight league win would be the perfect coronation for the program.

“It’s the first time in a long time any of us has played the final game of the season knowing that it’s a championship game and it’s for all the marbles,” McGarrey said. “It’s win or go home and it’s a great feeling.”

The other big game in the Central League is scheduled for Saturday at 11 a.m. when Haverford (4-1) hosts Strath Haven (4-1) to determine the league’s third-place finisher. Other crossover games are Penncrest (1-4) at Upper Darby (3-2) Wednesday evening and Radnor (3-2) at Ridley (3-2) Friday night.

Haverford and Upper Darby will not play their annual Thanksgiving morning game this year.

In the Catholic League, Archbishop Carroll and Cardinal O’Hara will not continue their seasons.

While O’Hara’s season barely got off the ground, playing only one game because of multiple cancellations related to COVID-19, Carroll played five games and made an appearance in the PIAA Class 2A state tournament. O’Hara may explore a spring season schedule.

Bonner-Prendergast (3-0) is set to play its first game since Oct. 30 on Wednesday evening, at home against Archbishop Wood. The Friars were PIAA Class 3A tournament qualifiers for the first time, but had to opt out of the playoffs due to a positive coronavirus test.

The race for leading rusher in Delco has come down to the final weekend. The top four rushers all have a shot to take home the title.

Haverford’s Jimmy Wright leads the way with 675 yards, but Radnor’s Scott Belveal and Marple Newtown’s Charlie Box are on his heels with 635 and 606 yards, respectively. Belveal is coming off a huge 155-yard performance last Saturday, and he and Wright are tied for first in rushing TDs with nine.

Jaris Adams of Strath Haven would need a gigantic game against Haverford’s stingy defense to pass them. Adams is fourth in the county with 548 yards. Four Strath Haven players ranked among the county’s top-20 rushers: Adams, Matt Shuler (406), Chase Barlow (275) and Christian Mazur (265).

Nick Lamey of Archbishop Carroll holds a 425-yard lead as No. 1 passer in the county. The senior passed for 1,157 yards and nine TDs in five games. Lamey’s go-to guy was senior wide receiver Malachi Hansen, who leads all Delco receivers with 496 yards and four TDs. Breathing down Hansen’s neck is Radnor All-Delco Jahmir Dixon, who has 443 yards and four TDs.