Souderton gets ready for its first ever state semifinal, taking on St. Joseph’s Prep 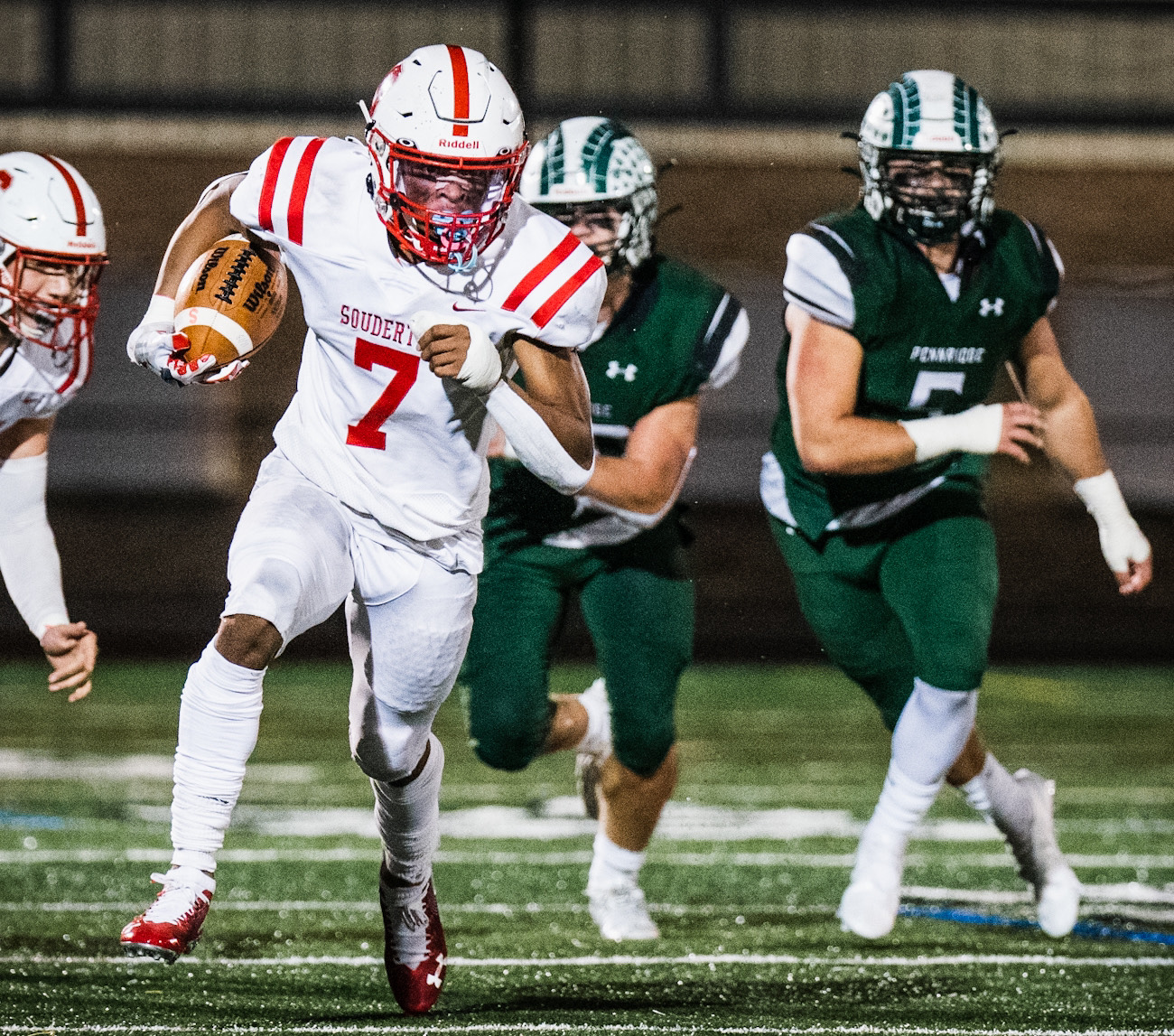 Souderton will play in its first ever state semifinal on Saturday at Cardinal O’Hara High School, taking on perennial power St. Joe’s Prep.

Kickoff is at noon.

“St. Joseph’s Prep has an extremely talented football team,” said Big Red coach Ed Gallagher, who directed the Indians to their first ever District 1-6A title. “We can’t afford to get into a shootout with them – we will need to control the football and play sound defense to have a chance.

“I know that our coaches and players are certainly looking forward to the opportunity to play such a prestigious program.” Souderton quarterback Evan Kutzler rolls out to pass against Spring-Ford during their District 1-6A semifinal on Friday, Nov. 6,2020. (Austin Hertzog/MediaNews Group)

Big Red, in the midst of an unbeaten season and recently crowned district champs for the first time, are savoring the moment.

“For this team to be in the state final four tournament is crazy,” said senior halfback Jalen White, who rushed for 144 yards and two touchdowns last week. “Last year, we were thrilled to just be ranked on a chart with teams like St. Joe’s Prep and now we’re battling them for a run at the state championship.

“The steps forward we have taken as a team with the guys that are still here from last year, from letting the conference title slip away last year to being in the state semifinal, I mean, it’s a blessing and such a great opportunity.”

Souderton gets a shot at the champ: St. Joe’s has won five of the last seven state titles in PIAA’s largest class.

“St. Joe’s Prep is an amazing team all around,” White said. “Everyone knows that and it’ll be a great challenge that we have been preparing for and will be prepared for.

“As a running back, going up against linebackers like Josiah and Jeremiah Trotter, it honestly gets me going and excited because it’s a challenge against the best of the best and I can’t wait to see how the team and I do in a game with such attention and high level of competition.” St. Joseph’s Prep quarterback Kyle McCord (6) readies a pass to the corner of the end zone for another touchdown to Marvin Harrison Jr. (8) against Archbishop Wood on Saturday, Oct. 31, 2020. (James Beaver/For MediaNews Group)

The Kyle McCord-to-Marvin Harrison Jr. connection has been a good one for the Hawks (4-0), who defeated Central Dauphin in last year’s state final.

Souderton’s Wing-T has been humming in the postseason, and quarterback Evan Kutzler has had his share of big games this fall. The Indians anticipate and embrace their biggest challenge yet.

“It means a lot to our team to be one of only four teams still in the state playoffs,” Kutzler said. “I think it is testament to all the hard work and sacrifice we’ve put in this season. We believed in each other and really held each other to a high standard all season long.

“We try to value every second we have with each other because you never know when it could end. We’ve had complete confidence and swagger in everything we do and I’m looking forward to seeing what our team can accomplish the rest of the way.” Souderton’s Jalen White rushes to the outside against Spring-Ford during their District 1-6A semifinal on Friday, Nov. 6, 2020 (Austin Hertzog/MediaNews Group)

The winner of this one heads to Hershey, to take on either Central York or McDowell.

“St Joe’s Prep is an excellent team all around. They have a lot of athletes who make a lot of big plays,” Kutzler said. “The key for us is to limit their offense and make tackles in space. We have to play fundamentally sound, not think too much, and be ourselves.

“Another big key is to control the ball on offense. If we play like we are capable of playing and limit mistakes, I think we’ll match up well. Overall, we’re excited to get to work and prove to everybody that Souderton belongs in this playoff.”

PIAA-6A Semifinals
Souderton vs. St. Joseph’s Prep
Day/Place: Saturday, 12 p.m., at Cardinal O’Hara.
On Twitter: @mpcabrey.
Records: Souderton is 7-0 overall and 5-0 in the SOL Continental. St. Joe’s is 4-0 overall and 3-0 in PCL Red.
Up Next: The winner advances to face either McDowell or Central York in the state final.
Last Week: Big Red defeated rival Pennridge 31-17 in the District 1-6A Final. St. Joe’s was idle.
Players to Watch: Jalen White has been a speedster in the Wing-T attack for Big Red, with accurate, timely passing provided by quarterback Evan Kutzler. Ohio State recruit Kyle McCord has been airing it out this year for the Hawks. One of his favorite targets, at wide receiver, is Marvin Harrison Jr.
Prediction: Souderton 35, St. Joe’s Prep 34.