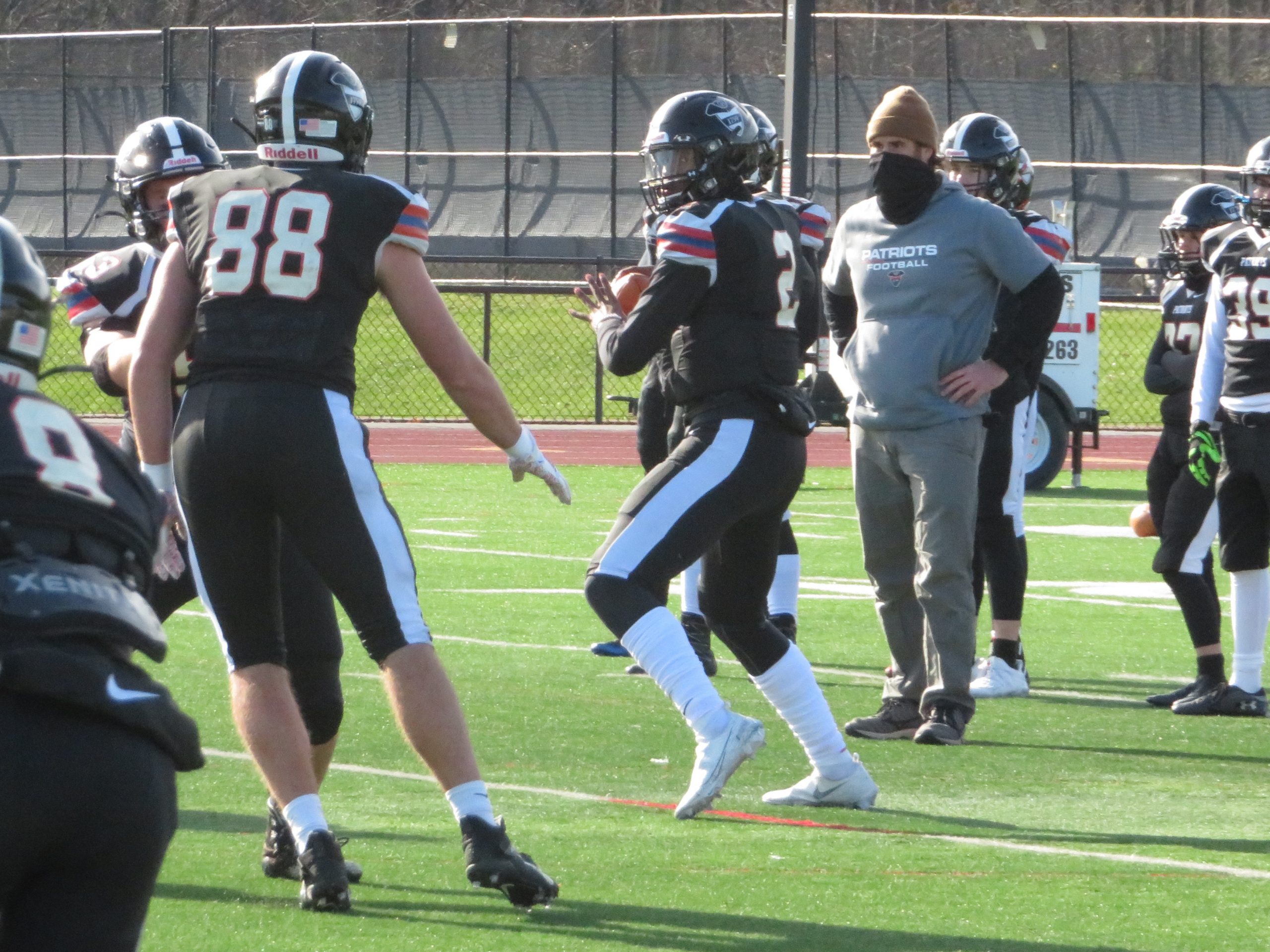 WHITEMARSH >> Germantown Academy could have rolled over.

After allowing two 3rd-and-long touchdowns to fall behind by 14 points early in the second half of the season finale, it would have been easy for the Patriots to get down on themselves and look forward to the offseason.

Instead, GA responded, scoring the final 28 points to end their season with a 38-24 Inter-Ac win over Springside Chestnut Hill at Carey Stadium Thursday afternoon.

“The fact that we didn’t tank after that – I said that’s what a GA football player does and I’m really proud of them,” GA coach Matt Dence said. “Especially our seniors – they were awesome.”

“We’ve been in situations like this even last year and this year,” GA quarterback Jordan Longino said. “We don’t even worry about it. The coaches keep us calm. We just go back into our gameplan, stay the course and we have the athletes and the guys up front to do the work. We ended up going out on top. It wasn’t a surprise to us.”

The Patriots took the ensuing possession and went 68 yards in six plays, capped by a 47-yard Brian Allen touchdown run. After forcing a three-and-out, GA went 75 yards in 10 plays, tying the game at 24 when Longino and Jerry Griffen-Batchler connected for a 41-yard touchdown.

After Evan Spivey grabbed an interception to halt SCH’s drive inside the GA 20 yard line, the Patriots put together another impressive drive. After eight running plays covered 55 yards, Longino hit Michael Rowan for a 30-yard score to go ahead, 31-24, with 7:56 remaining in the game.

“Once we got the run game going in the second half, our line held up the whole game – all I have to do is step up and make the throws,” Longino said, crediting Lacey Snowden for his 23-carry, 87-yard performance. “We’ve got weapons all over the field. Jerry, Jake Hsu, Mike McGhee, Mike Rowan – they make my job easier.”

Hsu intercepted another pass on the third play of the Blue Devils drive and Longino found McGhee for a 55-yard touchdown on 3rd-and-12 to put the game away with 5:38 remaining.

Thursday’s game appears to be Longino’s last time playing organized football. The Villanova basketball commit went 15-for-29 for 311 yards and four touchdowns – hitting Griffen-Batchler for a 78-yard score in the first half before the three touchdowns after intermission.

“Sadly I’ve gotta hang up the cleats,” Longino, who threw four touchdowns against Springside Chestnut Hill in their first meeting earlier this month, said. “It’s been fun. Football is something that I love – it’s been my love ever since I was six-years-old. It’s going to be tough to hang up the cleats, but I can’t wait to get to Villanova and get to work.”

“He’s one of the all-time great GA quarterbacks,” Dence said. “He’s on the Mount Rushmore. I think he’s third all-time in passing, he has the single-season record. He’s an all-time GA person.”

The Patriots finish the 2020 campaign with a 3-1 record. Like most fall sports teams in the area, GA was thankful to have a season during the COVID-19 pandemic.

“It was a good season,” Dence said. “I just feel so fortunate that we could play with all this stuff going on. Tim Ginter our AD, Rich Schellhas our Head of School had the confidence in us that we were going to do things the right way and we were able to keep our kids healthy. We were able to play four games. I’m never going to take anything for granted in this game ever again. This is one of the greatest teams – I’ve never had a more talented senior class. This is one of the greatest teams we’ve ever had. To get it cut short for four games, yeah it stinks when you look at it, but I’m blessed that we were able to play four games with these guys. What a group.”