Jack-of-all trades Purvy does it all for Souderton 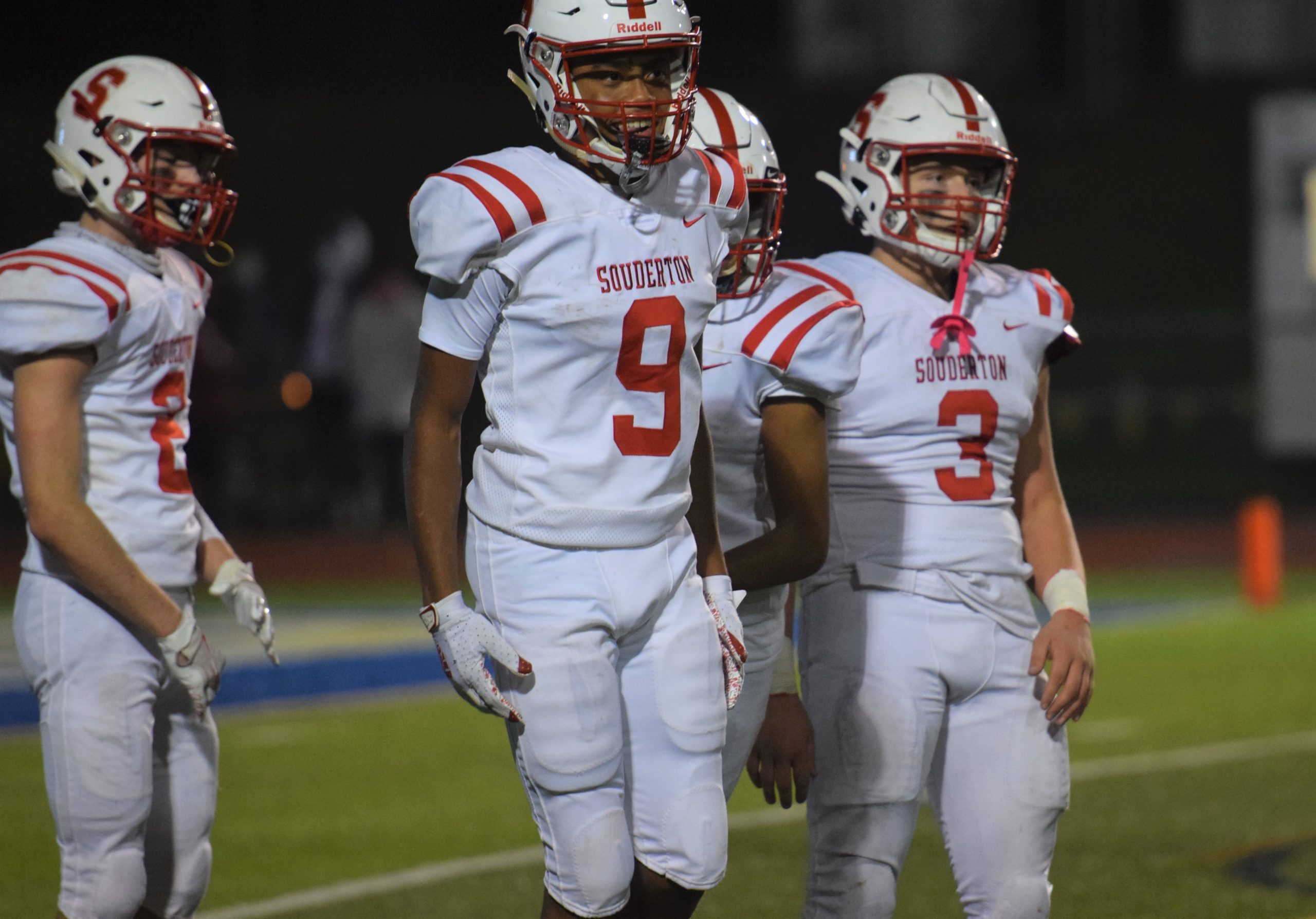 ROYERSFORD >> Shaun Purvy impacted all three phases of the game during Souderton’s 27-24 District 1-6A semifinal win over Spring-Ford Friday night.

Purvy set up the Indians first score when he returned a punt 29 yards to the Rams 39-yard line. The next play, Brayden Porter ran for a touchdown with 8:26 left in the first quarter.

In the second quarter, the 5-foot-10, 147-pound Purvy had another big punt return, this time racing 28 yards to Spring-Ford’s 27. Again, Porter ran for a touchdown on the first play of the ensuing drive to build a 20-0 lead with 6:47 remaining before halftime.

Purvy also had a kickoff return out past the 35-yard line to help Big Red grab some momentum during Spring-Ford’s fourth-quarter comeback attempt.

“Shaun Purvy is an explosive athlete,” Souderton head coach Ed Gallagher said. “We’ve been trying to get him the ball a little bit more offensively, but he’s been a great returner for us, he’s playing great in the secondary for us and he’s only a sophomore. It’s exciting for him for two more years.”

Defensively, Purvy helped lead a secondary that limited Spring-Ford to 9-for-22 passing and 95 yards through the air.

The cornerback’s defensive play of the night came in the middle of the second quarter. After Porter’s second touchdown gave Big Red a 20-0 lead, the Rams returned the ensuing kickoff to Souderton’s 32-yard line.

After the Spring-Ford offense picked up a first down, Purvy grabbed an interception to end the threat and help the Indians head to halftime with a three-possession lead.

Offensively, Purvy made one catch, a 12-yard grab on 3rd-and-7 to allow Souderton to hold the ball until halftime.

“The more I’m on the field, the more I can do — whatever’s best for our team,” Purvy told PaPrepLive.com after the game.

FINISHING STRONG >> Souderton’s 20-0 lead lasted late into the third quarter and looked like it was going to be enough to punch their ticket to the district title game.

Over a 4:44 stretch ending the third quarter and starting the fourth, Spring-Ford made a field goal, returned a fumble for a touchdown and scored an offensive touchdown to get within three, 20-17, with 7:23 left in the game.

The Indians responded with a nine-play, 62-yard touchdown drive to build the lead back to 10, 27-17. Key plays included a 3rd-and-8 pass conversion for 22 yards from Evan Kutzler to Sean McGoldrick, a 10-yard run from Jacob Horton to set up 1st-and-goal at the three and a two-yard sneak for a touchdown by Kutzler with 3:21 remaining.

Souderton wasn’t out of the woods yet. Spring-Ford returned the ensuing kickoff for a touchdown and had enough timeouts to get the ball back.

The Indians never gave the ball back. Six plays and a key Spring-Ford offsides later, the clock showed zeroes and Souderton was celebrating its District 1 semifinal win.

“We knew we had to pound it down their throats and get the first down every time,” Horton said of the final two drives where they ran the ball on 14-of-15 plays. “If we did, we would run out the clock and take the dub.”