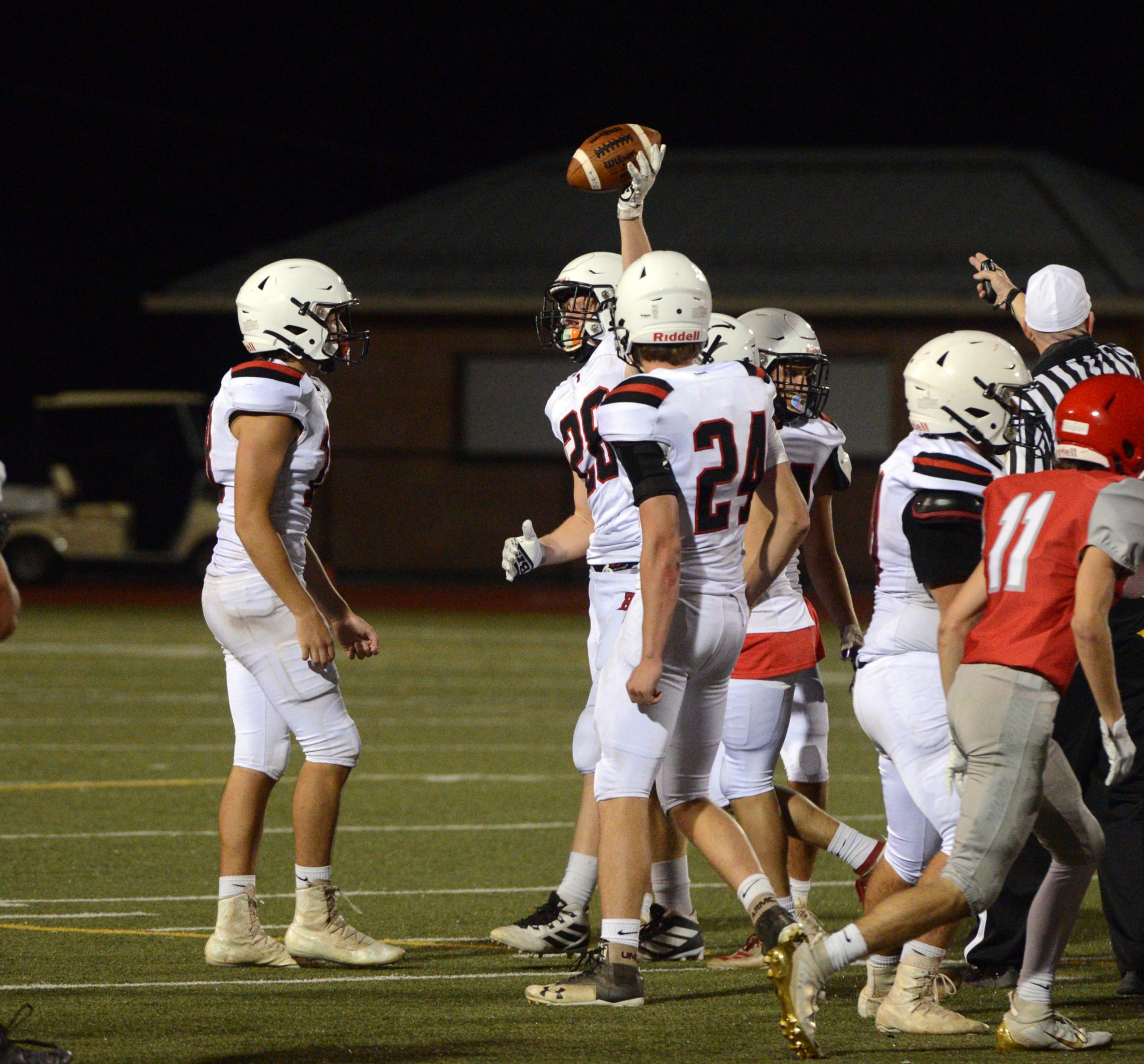 After starting the 2020 season with five consecutive losses, no one could have blamed the Boyertown seniors if they’d packed it in for the year.

There were no championships to be won, no next season to use as incentive – and 2020 has clearly been more mentally trying than your average football season.

Instead, the Bears rallied around freshman quarterback Ryder Gehris, ending the campaign with consecutive victories over Pottstown and Pottsgrove – the latter coming at home Friday night by a score of 20-9 – leaving a legacy for the Class of 2021 and cause for excitement for the program’s future.

“I can’t say enough about our defense these last two weeks,” said coach TJ Miller after Friday’s victory. “They’ve taken it upon themselves in the latter half of the season to re-define Boyertown football – before, we were a triple-option team, now we’re a defense-first team.”

The Bears rallied around seniors Zach Davis, who returned from injury with 11 tackles and a fumble recovery against Pottstown, Noah Segal, and Jon Myers in limiting their last two opponents to 15 total points in the two victories.

On the offensive side, Gehris’ first two starts were aided by traditionally strong Boyertown rushing performances, highlighted by Myers’ two best games of the season on the ground (38 carries at over five yards a pop, four total TDs vs. Pottstown and Pottsgrove combined). But for Coach Miller, the star of the entire operation was the former starting quarterback, Noah Segal.

“He’s the heart and soul of our team,” said Miller. “When we told Noah we were making the change at quarterback to Ryder, his first question was ‘can I move to receiver?’ No ego, no selfishness – he’s willing to block, catch, and he’s been able to help Ryder along the way in these first two starts. What he did for Boyertown football … I can’t put that into words.”

Boyertown’s Noah Segal (16) tries to get out of the grasp of Owen J. Roberts’ Francis Mccoy (48). (Owen McCue – MediaNews Group)

The selflessness shown by Segal was eased by Boyertown’s never-say-die approach as a program, eschewing the opportunity to allow underclassmen to build experience in favor of maximizing the potential of the 2020 squad.

“We don’t look at ourselves within the season and say, ‘next year, we’ll be able to do this,’” said Miller. “We’re not looking at 2021 at all. That’s not fair to the kids on this team. It’s about what we can do this year to win.”

Miller doesn’t buy into the idea that ground-based attacks like Pottstown and Pottsgrove are better matchups for the Bears than some early-season opponents due to their familiarity from practice with defending those attacks.

“As a Wing-T team, Pottstown is showing up different blocking schemes up front,” he explained, “Pulling guards, misdirection… those are a lot of things we don’t do. Plus, these past couple weeks we were able to run our offense out of the shotgun a little more.”

“More than anything, our players stepped up to the challenge against two tradition-rich programs in Pottstown and Pottsgrove to get these wins.”

For Miller, it was the ideal ending to a season of ups and downs, but one that he’ll remember for the resilience of his players and their desire to compete.

“These past two weeks, our kids made a decision that we were going to dictate every phase of the game,” he said. “These kids have been through a lot – I’m happy we got to play football, and I’m happy we were able to turn things around – it’s a credit to our seniors.”

Around the Area >> Spring-Ford’s season came to an end with a 27-24 loss to Souderton in the District 1 Class 6A semifinals Friday night. The Rams fell behind 20-0 before reeling off 17 straight points to make for a thrilling fourth quarter. Nasir Cooke’s second sack of the night led to a Josh Hellauer fumble recovery for a touchdown, and Zach Zollers’ first career TD reception narrowed the gap to 20-17.

After Souderton responded with a scoring drive, sophomore Gage Swanger returned a kickoff 91 yards to give the Rams a final chance, but the two-time defending PAC champs ran out of time. Souderton moves on to battle Pennridge for the District 1 title Friday night, while Spring-Ford finishes at a record of 6-1.

Upper Merion’s Jalen Alexander set a new PAC standard for 2020 with 261 rushing yards and three scores in the Vikings’ first win of 2020, a 35-6 decision over Phoenixville.

It was an efficient night for Perkiomen Valley’s Ethan Kohler, as the junior QB completed 10-of-13 passes for 163 yards and two scores, adding another touchdown on the ground in the Vikings’ 31-7 win over Daniel Boone. Aidan Owens added the other PV touchdown with a 75-yard return of a blocked field goal in the first quarter.

Methacton sealed their first winning season since 2014 with a road victory over Council Rock South, 13-0. Justin Carfrey slammed his way to 176 rushing yards and a score, with Mike Merola connecting with Brian Dickey for the other score. Matt Blakemore had a pair on interceptions for the Warriors, who finish at a mark of 4-3.

A Look Ahead >> Mercury-Area teams are set to round out the season this Friday with a quartet of games, headlined by a would-be Frontier Division showdown between Pope John Paul II and Pottsgrove at Pennypacker Field. The contest, rescheduled from Oct. 9, is the Golden Panthers’ chance at an undefeated record over their abbreviated four-game slate. PJP’s game this past Saturday with Cardinal O’Hara was cancelled due to a COVID exposure within the Lions’ program.

Elsewhere, Phoenixville and Pottstown battle in another traditional Frontier rivalry, while Perk Valley travels to Quakertown in a rematch of a 2018 6A playoff game. Daniel Boone winds down the campaign with a visit to Conestoga Valley.

Jack-of-all trades Purvy does it all for Souderton
Do or die: Unionville edges Shanahan to advance to district final