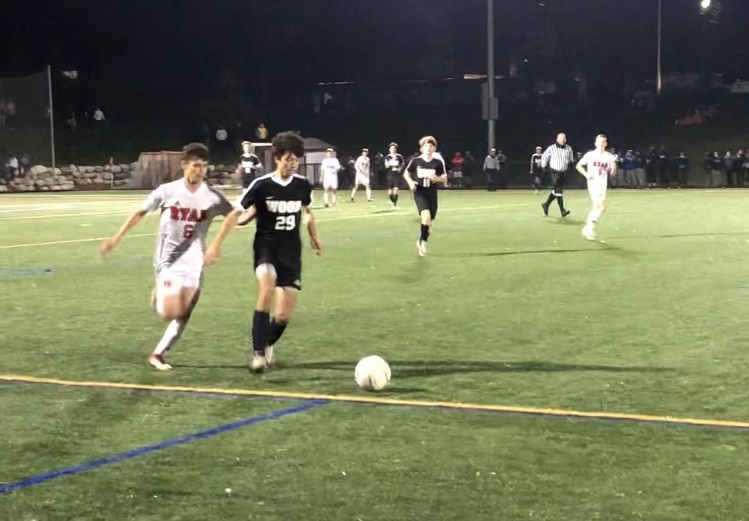 BRYN ATHYN >> Joey Phillips is only a sophomore, meaning PCL teams have two more years of frustration awaiting them.

The Archbishop Ryan goalkeeper quickly established himself as one of the league’s best during his freshman season and with a state playoff bid at stake on Friday, only continued to build on his reputation. Phillips made three remarkable saves in the final 10 minutes to help snap Archbishop Wood’s streak of state playoff appearances and give the Raiders a shot to play for a title.

“The saves don’t matter unless your team scores, so I’d congratulate Sidiki (Fofana) and Teddy (Westervelt) on their amazing goals and we’ve playing like this all year,” Phillips said. “We deserved it.”

Last year, both teams made the PCL semifinals, but Wood’s better finish in the league sent the Vikings on to the District 12 3A title game. With no PCL regular season or playoffs this year and contracted PIAA brackets, Friday night’s game was a de facto playoff, with the winning team getting District 12’s spot in the state bracket.

Wood had made the state tournament every year since 2016 but due to this year’s format, saw that run come to an end Friday. The Vikings, who only just started playing this week, still have games to play and coach Hugh Kelly said he’ll look to add more with the PIAA opening the door for teams to play until late November.

“We definitely dropped off at half,” Kelly said. “I didn’t see any big adjustments they made, we just didn’t play as well in the second half. We didn’t finish, we had a couple good opportunities but their goalie came up big.”

Ryan’s pace and ability to transition quickly would be a factor throughout the game. Westervelt wasted little time in forcing the issue, taking a rip that Wood keeper Eric Krause pushed over the bar for a corner.

The Raiders were also good at drawing corner kicks, getting nine attempts in the match. Fofana forced Krause into another terrific save later in the first half, blasting a free kick the Wood junior again had to push away for a corner.

After that initial surge by Ryan, the Vikings settled into the game and created a few chances. Wood’s first corner would pay off and Phillips had no chance to prevent the Vikings from taking a lead when Giuseppe Propato’s follow up shot rippled into the goal.

“We were all just so focused on the game,” Phillips said. “Maybe they thought because they scored, they beat us. We have the Ryan mentality, we came out and we fought and in the end, we won.”

While Wood led at the half, the Raiders felt they were ready to take the game over after halftime. To prove their point, it only took a couple minutes for them to equalize. James McDonnell fired a ball through the Wood defense that found Fofana in stride and the senior striker converted for the tying goal.

The Vikings would be on the defensive for much of the half and losing three players to injury during the course of play didn’t help their efforts to break Ryan’s pressure.

“We got outworked, we don’t have our legs about us but we’re not here making excuses,” Kelly said. “The first half I thought we played pretty well but the second half, I thought we got trashed in the midfield. They were completely countering the whole time, we tried to play deliberate and not random, but you still have to play the game.”

After trading corner kicks for a stretch after the tying goal, Ryan was able to turn one of its quick transitions into another opportunity. Westervelt, a senior captain, was able to get isolated on the left side of the box, made a move past a defender and slipped a hard shot across the ground to the far post for the go-ahead goal in the 65th minute.

Now up a goal, Phillips didn’t put himself under any extra pressure to make saves.

“It’s all the training our coaches do, it prepares us for all the different situations we could see,” Phillips said. “You just have to be ready for anything, always. If they scored at any point in the game, it’s 2-2 and anyone’s game, if you go into extra time or PK’s then it’s really anyone’s game, so once we went ahead, it was all up to us.”

If it was up to Phillips, he was making the save to close the game. The sophomore’s first game-saver came off a Wood corner when reflexed-saved a shot by Matthew Haub up and over the bar to hold the lead.

A few minutes later, Phillips made a super diving stop, going horizontal to his left to rob Collier of a shot the Wood senior was so sure was going in, he had already turned ready to celebrate. Again, a corner led to a Wood chance, with Collier recycling the effort by fighting through the defense and playing a ball across that found its way to Lou Daniele for a close-range shot.

Phillips again went left, smothering the ball in front of the goal line and leaving the Wood defender to grab his head in disbelief.

“He stoned us several times,” Kelly said. “Absolutely, he played a great game.”

Ryan will face the District 11 champion in the opening round of the state tournament on Nov. 10. The winner of that game will face District 1 champion Upper Moreland in the second round.

Archbishop Wood has games next week at Upper Merion on Monday and at Malvern Prep on Thursday. The Vikings will also play Lansdale Catholic on Nov. 22 and Kelly said he’s looking to add more contests to give his team more opportunities to get on the field together.

“We want to give our seniors a chance to play but also bring along some of the younger guys,” Kelly said. “We have a pretty good mix so we’ll try to take advantage of these other games, try to learn some lessons from this one and keep focused on what’s coming.”