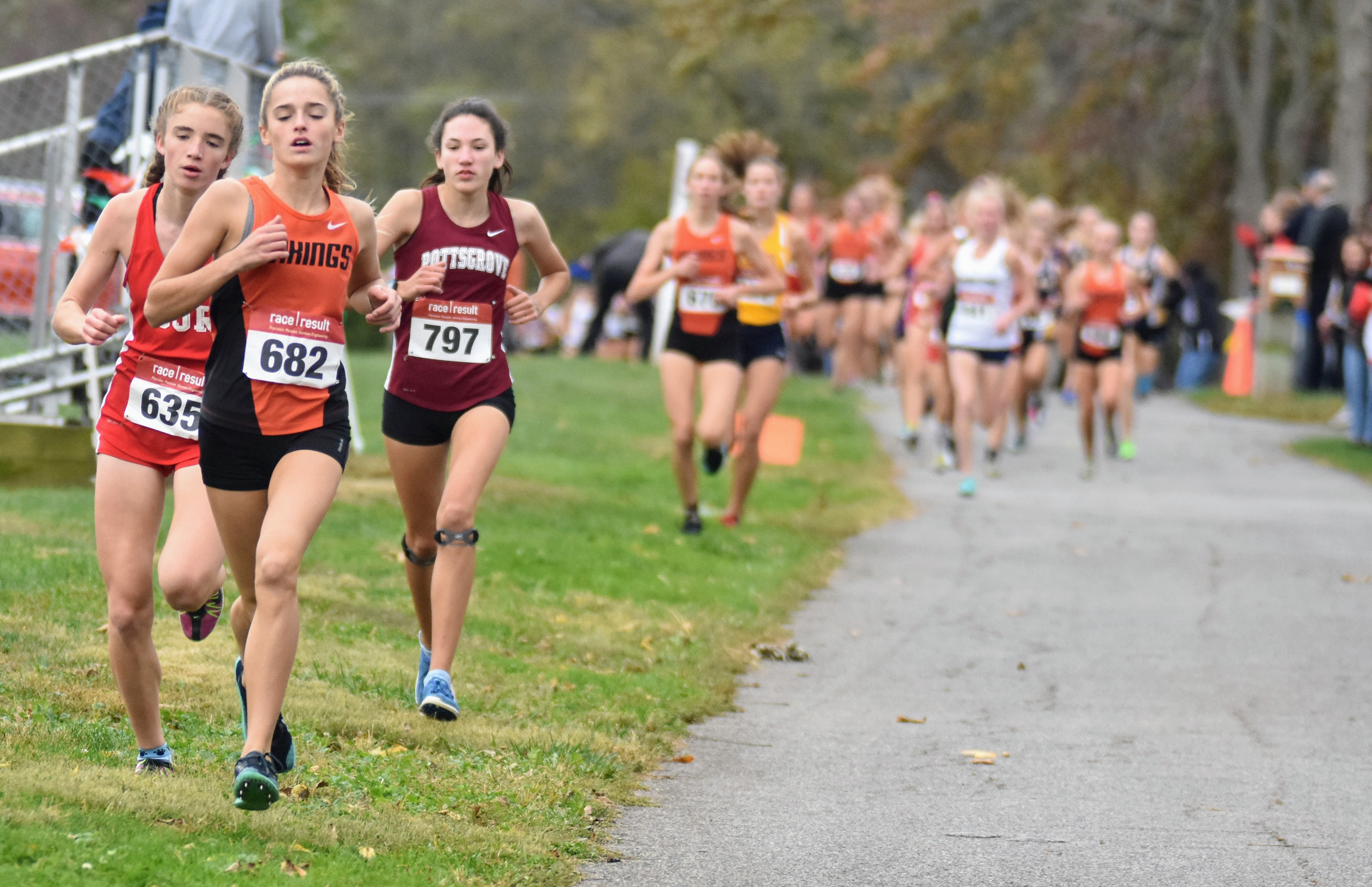 First the pandemic, now the weather.

The 2020 high school cross-country post-season is not shaping up like any that have gone before it. Different venues, different qualification standards, elimination of some meets, rescheduling of others … it has a distinctively different look from past years. That’s certainly the case in District 1, where runners from the various schools are looking to reach the Pennsylvania Interscholastic Athletic Association’s championship competition next week — and under different qualification parameters, due to the COVID-19 pandemic.

The district had originally scheduled its meets for Thursday and Friday at Tyler State Park in Newtown. The plan was to run the girls’ races the first day and the boys’ the second day; however, a forecast for heavy rain — the remnants of Hurricane Zeta working its way through the southern and eastern United States — prompted a rescheduling and consolidation of the meets to Monday, Nov. 2.

Coronavirus concerns, and emphases on health and social distancing, have resulted in a smaller field of contestants in Class 3A.

“The field at districts has been cut by more than half,” Perkiomen Valley head coach Ryan Sullivan, whose boys and girls teams have both qualified for the 3A competition, said. “Usually all 59 teams in District 1 are allowed to compete. Now, it is only the top 2-3 teams from each league.”

The top teams in the Pioneer Athletic Conference during its dual-meet season will be joining PV in 3A. That comprises regular-season champion Spring-Ford, Owen J. Roberts and Methacton on the boys’ side, and OJR and Methacton joining the champion Vikings on the girls’ side.

“It’s a reward to run like an invitational, a big meet,” Roberts head coach Tim Marcoe said, estimating the 3A fields could number approximately 65-70 runners. “Competing with 70 other athletes of comparable talent … that’s one of the things I like.”

Team qualification for the Nov. 7 PIAA Championship meet will be significantly reduced. In contrast to the customary six schools able to advance to states in past years, only the district’s first-place team will be going on as a unit.

“This has a huge effect on our girls team, which is currently one of the top teams in District 1,” Sullivan said. “It will be obviously much, much harder to get to states this year.”

The 3A contestants will run in two heats based on how their teams did during the regular season. League champions and high finishers will be in the first race, the remainder of the teams in the second.

The Viking girls (6-0) dominated their PAC races this fall, sweeping the Top 10 twice and placing in the first seven and eight two other times. Freshman Sienna Miller won six of the seven races — junior Delaney O’Sullivan headed PV’s finale with Boyertown — while sophomore Summer Watts, the PAC’s 2019 meet champion, has been a consistent high finisher.

The Spring-Ford boys were dominant in their own fashion, also going 6-0 against the rest of the PAC. Their 1-2 punch of Quinn Smith and Liam Baker headed a lineup that worked through the restrictions forced upon it by the pandemic — the Rams weren’t able to have team workouts until Aug. 24, in contrast to starts around the June 24 time frame in the past — and having two of their top five runners from 2019 opt to not come out this fall.

“The kids ran on their own,” SF head coach Dave Cain noted. “I sent out running schedules of what they should do, mileage-wise. We wanted to make sure the kids are able to compete.”

Owen J. Roberts was runner-up in both PAC brackets, tied for second with PV and Methacton (5-2) among the boys and all alone in second (6-1) among the girls.

Andrew McGonigle, a sophomore who won five duals and had a second-place finish in another, leads the Wildcat boys. Leading the girls will be sophomores Maggie Lustig, winner of four PAC meets, and Claire Zubey, winner of three others and a third-place finisher in the district’s 2019 Class 3A race.

“Claire Zubey has a shot at making states,” Marcoe said. “It will be a little tighter in some respects … we’ll compete, run hard and see how we do.”

The PV boys’ most promising competitor is Kabiru Brown. The senior has stepped up to fill the vacancy left by graduated teammate and 2019 PAC Championship Meet winner Tyler Clifford, winning four PAC races and finishing second in three others.

“Our boys team will hope to qualify Kabiru Brown to states,” Sullivan noted.

In Class 2A, Pope John Paul II will be looking to reassert itself as a district power. The girls will look to defend their 1-2A team championship, the boys to improve on a third-place team showing in their bracket.

“With numbers down due to the pandemic we are hoping for a few individual State qualifiers,” PJP head coach Lisa Cagliola said, adding the program will be represented by seven boys and six girls. “Our top two girl athletes are Gianna Cagliola (third last year at Districts) and Katy Todd (sixth), and we are hoping for them to qualify individually for states.

“Our boys, Jack Flynn and Jason DiMarco, finished fourth and fifth last year, and we are looking to see them qualify for states again this year. Keep an eye on Patrick McCafferty and Owen Bator; they have been looking strong during this abbreviated season.”

The Pottsgrove boys were the 1-2A team champion in 2019; their top runner this fall has been junior Brendan Vaughan, a consistent Top 10 finisher. On the girls’ side, senior Naomi Hillen will look to finish her scholastic career on a strong note, winner of several races and a consistent Top Three runner during the regular season.

Pottstown, getting a late start to the 2020 season due to the school district’s decision against competing in the early months, has seen Darius Smallwood solid in limited exposure. The Trojan senior, running as part of the Pottsgrove/Upper Merion dual, won with a 17:36 clocking that was more than a minute ahead of the rest of the field,

Looking ahead to the Nov. 7 PIAA Championship Meet at Hershey’s Parkview Course, the race schedule will be as follows: