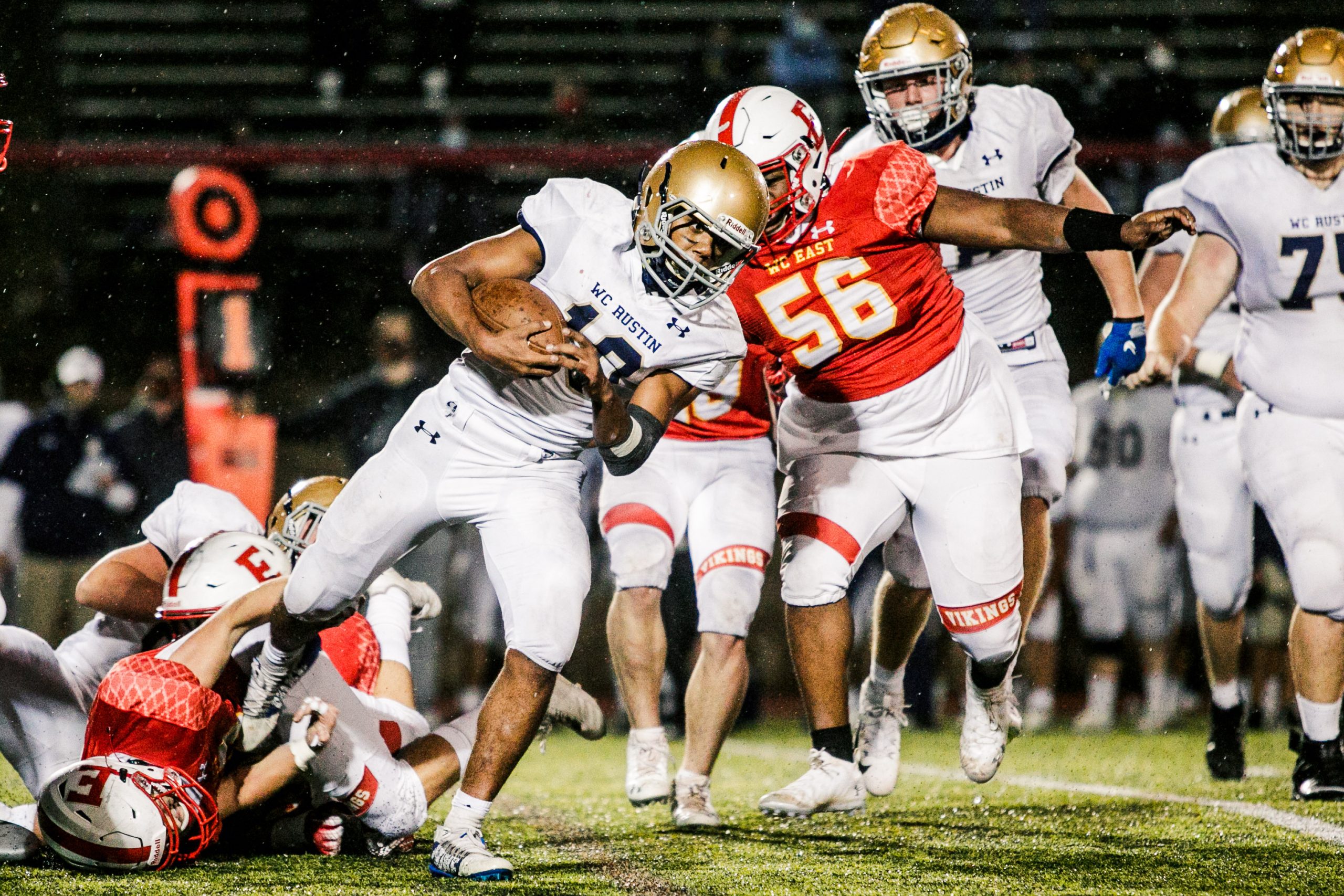 WESTTOWN >> Watch enough high school football games and eventually you will see something you have not seen before.

The Downingtown East football team has long prided itself on tough, physical football. You may beat the Cougars, but they never get pushed around by anyone.

Friday night at West Chester Rustin High School, the host Golden Knights pushed the Cougars all over the field, rushing for 362 yards — 215 by junior Dayshawn Jacobs — and the Golden Knights punched their ticket to the opening round of the District 1 Class 5A playoffs with a convincing 32-13 drubbing of Downingtown East.

It was a crazy night in the 5A field, as No. 1 Unionville and No. 3 Wissahickon both lost. Both kept their spots in the abridged four-team field, but Rustin jumped Unionville to reach No. 2, unofficially.

The Golden Knights will host No. 3 Unionville on Friday in a rematch of the season opener, which Unionville won, 35-27. No. 4 Wissahickon will travel to No. 1 Upper Dublin in another opening night rematch.

West Chester Rustin (3-1) jumped out to an early 6-0 lead when the Golden Knights took the opening kickoff and used a third down screen pass from quarterback John Crispino to Tyler Flynn for a 65-yard scoring pass.

Then, after Downingtown East (1-3) pinned the Golden Knights at their own 1-yard line with a perfect punt from Joel Mindek, Rustin used a beautiful nine-play, 99-yard drive to make it a 13-0 lead. Jacobs went the final 18 yards for the score. Jacobs carried the ball 22 times for 215 yards and seemed to find yardage where there seemingly were no holes.

“My offensive line did a great job for me tonight,” Jacobs said. “They are big and strong and they moved them around up front for me. and when Tyler [Jacobs] went out I knew I would get a lot of the carries and I was okay with that. To make the playoffs by beating a team as good as they are is a great feeling. I think we can get on a run now.”

Fellow running back Tyler Flynn did not play the second half because of a collarbone injury. But with the Golden Knights leading 20-7 at halftime, it was time for the Rustin defense to step up against the Cougars’ expected onslaught.

And step up they did. The Rustin defense virtually shut out Downingtown East in the second half while the Golden Knights were putting up 12 points. Down 26-13, the Cougars used the passing of impressive sophomore Jamy Jenkins (188 yards on the night) to get into Rustin territory early in the fourth quarter.

Jenkins was hitting his favorite target, Max Stevenson, who caught five passes, as the Cougars drove down the field. But, on a third down play Jenkins attempted to go deep and was picked off as Jacob Mattei leapt high in the air, killing another Downingtown East drive.

“The defense really stepped up for us tonight,” said West Chester Rustin head coach Mike St. Clair. “They were tougher the entire 48 minutes against a real good team and they made all the stops they had to tonight.”

Downingtown East kept trying to come back, and on a third and 20 play in the fourth quarter, Jenkins hit Nick Lovenguth with a 30-yard touchdown pass and it was a 26-13 game with a little over nine minutes to play.

But, after getting the kickoff at their own 33-yard line, the Golden Knights kept grinding up first downs and kept the clock running behind the running of Jacobs and Anthony Meadows. With just under a minute left, Crispino put the icing on the cake with a 2-yard touchdown run, and the Golden Knights were going to the playoffs, while the Cougars were left to wonder what the heck just happened.

“Our offensive line does a great job,” St. Clair said. “They work hard and listen to the gameplan from coach Tim (John). And the Jacobs kid was special and we are down to our third and fourth running backs and these kids never stopped believing. This was one of the best wins ever for Rustin football.”