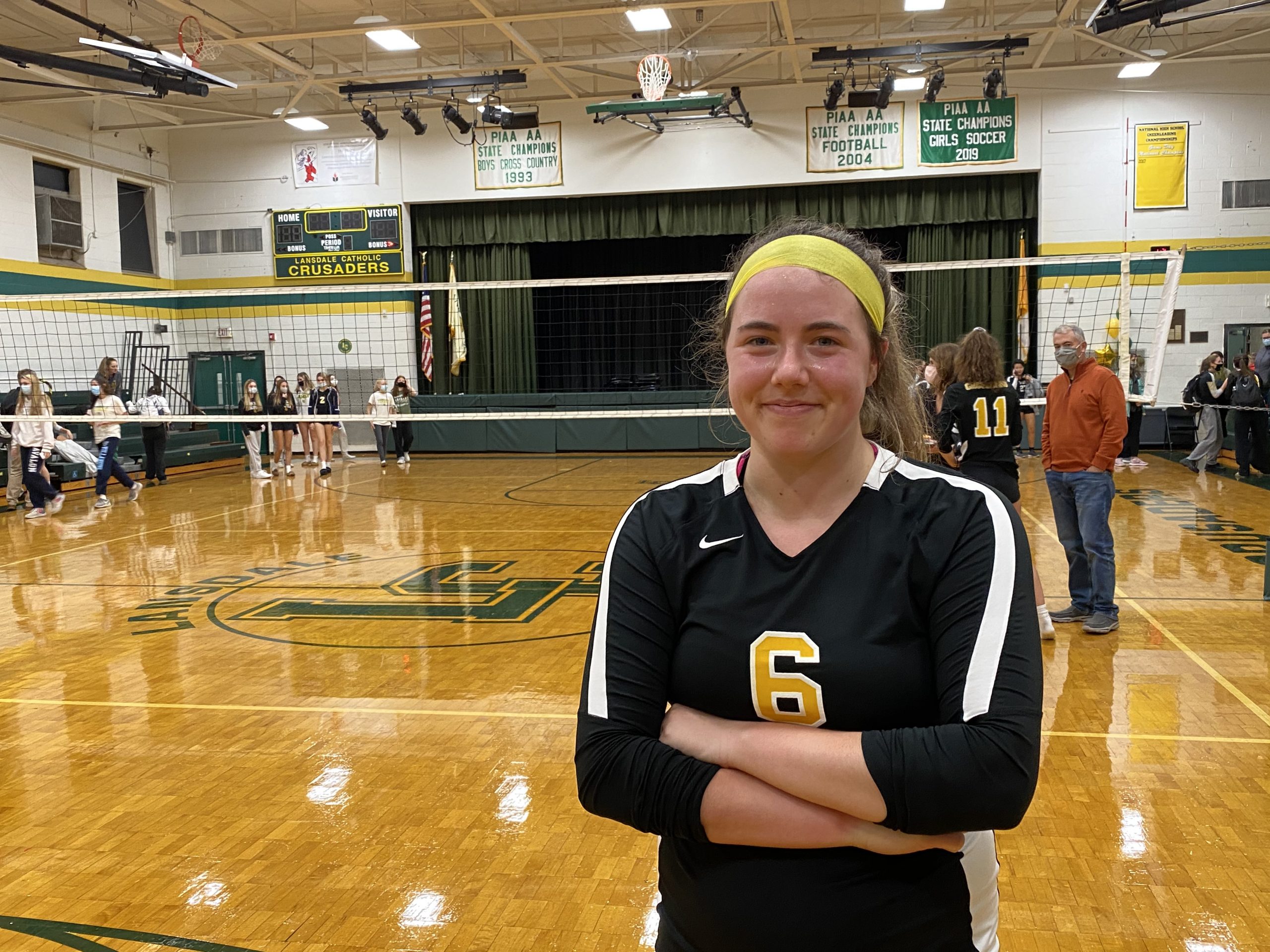 LANSDALE >> The roller coaster nature of momentum in volleyball is not a problem for Lansdale Catholic’s Regan Quigley.

“We’re like a wild team but I love it,” the senior captain said. “We always start off strong and then we just kind of get ahead of ourselves. But it’s so fun because when it gets exciting you don’t know what’s going to happen that makes it even more fun, unpredictable and just more exciting to be in the game.”

It was more ups then downs for the Crusaders girls volleyball team Thursday night against Archbishop Wood. LC built sizeable leads in each of the three sets before fighting off the Vikings’ late rallies to secure a 3-0 (25-19, 25-18, 25-20) victory on Senior Night.

“To be able to have a Senior Night at all is just it feels amazing,” Quigley said. “I’m so grateful. Four years with this team and pretty much a different crew each year, it’s kind of switched up. It’s been so great and so happy we got to have this cause I love these girls, I love my coach, I love this school and I’m so happy we got to represent LC with this night and it was great.”

It did not appear the Crusaders (4-2) were going to have a chance to hold a Senior Night or have any matches at all when the Archdiocese of Philadelphia cancelled the fall sports season for its 17 high schools in August. But on Sept. 25, the Archdiocese announced it was reversing course and allowed its schools to resume play.

“It’s amazing because honestly we started working out and doing practices for what we thought our actual season in August and then we heard it wasn’t going to happen,” Quigley said. “We were devastated, we love it so much. And then the news that we were going to have a season was it came out so sudden we started practices right away.”

Playing its third match in three days, the Crusaders were looking to end the week on the upswing after losing to Pope John Paul II – the defending District 1-3A champ – Tuesday then Wednesday falling to Archbishop Carroll, last season’s Philadelphia Catholic League champ.

Thursday against Wood, LC got off to a quick start – collecting the first five points of the opening game in jumping out to an 11-3 lead. Lansdale Catholic never trailed in the first two games and erased an early deficit to the third to complete the sweep.

“We have a really tough week, two really great teams – really strong coaching staff, players, all around – so we fought our hardest there, we didn’t want to end the week with another loss,” LC first-year coach Rachel Picozzi said. “We wanted to come out and kind of bring it back up and have our efforts show out.”

Wood (0-4) did not go down quietly in any of the Thursday’s games, whittling down LC’s leads to get within striking distance late – four points in the first game, three in both the second and third – but the cushions the Crusaders built proved large enough to stave off any comeback.

“It’s kind of our style of play that like roller coaster up-and-down where we get a good run, get a good serve,” Picozzi said. “It’s very easy to get in your head mentally, especially just the nature of the season we’re in with this go, go, go. So it’s always that go, go, go mentality and sometimes we just need to bring it back, restructure, regroup before we kind of come back out.”

“Honestly, I would have no other year as my Year One as head coach,” Picozzi said. “It really forces you to jump in, all in all the time. It doesn’t give me room for error, so I really kind of would prefer this actually.”

“When you get a lead like that first especially with good serves and a get a run and get momentum, you definitely feel you have some room, some leeway,” Quigley said. “Maybe try some hits you haven’t done, just do something, try something new.  So I guess having a lead does give you a bit of comfort but you definitely don’t want to stay like that cause it could swing so quickly.”

The Vikings claimed six of the next seven points to cut the margin to 21-18 after a Haley Lawyer ace only for Lansdale Catholic to respond with a 4-0 run for a 25-18 win and two games to none lead in the match.

The Vikings won the first three points of Game 3 before LC took the following four. The Crusaders took the lead for good at 9-8 and began to extend the advantage, going up 17-10 after a 4-0 burst. LC led by seven four more times – the last at 21-14 before a 6-2 run got Wood within three at 23-20. Lansdale Catholic, however, captured the next two points – Quigley kill’s sealing the 25-20 victory and the sweep.