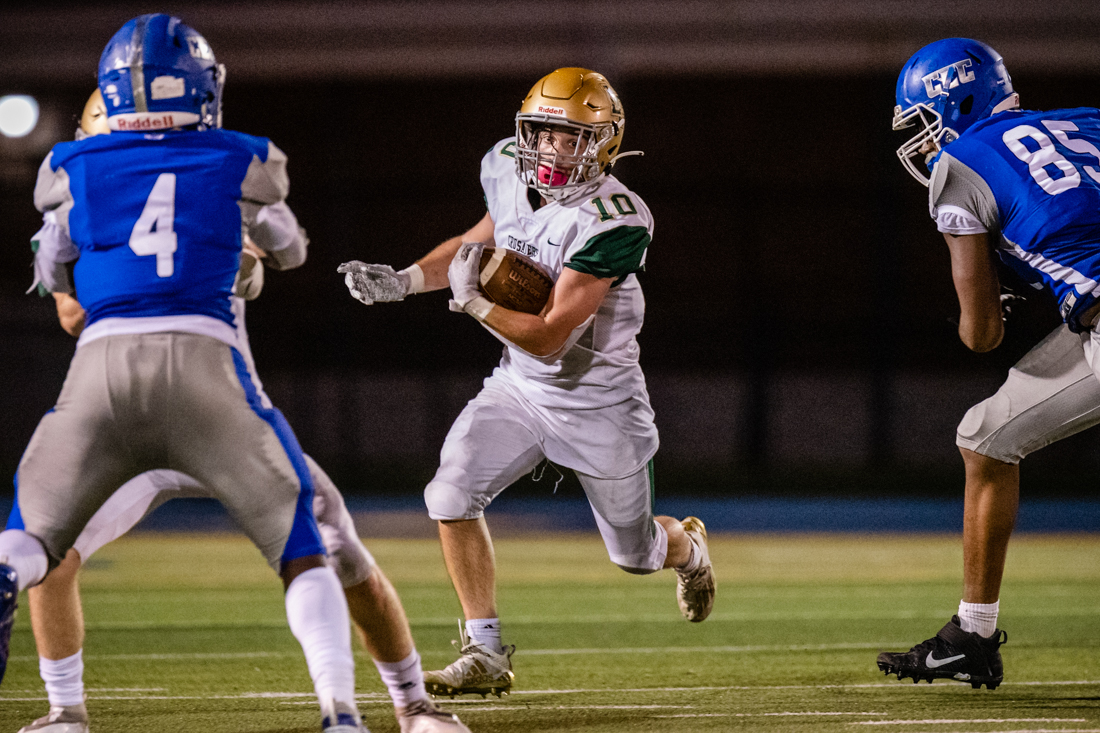 Lansdale Catholic's Josh Jackson (10) looks to break through a hole in the line against Conwell-Egan during their game on Friday, Oct. 23, 2020. (James Beaver/For MediaNews Group)

Pennridge has a chance to clinch the Suburban One League National Conference on Friday when Abington visits Helman Field for the regular-season finale.

The Rams come into the contest a perfect 4-0 in the conference while the Ghosts, 3-1 in the National, aim for a win and a share of the top spot.

“We have sights on bigger and better things this year because we know we can really go far. But we wanna go 1-0 this week. We don’t dwell on the past. We dwell on the future.”

In addition to conference glory, the Rams are also looking to solidify their positioning for the four-team District 1-6A Playoffs.

Croyle led a balanced attack for the Rams last week, showcasing his abilities with his arm and his legs.

The defense also had its third straight shutout and fourth of the season.

“The defense is amazing,” Croyle said. “It makes my job so much easier.”

The defense will look to limit the production of running back Oreck Frazier, who offers breakaway speed for the Ghosts, and quarterback Johnny Dzielawa, who leads a senior-dominated group.

Abington at Pennridge
Day/Time: Friday, 7 p.m., at Pennridge.
On Twitter: @khunter10.
Records: Pennridge is 4-0 overall and 4-0 in the SOL National. Abington is 3-1 overall and 3-1 in the SOL National.
Last Week: The Rams stayed perfect with their third straight shutout, 32-0 over CB South. The Ghosts won 35-14 over Pennsbury.
Players to Watch: Quarterback Bobby Croyle is now also a running threat for the Rams. Johnny Dzielawa provides tremendous senior leadership under center for the Ghosts.
Prediction: Pennridge 21, Abington 7.

Central Bucks East at Central Bucks West
Day/Time: Friday, 7 p.m., at CB West.
Records: The Patriots are 1-3 overall and 1-3 in the SOL National. The Bucks are 0-4 overall and 0-4 in the SOL National.
Last Week: CB West lost to Neshaminy, 21-0. CB East fell to North Penn, 42-7.
Players to Watch: Ethan Shine rushed for 101 yards last week for the Pats. Donte Mancini can pile up touchdowns in the ground game for the Bucks.
Prediction: CB West 28, CB East 21.

Souderton at Bensalem
Day/Time: Friday, 7 p.m., at Bensalem.
Records: Big Red is 4-0 overall and 4-0 in the SOL Continental. The Owls are 0-4 overall and 0-4 in the SOL Continental.
Last Week: Souderton blew past Hatboro-Horsham, 36-13. Bensalem fell to Quakertown, 52-7.
Players to Watch: Jalen White scored three rushing touchdowns last week for Big Red, which can clinch the conference title with a victory. Richard Deshield contributes at wide receiver and corner for the Owls.
Prediction: Souderton 35, Bensalem 14.

Plymouth Whitemarsh at Wissahickon
Day/Time: Friday, 7 p.m., at Wissahickon.
On Twitter: @emor09.
Records: The Trojans are 3-1 overall and 2-0 in the SOL American. The Colonials are 1-3 overall and 0-2 in the SOL American.
Last Week: Wiss won 20-13 in overtime over William Tennent. PW lost 63-35 to Upper Moreland.
Players to Watch: Jackson Intrieri had a pair of interceptions for the Wissahickon defense last week. Aiden O’Brien had 83 yards rushing against Upper Moreland for PW.
Prediction: Wissahickon 22, PW 12.

Pope John Paul II at Perkiomen Valley
Day/Time: Friday, 7 p.m., at Perk Valley.
Records: PJP is 2-0 overall and 1-0 in the PAC. Perk Valley is 4-1 overall and 4-1 in the PAC.
Last Week: PJP won 50-14 over Upper Merion. PV won 27-14 over Methacton.
Players to Watch: Golden Panthers quarterback Rocco DiRico was on point last week. Ethan Kohler did his part under center a week ago for the Vikes.
Prediction: Perk Valley 29, Pope John Paul II 22.

Roman Catholic at La Salle
Day/Time: Saturday, 1 p.m., at Wissahickon.
Records: The Explorers are 3-1 overall and 0-1 in the PCL Red. Roman Catholic is 0-2 overall and 0-1 in the PCL Red.
Last Week: La Salle was idle. Roman lost 28-7 to Archbishop Wood.
Players to Watch: Noah Kensey is a key part of the secondary for Roman. Sam Brown is a dangerous running and receiving threat for La Salle.
Prediction: La Salle 33, Roman 14.

Archbishop Wood vs. St. Joseph’s Prep
Day/Time: Saturday, 1 p.m., at William Tennent.
On Twitter: @khunter10.
Records: The Vikings are 2-0 overall and 1-0 in the PCL Red. St. Joe’s is 2-0 overall and 1-0 in the PCL Red.
Last Week: Wood defeated Roman Catholic 28-7. St. Joe’s was idle.
Players to Watch: Ryan Woertz is key on both sides of the ball for the Vikes, at free safety and wide receiver. Noble House is a big-play running back for the Hawks.
Prediction: St. Joe’s 28, Wood 14.

Lansdale Catholic at Bonner & Prendergast
Day/Time: Friday, 7 p.m., at Bonner.
Records: LC is 0-1 overall and 0-1 in the PCL Blue. Bonner is 2-0 overall and 1-0 in the PCL Blue.
Last Week: The Crusaders lost 21-14 to Conwell Egan. Bonner prevailed 42-7 over Ryan.
Players to Watch: L.J. Phillips was a threat with his arm and his legs last week for LC. Bonner’s Gaven Hunt brings speed to the running game.
Prediction: Lansdale Catholic 19, Bonner 14.