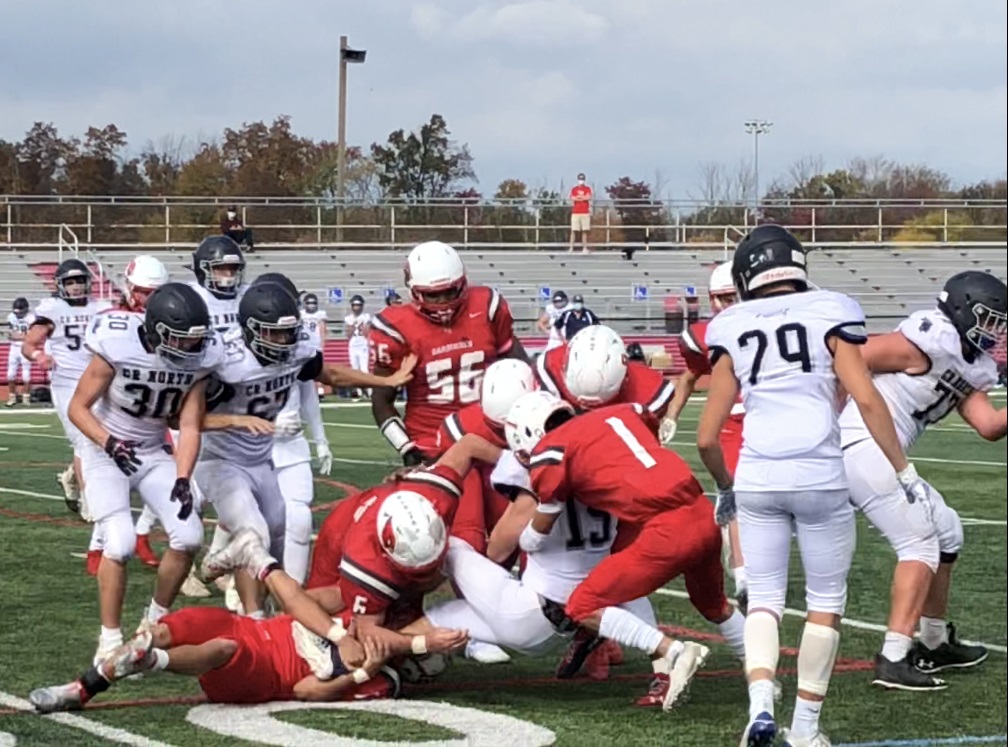 Forced to retreat to their den humbled and licking their wounds after last week’s loss at Souderton, the UD defenders were determined not to get shown up again when they took the field against Council Rock North. Preparation showed as the Cardinals’ first string defense didn’t allow a single point.

Spurred by the cats on defense, UD topped the Indians 21-6 Saturday afternoon.

“We’ve got a saying, ‘We’re cheetahs,’” Upper Dublin senior co-captain and defensive back Micah Bootman said. “It’s an ‘every man to the ball’ mentality, it’s a race. Everybody wants to make the tackle or lay the big hit and once the first guy gets there, the next guy is ripping because we’re trying to make plays.”

In total, Upper Dublin’s defense gave up 181 rushing yards and 55 passing yards on the afternoon. The first-teamers meanwhile, gave up just 22 in the air and 120 on the ground on 36 carries for a 3.33 yards per rush average.

With Council Rock North running a similar wing-T offense to the one Souderton used to gash the Cardinal defense last week, the starting defense knew a productive day meant stopping the run. To that end, the UD defensive line was on fire eating up blocks and getting a push up front while the linebackers and defensive backs, sorry, cheetahs, flew to the ball.

“It was our focus all week, man. We knew this coming in, we had the right game plan, it’s technically our second week running with the Wing-T and our coaching staff set us up for success,” senior Jacob Gondek, who filled in at nose tackle, said. “We had all the plays, knew exactly what to do and just executed.”

UD gave up a first down two plays into the game before the defense buckled down and forced a punt. The offense, which struggled for most of the day to establish a running game or manufacture long drives, cashed in when Colin O’Sullivan found a wide-open Bootman down the seam for a 51-yard touchdown.

That would be the only score of the day until the start of the fourth quarter, but it was enough for the Cardinals’ defense.

“Our defense can come on the field ready to play,” Bootman said. “We just look to make plays.”

CR North’s passing game was flustered all afternoon as well. The Cardinals didn’t record a sack but the cheetahs up front spent the game chasing Indians quarterback Michael Sylvester out of the pocket and the defensive backs broke up a number of passes, notably with Chris Kohlbrenner palming away a deep ball over the middle and Noah Lee laying the wood on a would-be receiver leading to a drop.

Gondek said the ability to create a push up front was again due to coaching and preparation. Cardinals defensive coordinator Dave Sowers spent the entire week getting his guys prepped and Bootman added there was a heavy dose of video study and Zoom calls setting the table.

With the front, which also included Kyree Butler, David Lashner and Nafis Blythe alongside Gondek, creating a consistent push, the linebacker trio of Cairns, Jacob Rossman and Nicholas Rodriguez could fly to the ball and drag down runners. Cairns, who was all over the field, said the line made his day that much easier by engorging itself with blockers and submitting the Indians backs to hits after minimal gains.

“Last week, it was just embarrassing for our defense to let up 28 points, that’s not us,” Cardinals linebacker Tristan Cairnes said. “We came out soft. Getting off the bus, we knew we weren’t going to play hard, so we had to show that we were better than that this week. We were well-prepared and did a good job on defense.”

Cardinals coach Bret Stover felt the defensive line’s play was a major factor in Saturday’s win and something that’s gone under the radar this fall. Even when big sophomore Riley Hackett had to leave the game early with an injury, Gondek took his place and helped keep the push going.

“Dave Sowers had our guys ready to go, we had some new people in due to injuries and those guys all played really well,” Stover said. “We preach to the guys up front we’re tired of the linebackers getting all the glory and they did exactly what we asked them to do and as a result, they were in the right spot to make plays.”

Stover credited Souderton for taking advantage of Upper Dublin’s mistakes last week but he also felt the loss was a good experience for his team. The defense saw the kind of level it would have to play at to beat a quality opponent that had some bigger, stronger and older players and it stuck with his team.

Upper Dublin finally established a run game by using its goal line package and it helped the Cardinals put two scores up in the fourth quarter. John Kohlbrenner ripped off a 23-yard run late in the third that led to a one-yard touchdown plunge by Rossman on the first play of the fourth quarter.

At one point, Bootman emphasized to his teammates on defense that the second man in on a tackle had to start ripping at the ball. Chris Kohlbrenner clearly heard the message, as he was able to dislodge the ball from a stood-up runner then dive on the fumble for a turnover in CR North territory with nine minutes to go.

Michael Wright, who picked up 29 of the final 30 yards on the drive, cashed in the turnover when he powered in from three yards out for a 21-0 lead and three minutes left on the clock.

“It’s high-energy, we all get pumped up from that,” Gondek said. “That’s our plan and we did exactly what we had to do. We had a chip on shoulder coming into this game and I think it showed.”

CR North got on the board when Sylvester found Ryan McCaffery for a 33-yard touchdown pass on the final drive of the game with UD’s second string defense in. McCaffery had a nice game for the Indians, picking off a pair of passes on defense to go with his TD grab.

The Cardinals will finish their regular season next week with a home game against Hatboro-Horsham.

“We feel good, we’re very confident now and we think our defense is back,” Cairns said. “Now we have to put in the time on film the same as we did last week, come out and execute and if we do that, I think we’ll be fine.”