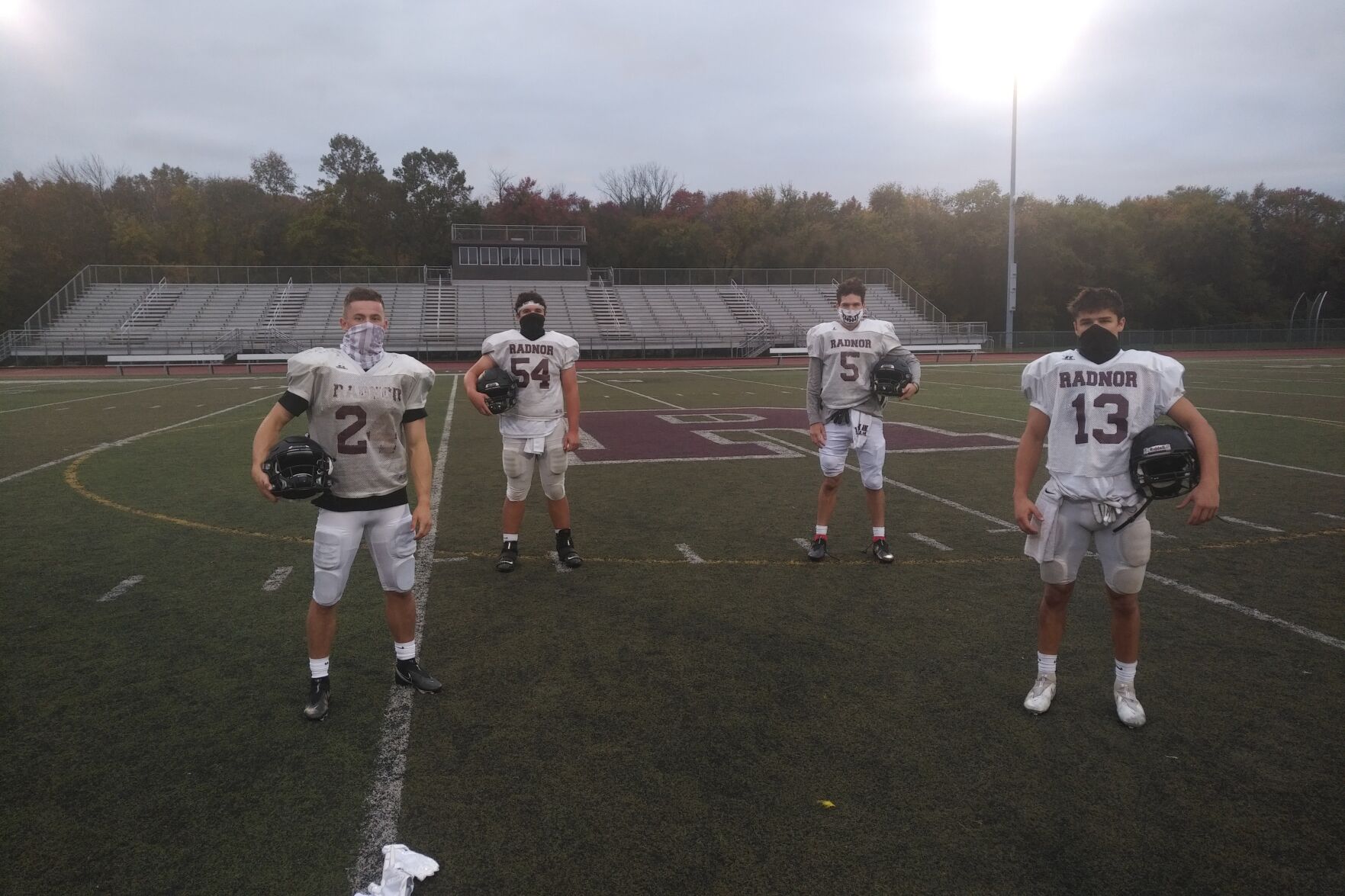 Looking for a better season with a bevy of returning starters at Radnor are team captains (left to right), Scott Belveal, Duncan McDermott, Reece Evans and Mark McKeon. (MNG photo)

The second time, that vision became more clear. Same with the day the Raiders allowed six points, the night they allowed seven, and even that time they lost, permitting just 10.

That dream: A 2020 defense capable of anything, including a Central League championship push.

“Nine starters back,” Ryan said after a recent practice at Prevost Field. “I’ve had some good defenses over the years. But this is the most returning starters I have had back in recent memory. It’s nice that you don’t really have to get too in depth with the teaching, because the guys have heard it for the last two or three years.”

In what will be an abbreviated Central League season and a year without a postseason, quick starts and minimal stumbles will be mandatory. For that, a defense returning virtually en masse and integrated with an 18-player senior class should make Radnor ready early.

“Wrestling definitely helped me a lot in football, because last year I wasn’t as fast and as low as I am this year,” Jerome said. “We can play hard and fast, get to the ball, gang tackle, all that stuff. I’ve seen a lot from this defense already. We always work hard. We are running all the time in drills. I am looking forward to it.”

While the Raiders often dominated defensively last season, they had moments of inconsistency and went 5-6 overall, 4-7 in the Central. Yet as they return, they are deep in experience and offensive versatility. As the extended training camp jabbed into mid-October, Ryan was still trying to dig through a four-deep chart to choose a quarterback, with seniors Thomas Hannum and J.P. Moreland the front-runners and junior Jude Wallin and freshman Tucker Graham in the mix.

“That’s a good thing for a coach to have,” Ryan said. “So we’re excited about that.”

The offensive line will benefit from the experience of 240-pound Duncan McDermott at center. Dixon is a returning All-Delco receiver. Reece Evans and McKeon are also expected to contribute heavily to the offense, with Belveal back to provide the bulk of the ball-carrying.

“We have a lot of weapons,” said Belveal, who will join McKeon, Evans and McDermott as a captain. “We just hope to make something happen this year. We are very excited. There’s not a lot of room for error this year, but we’re hoping we’ll get it done. We’re excited, and we are ready to go.”

Entering his 14th season at Radnor, Ryan has a second consecutive deep senior class, evidence that his eight-year effort to develop a robust feeder program is working.

“We had the gift from the school board that we have the opportunity to play,” Ryan said. “When we got the green light, our kids were beyond thrilled, especially the 18 seniors. They were ready to go.”

Just as he expected they would be, as far back as a year ago.