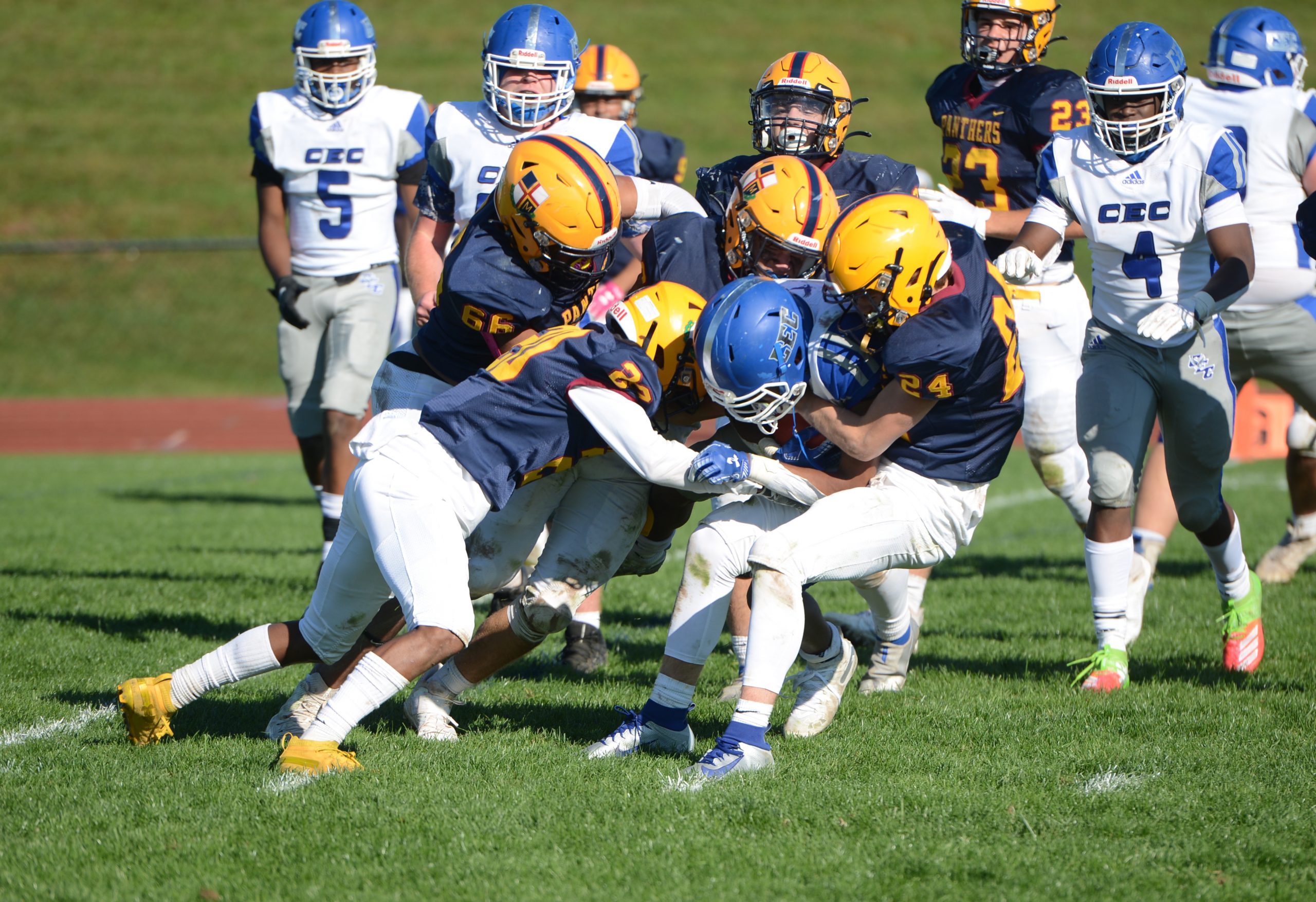 UPPER PROVIDENCE >> A “get well soon” gift for Rory Graver?

More like a “hanging in there, coach” gesture by Pope John Paul II.

The Golden Panthers started their abbreviated 2020 game schedule Saturday with their boss not physically in attendance. A coronavirus situation had Graver self-quarantining since the previous week, and their planned Oct. 9 opener with Pottsgrove postponed.

Rocco DiRico finds Kese Williams on 4th down to put PJP up 26-13 with 4:16 to play. pic.twitter.com/YSDySvP0As

Thanks to Zoom technology, however, Graver was able — albeit remotely — to be part of the action. And thanks to his players’ inspired play and his coaching staff’s inspired leadership, PJP achieved a happy outcome to its lid-lifter against Conwell-Egan.

With Rocco DiRico throwing three successive touchdown passes, and the defense making timely plays on the other side of the ball, PJP rolled up a 32-19 victory on the Eagles. It was a game which, in this time when the unusual has become the “usual,” the status of the game wasn’t affirmed until midweek. But to its credit, the team rose to the occasion on short notice.

“We didn’t get much preparation,” DiRico said. “We only had two weeks and one scrimmage. I’m proud of our performance … we did a lot of work.”

The Panther junior, taking over the offense with the graduation of Kamal Gray from last year’s District 1-3A championship team, tossed for 109 yards and four touchdown, spreading his TD tosses around to four different players.

Brendan Kenning, Steele DePetrillo and Justin Kormos were part of PJP scoring 20 unanswered points through the second and third quarters, and Kese Williams hauled in another for breathing room after the Eagles closed the deficit to 20-13 at the start of the fourth.

“Conwell-Egan has a really big line,” DiRico said, “so we stayed low, We were happy with what came to us.”

The running game helped the Panthers nail down the win over the game’s final nine minutes and change. Josh Little, who chalked up the overwhelming majority of his yards in the second half, sprinted 30 yards around his left tackle to stake the home team to its final victory margin with 3:35 left.

“We had to keep pushing up front,” the senior running back, who got the bulk of the action on the previous series capped by the DiRico-to-Williams scoring toss, said following his 82-yard day. “They have a lot bigger guys.”

The ground game was bolstered by Chris Bruder (49 first-half yards) in the early going, and from start to finish by a line getting ample leadership from a trio of seniors: Jacob Foley, Julian Paskel and Ambrose Colliluori.

“We know we’ll go as far as those guys take us,” Little said.

“We showed up against a team that’s bigger and faster,” Colliluori added.

The PJP defense distinguished itself in a big way, winning the turnover and quarter-back pressure battle. D.J. Clarke, Little and Joe Pickell all had interceptions of CE’s Dante Moriis while R.J. Rippert and Colliluori recovered fumbles. Jacob Dobrowolski, Paskel and Brendan Kenning scored sacks to keep Morris and the Eagle offense scrambling.

Three of the turnovers — Clarke’s interception and the recovered fumbles — set Pope John Paul II up for scores. Pickell’s pick, in turn, abruptly halted Conwell-Egan’s last possession at its 21 with 18 seconds left.

It all made life easier for the Panther coaches … particularly assistant Adam Beach, who led the team on the field in Graver’s physical absence. Beach, who had previous head-coaching experience at Upper Moreland, credited staffers Tony Yerger and Matt Bildstein with facilitating his task.

“They handled the offense and defense,” Beach said. “That left me to run the team and deal with special teams.

“The kids deserve the credit,” he added. “The seniors provided leadership and focus on the job they did this week.”

The Eagles got their scoring on the ground: Morris with a one-yard run late in the third quarter, Colin Majors with a 38-yard burst around his left end as time expired in the third and Khian’Dre Harris with a four-yard run around his right end with 1:22 left in the game.

Harris was the workhorse of the CE offense, carrying the ball 12 times for 32 yards and collecting another 27 off six receptions; he also made a 33-yard flea-flicker pass to Andrew Garwo on the visitors’ final scoring series. In the passing game, Morris was 7-for-14 for 73 yards.

NOTES >> Beach noted the team didn’t get confirmation Saturday’s game was on until Wednesday. “That was a test of internal fortitude for the kids,” he said. … It was also noted Graver was Zoomed in on team practice during the week. “It was a good job using technology,” he said. … While PJP averaged 30 yards a try on its four punts, Conwell-Egan didn’t register one punt the entire game.

Rocco DiRico rolls out and finds Steele DePetrillo for a TD pass. 14-0 PJP with 7:39 left in Q3. pic.twitter.com/7SNCftc0h0