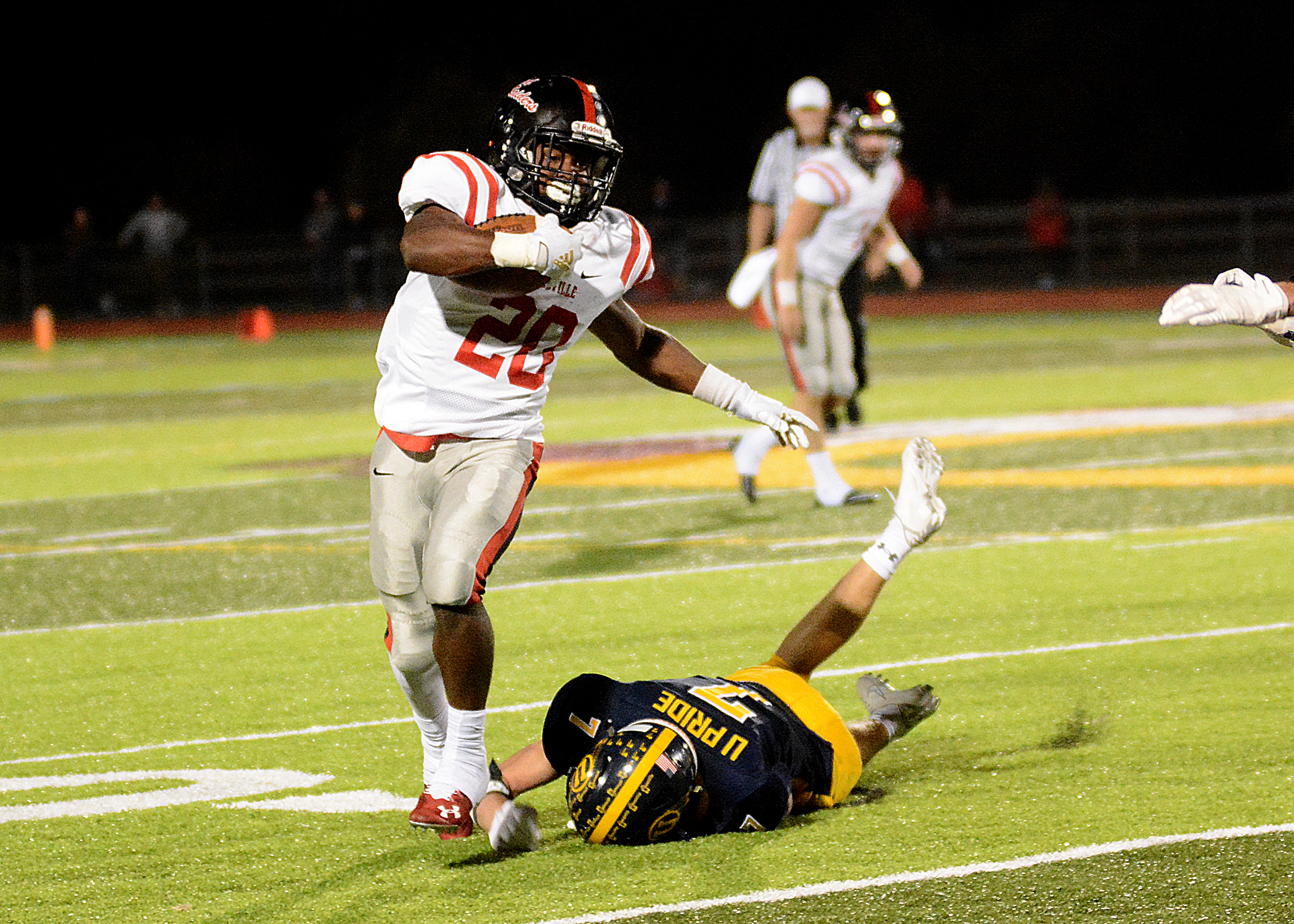 CALN >> The past four seasons of Coatesville High School football were all about prolific scoring. The Red Raiders averaged more than 45 points per game during that span, with a lot of quick, long strikes from the offense.

Saturday night at Red Raider Stadium, there was a new Coatesville on display. A team that can grind out games and win with defense and a strong running game.

The result was the same as it ever was, as the Red Raiders wore down Downingtown West, 22-14.

Coatesville (2-0) amassed 308 yards on the ground against the Whippet (0-1) defense. Sophomore quarterback Harrison Susi ran for 145 yards and two scores and Dametrius McClain-Jackson garnered 83 yards and a touchdown. Ashon Wesley chipped in with 73 yards as the Red Raiders’ offensive line took over the game in the deciding second half, while the defense stymied the West offense at every turn, limiting the Whippets to just two second half first downs and only eight for the game.

“We have been waiting for this game with them since they beat us in the district championship,” said Coatesville senior lineman Jake Walton. “This game was personal for us and we had a little extra motivation for it. We knew they did not have any depth and they used a lot of guys both ways, so we decided to run right at them. We did not do a good job in the first half but in the second half we started to impose our will on them and they were beat.”

Downingtown West (0-1) — playing its first game of the year after taking 14 days off due to a positive COVID-19 test — forged a hard fought 14-7 lead at halftime as the Whippets got a 40-yard touchdown pass on a blown coverage as junior quarterback Evan Wickersham hit Elijah Ford, and the Whippets went into the locker room with a seven-point lead.

But, the Coatesville defense took the game over in the third quarter. The Red Raider defense forced three and outs on five consecutive Downingtown West possessions. The Whippets ended up punting the football eight times on the night and nothing Downingtown West did offensively in the second half clicked. The Whippets were held to just 159 yards of total yards on the night.

And it was the punting game that played a very big part in the game in the third quarter. With the Whippets in punt formation, a high snap went over the Whippet punter’s head and ended up out of the end zone for a safety, allowing Coatesville to draw closer at 14-9, late in the third period.

Downingtown West then kicked off to the Red Raiders and Coatesville’s Abdul Sabur-Stewart took the free kick down the right sideline for a big return. Add on a late hit call on the Whippets, and Coatesville was in business at the West 28-yard line.

Four straight punishing carries from McClain-Jackson brought the ball to the Downingtown West 1-yard line, and two plays later, Susi went in from a yard out to give Coatesville a 22-14 lead.

Downingtown West had one last chance at tying the game, with the ball at its own 43-yard line with 44 seconds to play in the game. But the Coatesville defense sacked Wickersham, one of three sacks on the night, and the Red Raiders had their revenge.

“We knew coming in they had a lot of two-way players,” said Coatesville head coach Matt Ortega. “And we played to the strength of our team and we feel that is our defense. We challenged the kids and they really came through tonight. And to all the high school football players out there they deserve a ton of credit to go through everything we have had to go through.

“And these kids came in and did this for each other and for the community,” Ortega said. “Just having the chance to play a football game is special and tonight was a celebration of that.”