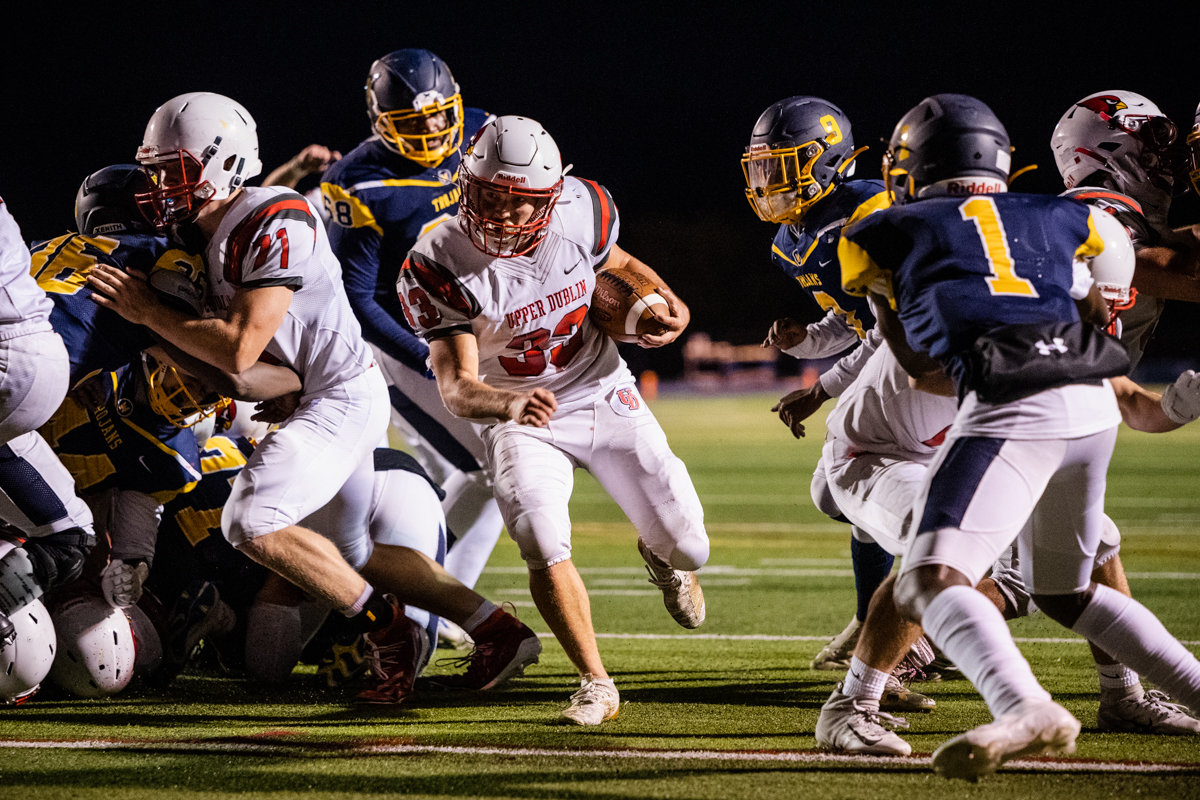 LOWER GWYNEDD >> Coming into the season, Upper Dublin head coach Bret Stover knew his team would rely on senior captains Micah Bootman, John Kohlbrenner and Jacob Rossman and it was evident in the first game.

All three scored touchdowns and made key plays in a 31-27 win over Wissahickon in the season opener Friday night.

“The experience helps a lot with practice and getting the younger guys ready to play,” Kohlbrenner said of the senior trio. “We had a couple freshman play today, so us coaching them makes them a lot better.”

Bootman got everything started. Just three minutes into the game, he grabbed an interception at his own 25-yard line and weaved his way down the sideline for a 75-yard touchdown.

Wissahickon’s Marice Johnson Jr. (21) is upended in the opening kickoff of the game against Upper Dublin on Friday Oct. 2, 2020. (James Beaver/For MediaNews Group)

After Wissahickon tied the game, Kohlbrenner returned the ensuing kickoff inside Wissahickon’s 40-yard line. Seven plays later, Jacob Rossman scored from 12 yards away to give the Cardinals a 14-7 lead late in the first quarter.

On the next possession, Rossman grabbed an interception to set up the Upper Dublin offense at the Wissahickon 24-yard line. Five plays later, Kohlbrenner was in the end zone celebrating a three-yard touchdown run with his side ahead, 21-7, with 10:39 remaining in the second quarter.

The Cardinals got a boost from their special teams Friday night.

Kicker Owen Carl went 4-for-4 on extra points and made a 27-yard field goal.

In addition to his long kickoff return to set up a touchdown in the first quarter, Kohlbrenner tackled Wissahickon’s punter on a fourth down in the second quarter to give Upper Dublin great field position.

“Ever since sophomore special teams has been one of my favorite things,” Kohlbrenner said. “Just going at the punter – we always have a good scheme set up by coach Roberts. We get a block at the 15 or 20 – that can be a game-changer.”

At the end of the game, the Cardinals hands team recovered a pair of onsides kicks to help hold off Wissahickon’s late rally.

The Trojans played a strong second half to get within four points when the final buzzer sounded.

They held Upper Dublin to zero first downs in the third quarter and the only touchdown they allowed in the fourth came when the Cardinals started a drive on the offensive 35-yard line.

“Defensively we’re playing better,” Fleming said. “We have to find some more guys to give our guys who are playing both ways a little more time to rest up so they’re fresher for the duration of the game.”

Trojans running back Kyle Lehman ran for the second of his two touchdowns in the third quarter while Jeremiah Clark and EJ Schreiner each scored in the fourth.

Schreiner hauled in five passes from quarterback Aidan Defeo for 71 yards and a touchdown – an acrobatic 41-yard grab in the final minute of the game. When Defeo was shaken up for a couple of plays in the fourth quarter, Schreiner stepped in at quarterback and completed a 10-yard pass.

“Since EJ came up as a sophomore to the varsity program I’ve always looked at him as an athlete that can do multiple things for us and finds ways to showcase his ability,” Fleming said. “That’s one of the reasons I love having EJ be a part of this team – whenever we’re in a pinch we know we can go to him in different areas.”

“On Twitter you get to talking to coaches all across the country,” Fleming said. “When the George Floyd stuff happened over the summer one coach in Florida designed the shirt and put it out on Twitter to see how many other coaches are willing to wear this shirt in a game and support being a part of being a change in our society. As a football team, that’s the best place to see society – you have a mixture of all different types of guys on the team. That way we’re able to talk to each other and form a brotherhood and learn how to love each other regardless of our differences. As coaches, that’s the point of us being Coaches for Change.”