Spring-Ford runs away from Boyertown, 49-13 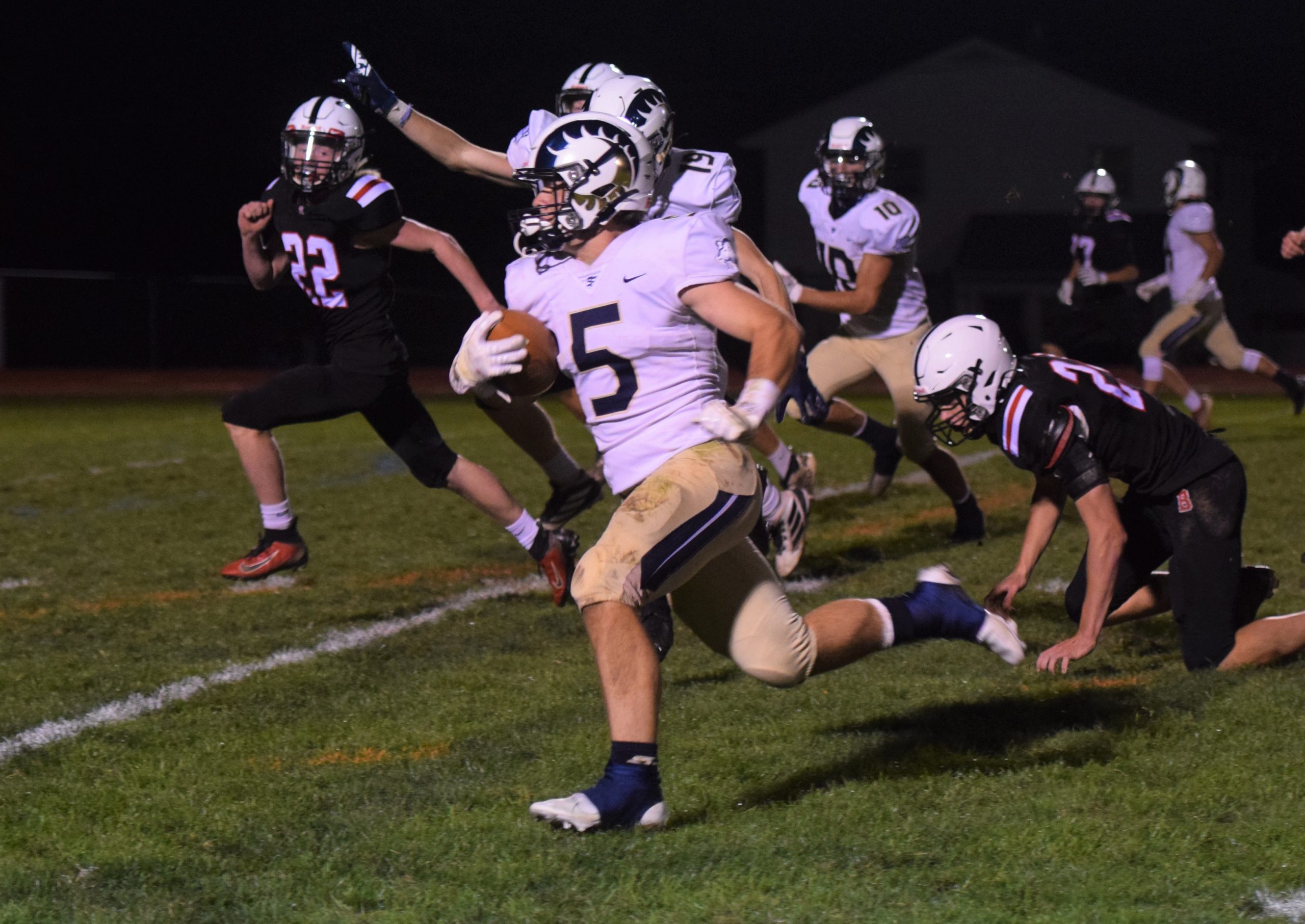 Spring-Ford's Nick Teets rushes toward the end zone for a touchdown late in the second quarter against Boyertown. (Austin Hertzog - MediaNews Group)

BOYERTOWN >> Over the years, Spring-Ford has been synonymous with straight-ahead, hard-charging, ground-pounding offense.

As demonstrated Friday when they visited Boyertown, the Rams have a wide assortment of players who can contribute to the maintenance of that persona.

With no less than a dozen of them getting touches — many of them with major production — the Rams rolled Boyertown 49-13 … and it ended up not being even that close.

Spring-Ford (2-0) put the second-half “running clock” into effect by scoring five first-half touchdowns for a 35-0 lead. Four of them were scored by three different players on running plays; the other was a credit to heads-up play on special teams, a blocked punt returned for a touchdown.

“One of the things we try to do is give other teams different looks,” Ram head coach Chad Brubaker said. “We try to diversify our offense, and we have guys with the ability to give the different looks.”

The offense also featured a pair of touchdown tosses over the game’s final eight minutes, one by starting quarterback Ryan Freed and the other by junior Kyle Keckler. But the ground-pounders — nine of them — set an indelible tone for the game.

“That was our goal coming in, to get everyone touches,” Nick Teets, whose short night of one-half’s action featured two rushing touchdowns and more than 100 yards’ total offense, said. “We’ve got a lot of good skills … we’re not one-dimensional. We ran against Perkiomen Valley (Sept. 25) with that identity.”

Boyertown (0-2) cut into the Rams’ big lead by scoring on successive possessions covering a span of little more than seven minutes. It proved a brief respite, however, as Spring-Ford used its air game to get its lead back to the 35 range.

“That’s a very good Spring-Ford team,” Boyertown head coach T.J. Miller noted. “We made stupid mistakes early, and that’s how you get from good to bad.”

On a night when the momentum and statistics were solidly in the Rams’ favor, Miller was cheered to a degree by his team’s response to the tough go it faced.

“Our offensive line … when you’re down 35-0, you could just play out the running clock,” he said. “But they kept going. Our defense went the whole game working out of our red zone. We’re young, but we fought.”

Spring-Ford got its roll toward a second-half “running clock” started on its second series, one secured by Napthali Stine’s recovery of a fumble at the Boyertown 7. Harry Adiefeyeh went two yards through his left tackle to score four plays later, with 8:05 left in the quarter.

The Rams expanded their advantage when Andrew Yoon scored from five yards with 7:08 left in the half. Less than five minutes later, Teets upped Spring-Ford’s lead to 21 points with an eight-yard scamper around his right end.

The visitors’ special teams then got in the scoring act. Josh Pergine blocked a Bears’ punt from the Boyertown 20, and Cam Goldsmith took the recovery to the end zone at the 2:11 mark.

Spring-Ford got one more TD in nine seconds before the half, Teets roaring 39 yards through his right tackle.

“On that play, I asked our linemen what they wanted to run,” he said. “They decided on that play.”

Spring-Ford’s Cam Goldsmith does a flip into the end zone after recovering a blocked punt and running it back for a touchdown against Boyertown. (Austin Hertzog – MediaNews Group)

Boyertown finally got on the scoreboard in the third quarter, scoring on successive possessions. Luke Ordway hauled in a four-yard pass from Noah Segal with 4:13 left in the quarter, and Leo Egbe (14 carries, 62 yards) followed with a seven-yard scoring run at the game’s 9:03 mark.

“Ordway is becoming the deep threat we knew he could be,” Miller said.

And of one four-yard carry where Egbe pushed a pile of teammates and opponents toward the end zone, the coach described it as characteristic of “Boyertown football.”

The Rams were not finished, though. Freed’s TD toss to Joe Brogan, a 50-yard strike with 8:34 to go, was the game’s longest pass completion. And Keckler’s 43-yard pass to Payton West, coming with little more than a minute left, wasn’t far off that mark.

Boyertown lineman Cody Akins (50) celebrates after giving Leo Egbe (2) an extra push to get into the end zone for a touchdown in the second half against Spring-Ford. (Austin Hertzog – MediaNews Group)

NOTES >> Alex Nadeau was 7-for-7 in conversion kicks for Spring-Ford. … Like Teets, Yoon got his night’s work (67 yards on seven carries) done in the first half. … Segal finished as Boyertown’s rushing leader, collecting 67 yards on 14 carries. … The Rams saw one scoring attempt go for naught late in the first quarter, missing a 37-yard field goal try.

Interceptions – None.
Sacks – None.