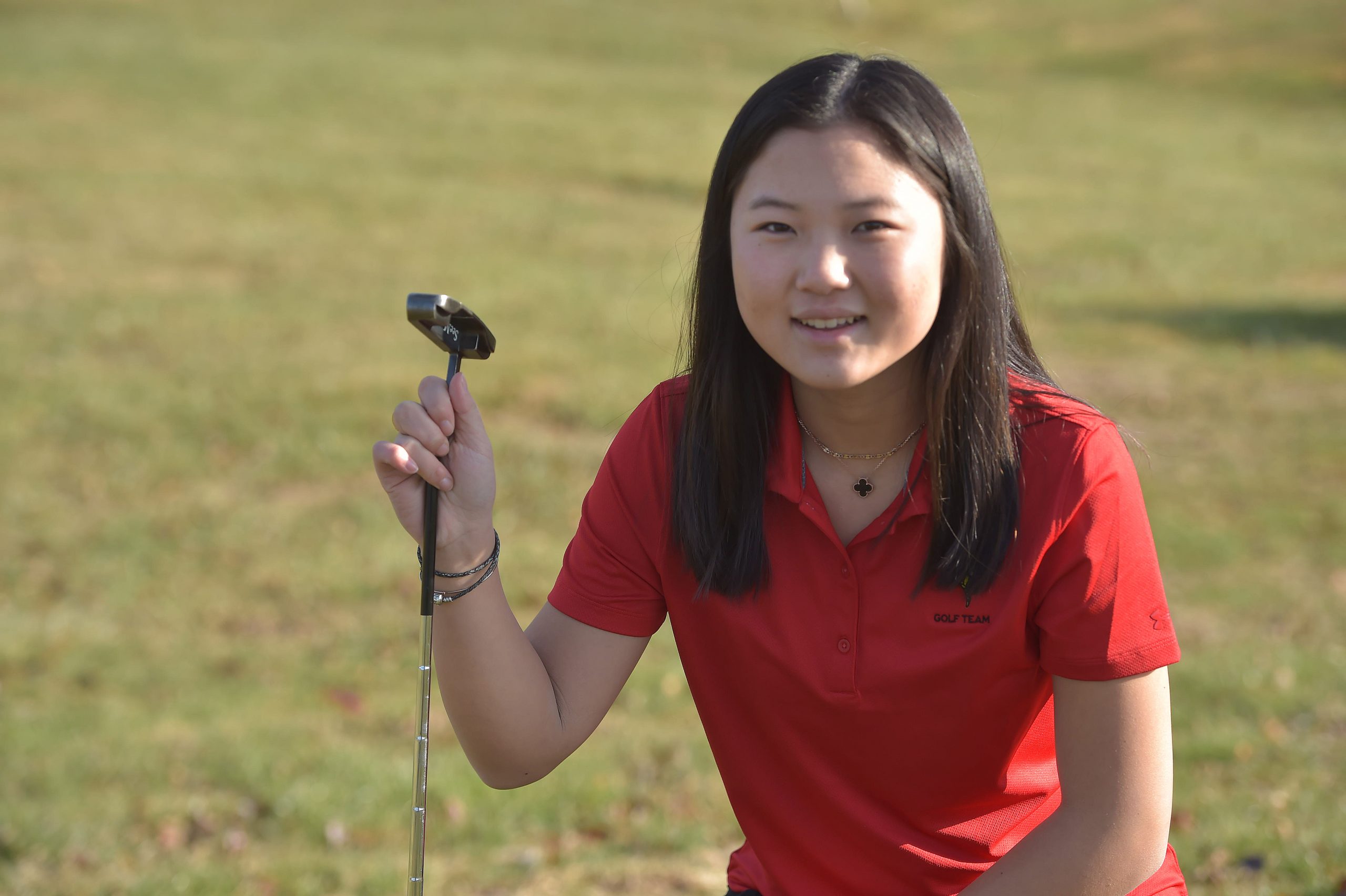 The Chester County high school golf scene this fall features a true bumper crop of returning stars, including the both 2019 Daily Local News Golfers of the Year, Conestoga senior Morgan Lofland (boys) and West Chester East junior Victoria Kim (girls), plus all but one of the 10 golfers who were named to the Daily Local News All-Area first team last fall.

Lofland, who has committed to Penn State for golf, had a memorable fall season last year. In the PIAA East Regional tournament, Lofland played the final seven holes in five-under-par to cruise home with a 67 and a first-place finish; then in the PIAA Class AAA state tourney, he began the first round with back-to-back birdies, finishing in ninth place and winning a state medal.

Lofland also had a red-hot summer on the links, winning several events and shooting six under par more than once in competition. He also set the course record at Phoenixville Country Club with a 59.

“Morgan is the complete package – a student of the game who outworks his competition with his unmatched work ethic and laser focus,” said Conestoga golf coach John Jones. “He is an absolute fierce competitor – never count Morgan out, he battles every time he is on the course and always believes he can win.”

The 6-foot-9 Walz, a first team All-Central League golfer last fall, is a three-sport athlete at Conestoga (basketball, baseball), and consistently had one of the top scoring averages in the Central League, including a 3-under-par 32 at St. Davids.

“Michael is a highly skilled athlete and has high expectations for himself on the golf course,” said Jones. “His size and length can be intimidating to opponents.  Michael is a big hitter who has great hands and short game to go along with his impressive distance.”

The West Chester Rustin junior duo of Eric Miller and Ryan Dariano tied for third place at the Ches-Mont championships last fall, and Dariano went on to finish seventh at the PIAA Class AAA District 1 championships.

“Eric has been playing a lot this summer so he will be a big part of our success,” said West Chester Rustin golf coach Joe Paris. “He and Ryan are D1 players in my opinion. Ryan and Eric should be state contenders.”

“Ryan’s leadership on the course is what our guys look to during the season,” said Devon Prep golf coach Tony Ball. “He has played a lot of tournaments up and down the East Coast, gaining a lot of experience along the way.”

On the girls’ side, the leading returnee is West Chester East’s Victoria Kim, who had an electric sophomore season last fall. She finished second at the PIAA state golf championships after getting into a three-way playoff with some clutch shots on the final holes, and won her second consecutive Ches-Mont Tournament title despite being involved in a car accident earlier in the morning.

“Victoria’s talent, mental focus, and consistency have produced a record that speaks for itself,” said West Chester East golf coach Todd Lorback. “As a coach sometimes you are just left to observe, ‘I’m sure glad she is on our team.’”

O’Sullivan finished 14th at States, tied for sixth at Regionals, was ninth at Districts and third at the Ches-Mont Championships last fall. A first team All-Ches-Mont golfer, she averaged 39.5 strokes per nine holes.

Downingtown East girls golf coach Matt Grinwis said, “Each year, Ava gains maturity, strength and experience.  Her dedication and desire for continuous improvement is why she is drawing interest from D1 and D2 schools.”

Dunigan finished fifth in the PIAA Class AAA state tournament as a freshman last fall, tied for third at East Regionals, placed eighth at District 1 championships, and was second at the Ches-Mont Golf Championships to Victoria Kim.

Here’s a look at area high school golf teams, based on information provided to the Daily Local News by the respective teams:

Avon Grove (girls) will be led by junior Cecily Eason, who was an All-Ches-Mont honorable mention golfer last fall.

“Cecily is a very hard-working experienced golfer,” said AG girls golf coach Clayton Harwick. “Playing at Radley Run multiple times a week during the summer has prepared her for the upcoming golf season and it has shown.”

The Avon Grove boys will be led by Tyler Wiercinski and Philip Travaglini.

“Tyler is our leader, and his smart golf game along with his confidence will help drive us this year,” said Avon Grove boys golf coach Bart O’Connor. “Phil has improved so many facets of his game over his time at AG and works really hard – he is constantly practicing.”

Conestoga’s top golfers, along with Morgan Lofland and Michael Walz, include sophomore Kyle Mauro, who competed on the varsity team as a freshman last fall. Also expected to make valuable contributions for the Pioneers this year are senior Graham Blatchford, senior Jack Pugliese, junior Matthew Loftus and freshman Sachin Blake.

Devon Prep standouts include Ryan McCabe and junior Graham White. Tide head coach Tony Ball said, “Graham has been a steady player for the past two years and is a great teammate and player to coach. He takes his classes and golf seriously and is always working to get better.”

“Mia will add depth at the top of our lineup,” said Grinwis. “She is a hard worker with a solid all-around game and a whole lot of upside. Isabella has shown steady improvement every year and I am confident she will play well for us this season.

“Ava Lichok lost a few weeks of practice this summer due to injury but is back and ready to build off her strong performance at last year’s Ches-Mont tournament. Silvana worked endlessly on her game all spring and summer and has greatly improved from last year. Maria is a strong swinger of the club who continues to get better as she learns to harness that strength and gain consistency.”

“Dylan has been a team member for three years, has competed well in local tournaments this summer, and is very focused and consistent,” said D-East boys golf coach Scott Yard. “Jake competed in many Philadelphia Junior Tour events and is stronger and wiser than last year.  I expect Jake to make States this year. Andrew is a talented athlete that, if focused, can shoot in the 70s.”

Downingtown West (boys) features freshman Nick Gross, who is ranked among the top golfers in the nation for his class. However, he won’t be able to make the 2020 postseason competition past Districts, as he has other tournament commitments during PIAA Regionals and States.

West Chester East golf coach Todd Lorback said, “We have a solid and experienced group of golfers with a strong junior class returning to compete this year.”

Those juniors include not only Victoria Kim, but Aaron Stypulkowski (first team All-Ches-Mont and second team DLN all-area last fall), Kane Gallagher and Frankie Sass, along with senior Jack Sehon.

“Aaron came into his own last season; he’s an intelligent and knowledgeable player who loves to play and translates that joy from the game into steady improvement,” said Lorback. “Jack has continued to improve his game over the last two years, changing his swing last spring to improve his distance and consistency off of the tee.

“Kane has good athletic ability and has worked on his game, shooting in the upper 70’s several times this summer.  Frankie is another hungry returning player who has put a lot into improving his game over the last two years.”

“Sean is a great scorer and has a lot of mental focus – he will definitely be someone to look out for by his senior year,” said Henderson head coach Joel Cummings. “Josh is already scoring better than most golfers in the Ches-Mont. He may look small but he is a big hitter, and he is very smart when it comes to the game of golf.”

“This is going to be a very good team,” said Rustin golf coach Joe Paris. “Mary Emma just won the junior club championship at Radley Run, and will be a very solid player for us. Nick Meisnger was injured last year – he will challenge for the 3 or 4 spot on the team. Kevin Hudak and Trevor Telerico will be in the middle of the lineup. I think Connor will take over the 3 spot in the lineup.”