TCA tops Devon Prep on soccer field, but victory is for both teams 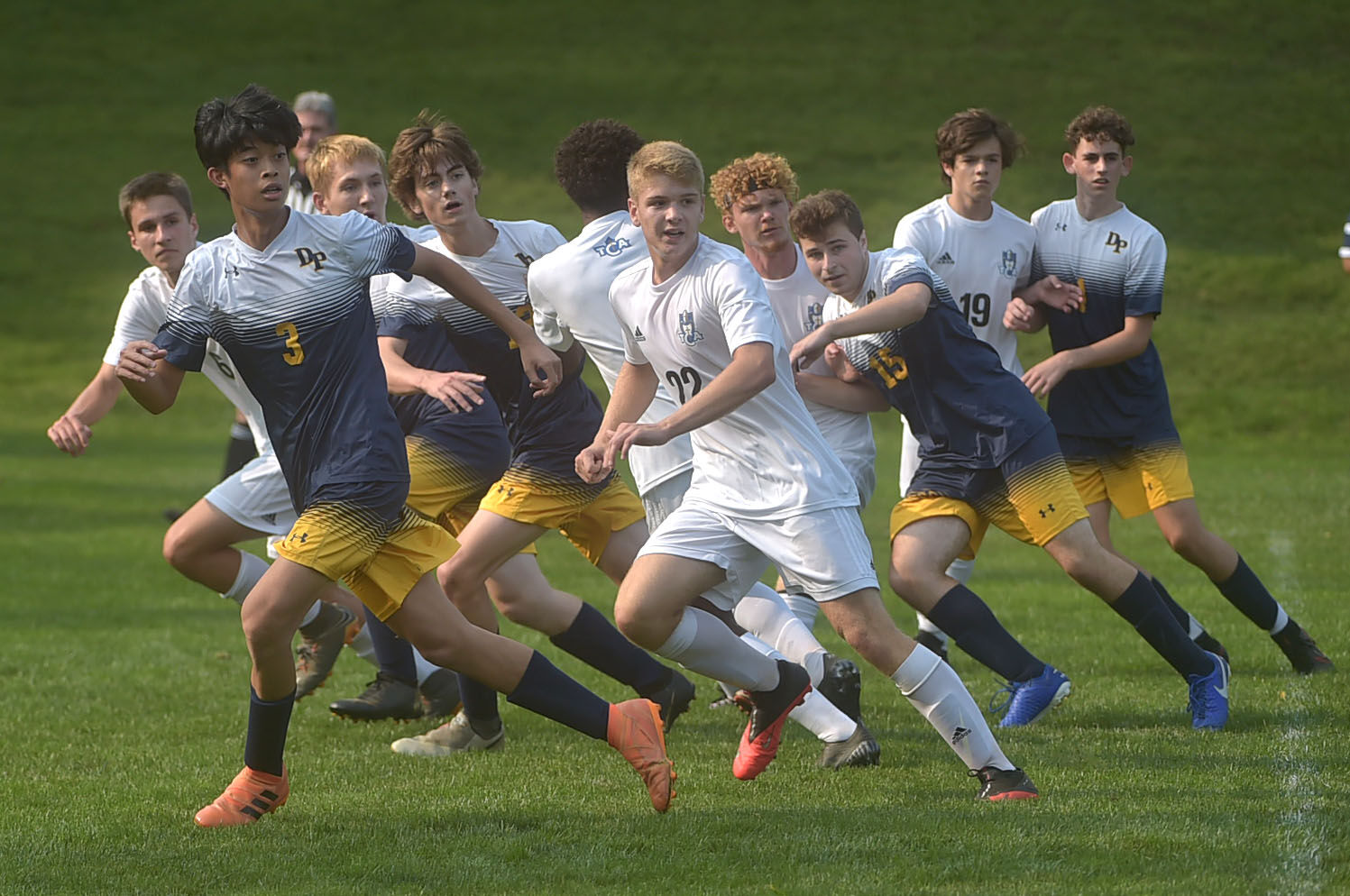 TREDYFFRIN — The soccer practices that Tim Lazorka ran this summer took on new dimensions, so it only stood to reason that the first game would, too.

Lazorka’s practices in his second season at Devon Prep would’ve seemed foreign when he was hired. Instead of two solid hours of drills and tactics, a significant portion is dedicated to what once seemed silly: Where to put bags, how far apart to stretch, water-break procedure, how to huddle and celebrate.

So Wednesday, before Devon Prep took on The Christian Academy for both teams’ first game of 2020, the team talk had to change, too.

“I said to the guys at the beginning of the game, ‘Just look at it. We’re out here in uniform. Just take a look back at March to think if we would be out here, at school, around each other, socially distant, of course,’” Lazorka said. “Just having the opportunity to come out here and compete, we’re very fortunate for that.”

That word, fortunate, was a common refrain after TCA’s 3-0 win. The schools are two of a fleeting few in Southeastern Pa. – and TCA, with Delco Christian and Sacred Heart Academy, is one of only three in Delaware County – proceeding with fall sports during the COVID-19 pandemic. It came dressed in new procedures: Bench players clad in masks, face shields strewn about the shoes and backpacks on the Devon sideline, the command “grab your masks” appended to “grab a drink” before the (more loosely constructed) halftime huddle.

But the soccer side felt normal in a time when so little does.

Both teams had to break the prevailing trend in the area to play. The Bicentennial Athletic League left decisions up to the schools, according to long-time TCA athletic director Rod Haseltine. Befitting the spirit of the PIAA ruling, which offered local control, the BAL allowed schools to determine their fall participation. It was a pragmatic decision, with membership from all four suburban counties plus Philadelphia, not to mention public, private and charter members. The piecemeal approach differed from leagues like the Central and Ches-Mont, which elected to postpone en masse.

Several schools, Haseltine said, opted out, including charters that shifted all learning online and some in Philadelphia. But the Crusaders have filled a 10-game schedule against Phil-Mont Christian, Faith Christian, Plumstead Christian, Delco Christian and Dock Mennonite.

It’s fluid and day-to-day, Haseltine said. But it’s something.

“I think the PIAA has done a really good job of trying to get the players to play,” Haseltine said. “I think they understand the importance of it, and (PIAA Executive Director) Dr. (Robert) Lombardi, (District 1 Chairperson) Dr. (Michael) Barber, all those guys have been really plugging for the kids. And to do it in a safe way as well: They hold us to strict guidelines, and I appreciate that, the parents appreciate that.”

Devon Prep’s journey was even bumpier: The Catholic League, in consultation with the Archdiocese of Philadelphia, opted out of the fall season on Aug. 24. But Devon Prep, a member of the former but not the latter, was able to make its decision independent of Archdiocesan control. Along with La Salle and St. Joseph’s Prep, fellow PCL but not Archdiocesan schools, and Holy Ghost Prep, which left the BAL to go independent, formed the President’s Cup, a four-way round-robin.

That competition may be in peril with St. Joseph’s Prep announcing that is has suspended in-person instruction due to multiple positive COVID-19 cases. But that only underscores the appreciation of Wednesday’s game, where nothing put on paper is taken for granted.

“It feels great,” Kelly said. “None of us were really expecting to have a season this year, and so we’ve been preparing for the last month and a half, we didn’t know what was going to happen. Just to even get this one game in, it feels great. We’ll see what happens in the future, but it’s awesome. … We’re appreciating literally every second we can get, practice and on the field.”

There was slightly more on the field to appreciate from the TCA side. The Crusaders led 2-0 at halftime and controlled most of the game. Chambers’ first goal came when he pounced on a goalkeeping error, poking the ball away from Colin McCusker, rounding the keeper and slotting into the empty net.

Evan Sareyka earned a penalty kick with 80 seconds left in the first and roofed the finish into the corner to McCusker’s left. Chambers added insurance after the break, a shot from outside the box that squirted through the hands of goalie Jack Ferry.

“It feels amazing,” Chambers said. “Not a lot of teams are playing, and for us to be able to play is a blessing. For us to start off our season with a 3-0 win is the best way we can start off as possible.”

Devon Prep’s best chance came in the first half, Kelly playing Chris Walton in behind the defense, but the forward’s finish was just wide of the post with goalkeeper Zac O’Brien out and beaten. O’Brien made one save in the first half, and Brody Dutton stopped two in the second to combine on the shutout.

The more important takeaway, though, was a chance to compete. Kelly and Chambers see that, simply from the messages from friends at other schools who don’t have a fall season.

Haseltine views it in line with the school’s mission: One of the smaller schools in District 1, the Crusaders have built outsized success around multi-sport athletes. Wednesday, they fielded just 12 players, with two goalies who alternate playing in the field. The final score, then, isn’t the most important factor.

“The process is just as important as the final ending point,” Haseltine said. “Everything we do at The Christian Academy, we try to glorify the Lord, and that includes sports. That’s just part of it. Getting these kids out there, it’s just part of the process. The final efforts are great, but that’s not the final end game.”