SENIOR WEEKS: Great Valley catcher Sioutis had lofty goals for the Patriots in 2020 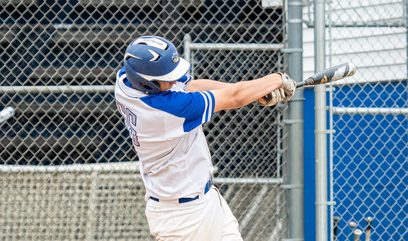 This was supposed to be the year things changed for the Great Valley Patriots.

Senior catcher Dean Sioutis was optimistic. He knew his team was better than it showed in 2019, and he was expecting the Patriots to contend in the Ches-Mont League’s American Division.

Nothing that happened in the early weeks of practice changed his mind, and Sioutis was feeling great about a breakout season at — and behind — the plate.

But nothing about the 2020 baseball season was normal. After delaying the start of the season due to the COVID-19 virus, the PIAA announced on April 9 that the spring sports season was cancelled. The news hit Sioutis hard, as he and his fellow Patriots were getting ready for what they hoped would be a shortened season.

“I was running a whole lot and doing a lot of home workouts,” Sioutis said. “It was very upsetting when we found out the season was officially off. We had a lot good young players who were going to make an impact this season. We had a lost a whole new pitching staff and I felt our offense was solid. So when we got the news it was really sad to not have a baseball season.

Great Valley head coach Matt Schultz was also optimistic about the Patriots’ fortunes this season, and he was looking for big things from his senior catcher.

“Dean has been a kid that has been with for four years now,” Schultz said. “Since he is a catcher, Dean has been by my side during his four years with the program. Many kids want to catch and Dean kept with it through the good and the bad. He has always done his best and has taken feedback extremely well, and is always working hard to improve.

“Dean has definitely improved and has learned to become a solid player and a solid leader throughout his high school years,” Schultz said. “This year, his senior year, was his time and my expectations for him and his teammates were high. Unfortunately, we are not at a place to see it through and I wish him nothing but success as he moves forward.”

Sioutis will continue his academic and athletic career at Thomas Jefferson University (formerly Philadelphia University), and he is very excited about his college career.

“I had two college offers coming into this spring,” Sioutis said. “I had Thomas Jefferson and Mercyhurst and I picked Thomas Jefferson because I want to major in sports medicine and they have a real good program and graduate program, so I am really excited to be going there. I just wish we would of had a final senior season of baseball this year.”