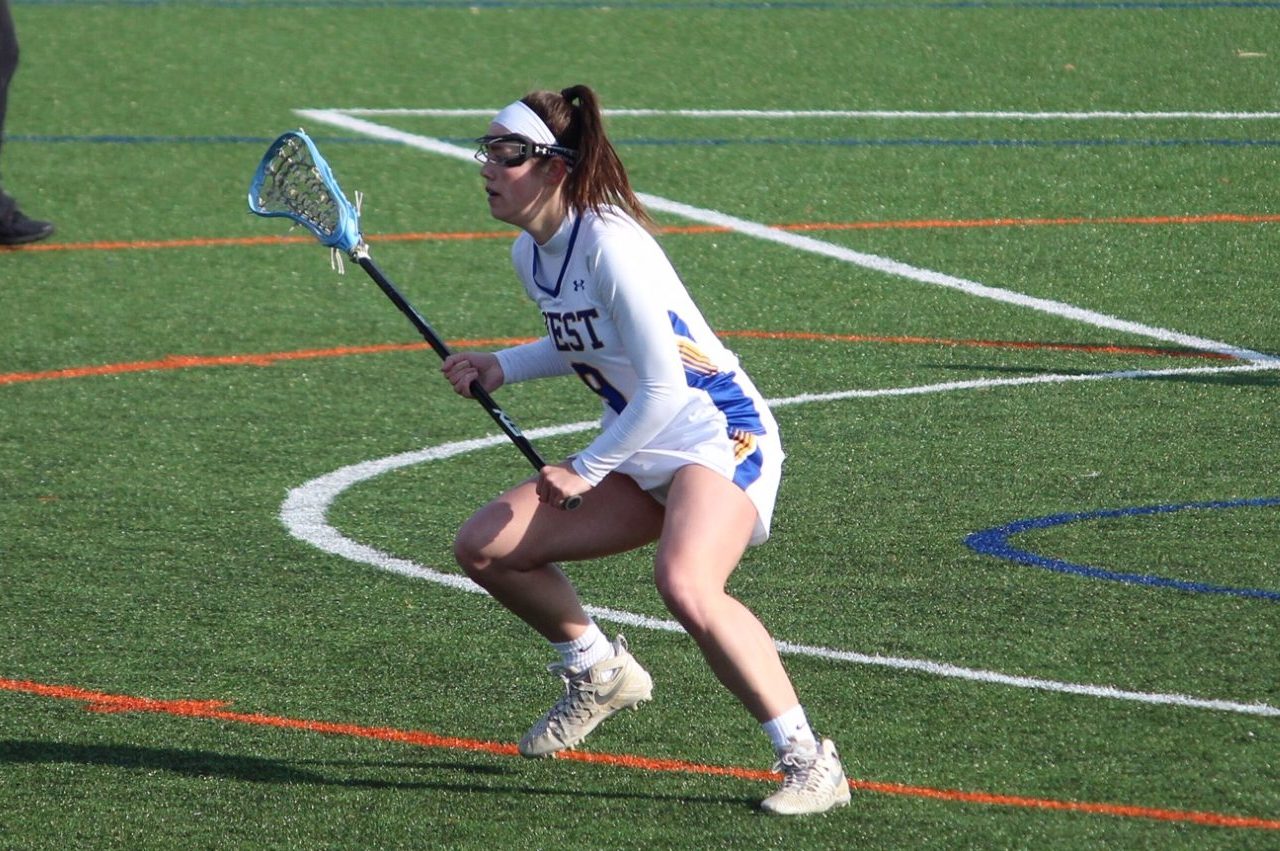 The past few months were supposed to be busy, and momentous, times for senior student-athletes all across Chester County – with the final season of their high school careers, graduation, prom, etc.

A worldwide pandemic threw a monkey wrench into all of it, leaving most in a sudden, jarring state of inaction — but not Downingtown West’s Regan Rightmire. In addition to workouts to stay fit for her upcoming college career, the lacrosse standout decided to use the extra time to chip in and help in the effort to battle COVID-19.

In the span of about two weeks, Rightmire used her expertise with a sewing machine to create more than 100 cloth facemasks. It probably would have been more if not for the limitations for materials, which are now in great demand.

“I ordered the materials online and I sewed them on a sewing machine individually,” she explained.

“And then about two week ago, I started selling them to people around me and donating the profits to the Lord’s Pantry.”

A three-year starter, Rightmire was a lockdown defender for the Whippets, but she who also had a knack for scoring a bunch of big goals. She wound up with 30 goals and 16 assists for her career, which is a lot for the position.

“Regan is the type of player every coach hopes for,” said West head coach Brittany Conzentino. “I wish I had 20 of her.”

A year ago, the Whippets advanced all the way to the PIAA Class AAA Semifinals before falling to Harriton.

“Only two of us seniors are going on to play in college,” Rightmire pointed out. “For the rest, it was their last game and they didn’t even know it. And even though I have a college career ahead of me, it still hurts me that I will never put on the West uniform again.

“We were so ready to keep up our high level of play. We were really pushing all through the winter. We started preseason right after Thanksgiving break and everybody was all-in.”

The 2020 team had a few practices and a couple scrimmages before the plug was pulled. Since then, Rightmire authored and followed her own personal workout program until last Monday, when she began the summer training program for Gettysburg College, which is where she is headed this fall.

“I was using free online programs that are available now that a lot of people are at home and looking for some way to keep active,” she said. “It’s tough to stay motivated because you don’t really know what is coming in the future or when things may get better.”

In addition, Rightmire looks forward to Fridays, when the West coaching staff and all of the varsity and junior varsity players have been gathering on Zoom for virtual meetings. In late May, the group planned and executed a virtual Senior Night for Rightmire and her fellow classmates.

“It’s a way to motivate each other,” she said. “We just share what we’ve been doing and trying to stay connected. So even though we are not playing, we can still be best friends just like we would be if we were playing.

“It’s important for us to stay together in this time. It was devastating to lose our season because we knew this was going to be a great one for us. We have great team chemistry. But it is what it is. That’s not something we can change.”

A Downingtown native, Rightmire’s first love was soccer, and she played for 13 years until a knee injury just prior to starting high school. She didn’t become serious with lacrosse until the sixth grade, and it took a while for her to warm-up to the sport.

“My best friend (and fellow West senior) Callie Lundmark kind of convinced me to play,” she recalled. “I didn’t love it at first, but I made the travel team in sixth grade. I said that I would try one season and then go back to soccer. But during that season, I fell in love with it. And I’ve loved it ever since.”

Rightmire started as a midfielder as a freshman at West but filled in for an injured starting defensive teammate midway through the season. She spent two seasons in the backfield, but was planning to move back to the midfield for 2020.

“Regan is hardworking, dedicated and the epitome of a team player,” Conzentino said. “She is not flashy, but does all the little things which truly makes a team successful. She has unbelievable speed and athleticism, with a very high lax IQ, which made her a force to be reckoned with.”

Rightmire’s uncle, Chris Reno, played basketball at Gettysburg. And the women’s lacrosse program won back-to-back Division III National Championships in 2017-18. So when it came time to look at colleges, it was at the top of the list.

“My mindset was to find a school I wanted to attend academically and then make lacrosse fit into it,” she said.

“My uncle loved it there, so I figured to check it out. I just loved the school and the lacrosse program is great there.”

She verbally committed in October of 2018. The Bullets are getting a very versatile and unselfish performer.

“I’ve never been the showoff type,” she said. “I think it’s important that everybody gets touches of the ball and works together well. I’m not the one that is going to force it to the cage.

“Personally, I like to move it around quickly and goals that come from working together are so much more rewarding to me.”

SENIOR WEEKS: Great Valley catcher Sioutis had lofty goals for the Patriots in 2020
SENIOR WEEKS: Hanchak hoped to get Westtown over the title game hump in 2020