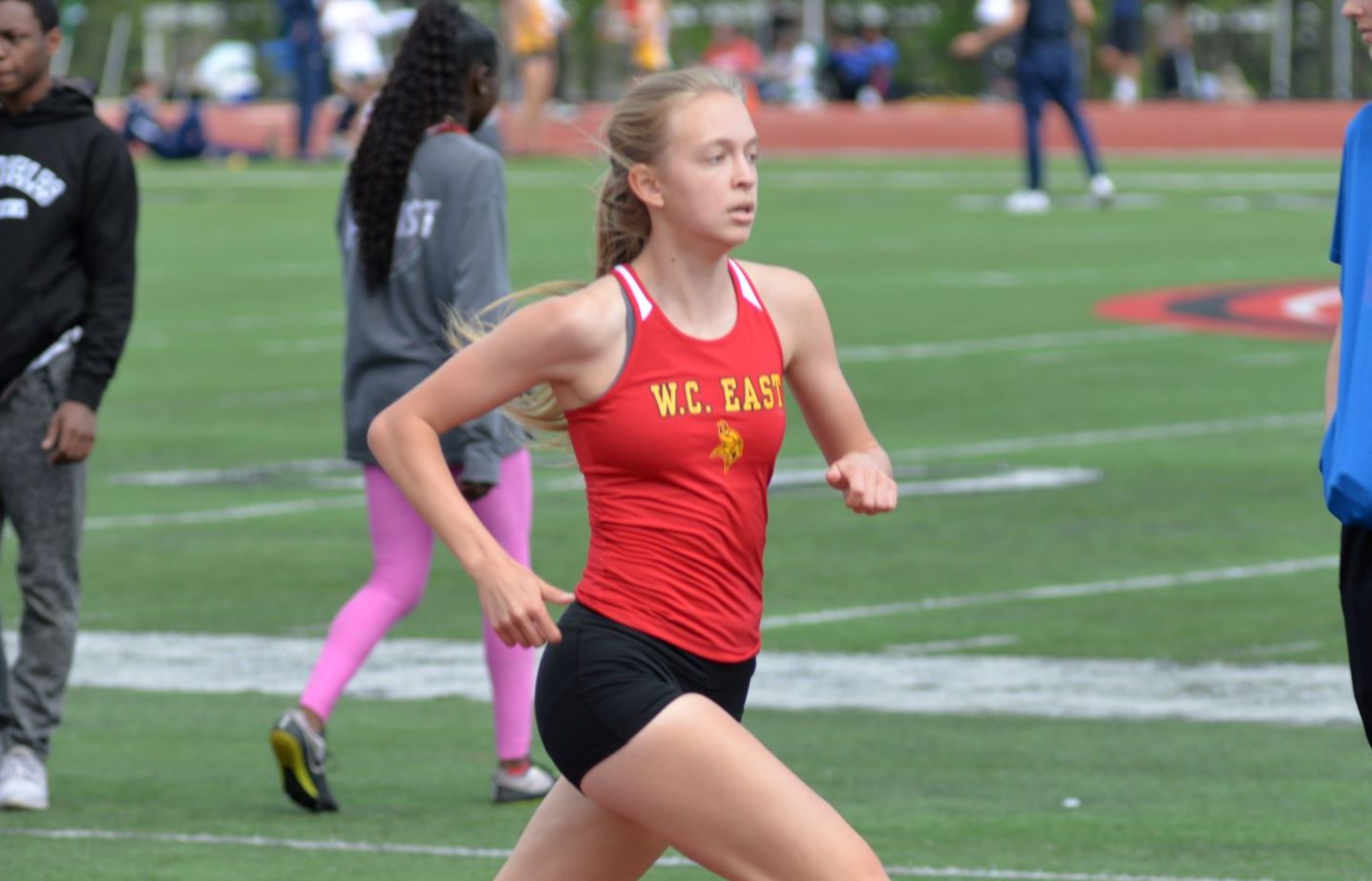 West Chester East senior Allyson Clarke has blazed a memorable trail during her four-year running career for the Vikings.

“Ally is no doubt one of the top five distance runners and track athletes in our school’s history,” said Kareem Lanier, who has coached the West Chester East track teams for more than 15 years.

“This spring, my main goal was to the break our school record in the 1,600 meter run (5:01),” said Clarke. “Ideally, I wanted to break the five-minute barrier. Coach Lanier and I decided we would go all in for the 1,600 this spring. Last winter, we worked more on my speed. I have the endurance needed, but speed is the area where I always came up short. I was really excited to give it a shot this spring, but the pandemic had other plans.”

On April 9, the PIAA cancelled the spring sports season, putting an end to Clarke’s running career – at West Chester East. She will run both cross country and track for Bucknell University starting in the fall.

“As much as I longed for one final season as a Viking, I think the cancellation of the track season was the right call,” said Clarke, who plans to major in biomedical engineering at Bucknell. “We are in the midst of a pandemic and the health of our community should come first.

“That being said, it was extremely upsetting to hear that the season had been cancelled. I definitely had a few nights where I allowed myself to grieve about all the missed opportunities. I realized, however, that is was necessary to find the silver lining in the situation. I had more time to focus on core and strength training. I was also able to start building my base for cross country next fall.”

As a freshman on the West Chester East track team, Clarke not only set the school record in the 3,200 meter run but made her mark at the Penn Relays, helping the Vikings’ 4×800 relay team qualify for Districts with a PR performance.

“I ran the leadoff leg, which some may say would be intimidating as a tiny freshman on the same starting line as teams from Jamaica,” said Clarke. “My mind, however, was focused on the race and getting the baton to the next leg as fast as possible. Penn Relays is always a fun experience.”

Last spring at the District 1 track championships, Clarke helped the Vikings set a school record in the 4×800 relay (they also finished fifth and qualified for States). It remains one of her favorite memories as a West Chester East runner.

“We had been chasing the school record in the 4×800 all season and missed it by a few seconds at Penn Relays,” said Clarke. “Coach Lanier had told us numerous times that the competition in the {District 1] finals would be so intense that it would bring to us to break the school record, as long as we came in the top eight and qualified for States.

“Just before the [4×800] finals, things weren’t looking so great. I ran the 3,200 meter run an hour before the 4×800; and, although I didn’t go all out, I still had to put some effort in so that I would qualify for states in the 3,200. Another one of our team members was coming down with a cold. Our lead-off leg was nervous for her one mile race later in the day and our second leg had been at the prom the night before. However, once the race started, we started to see our fitness show through and grew more confident with each second.”

After the leadoff runner ran a PR 2:20, the second leg was clocked at 2:26 and the third leg ran 2:20 and handed the baton to the anchor, Clarke, in close pursuit of eighth place.

“The whole race I was just running as fast as I could,” said Clarke. “I remember sprinting down the finish line with three other girls right next to me, each of us fighting for a spot on the podium. The moment I crossed the finish line I collapsed to the ground and started crying. For some reason, I didn’t believe that we had qualified for States and I had to ask my coach across the track. I ended up running a PR (2:18) and the team ended up finishing fifth. I still get chills when I think about that race today.”

“I think my best [cross country] race last fall was at Districts,” said Clarke. “I had struggled in the early season because of the stress of my college search, but I broke through at the Ches-Mont race. That race gave me the confidence I needed going into Districts. Our team was trying to qualify for States again and I knew I had to give it my all for them.”

Clarke stayed with the lead pack through the first mile, then as the pack started to spread out, she was among the top 10 runners. With about 200 meters to go, Clarke had moved up to fourth place.

“For a few seconds, I was complacent with my position, but then I thought of my team,” said Clarke. “I knew that every point counted and I started kicking as hard as I could. I passed the girl in front of me and I was in third place, but I kept kicking out of fear that she would catch me again.”

With 50 meters to go, Clarke was in third place, with a gap between her and the second-place runner.

“I didn’t think I would be able to catch her, but I found another gear,” said Clarke. “I remember thinking to myself. ‘You finished second last year, and there’s no reason you can’t be second again. Do it for the team.’ I kicked all the way through the finish line – I don’t usually have a kick so I really surprised myself in this race.”

“Ally is a great teammate – she was always willing to help the team out in a dual meets or on a relay,” said Lanier. “Her physical and mental preparation for meets is superior. She sets goals and achieves them.”

Last winter at the indoor state championships, Clarke played a key role on the Vikings’ distance medley relay team finishing a medal-winning seventh, as she ran the anchor (1,600 meter) leg.

“I ran the mile early in the day, and I had about three hours of rest before the distance medley relay,” said Clarke. “Our DMR was trying to earn a medal, despite some of us having tired legs. When I got the baton I knew I had to give it everything I had. Each leg on our team had run so well, I couldn’t let them down as the final leg. We ended up running our second-fastest time of the season. It’s always such a fun experience when you can medal with your team. Coach Lanier and Coach Wiggins then took us to get ice cream at the Penn State Creamery, which may been an even better reward than the medals we got.”

Off the track, Clarke is an achiever too. She is the West Chester East senior class salutatorian, and has been vice president of the National Honor Society at West Chester East, working with the other officers to set up a tutoring system for students at the school.

Lanier said, “I’ll miss Ally and am very proud of all of her accomplishments. I am blessed as her coach to have seen them.”