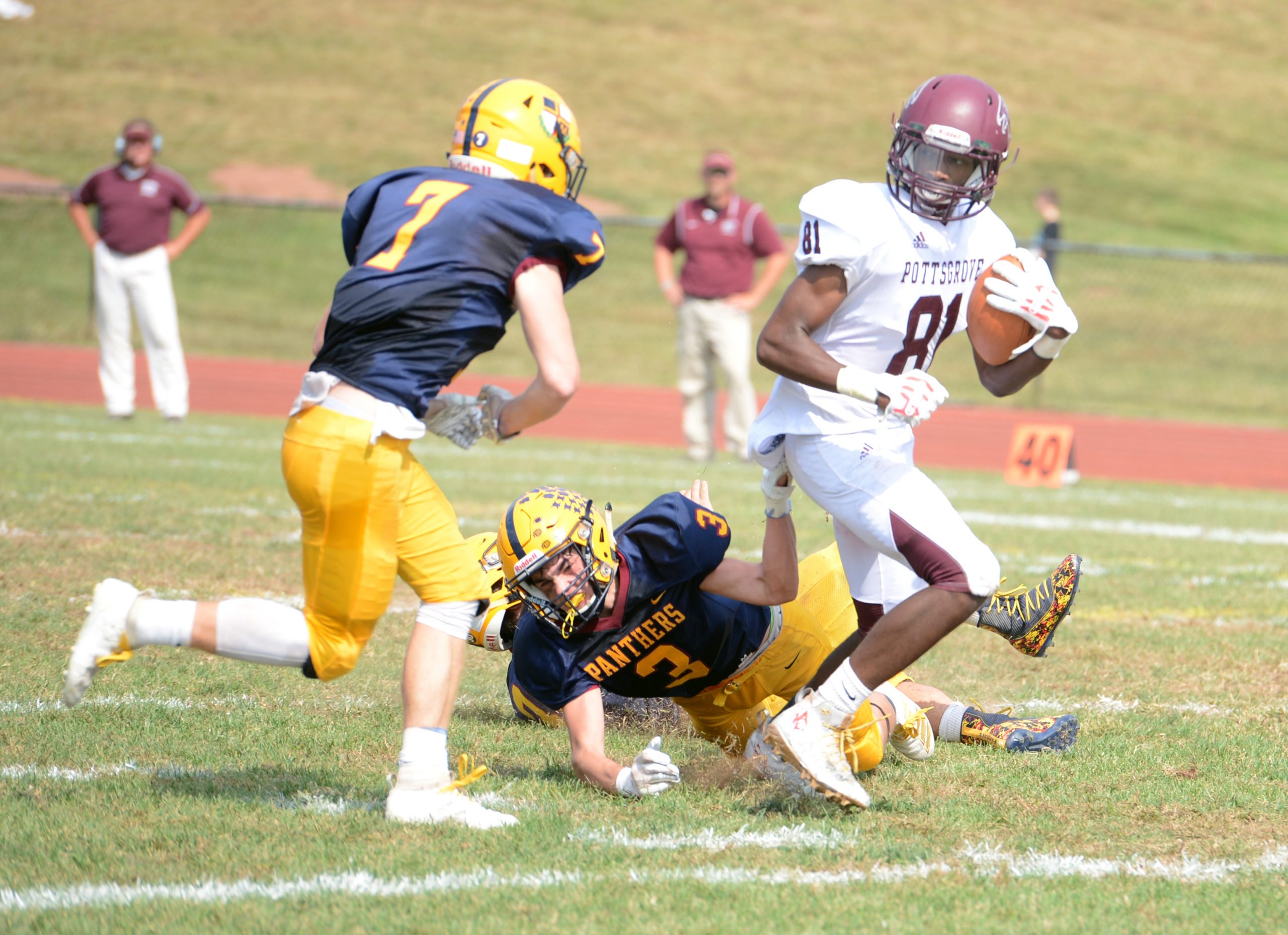 Pottsgrove senior Messiah Smythe spent the first three years of high school at Frontier Division rival Upper Merion, including scoring a touchdown against the Falcons as a junior, before transferring before the 2019-20 school year

After competing against Pottsgrove for three years, it didn’t take Smythe long to become a big part of the Falcons’ athletic program and school community — just a matter of minutes in the first workout he attended last summer, according to head football coach Bill Hawthorne.

“What Messiah did that a lot of kids who are in new situations and new environments have trouble doing is jump right in,” Hawthorne said. “I remember he came to our lifting and condition session and within 10 minutes he was hanging out with the guys, talking to the guys like he’s been there forever. His ability to adapt, he’s a heckuva personality. He’s a great young man. We lucked out on his addition that’s for sure.”

Smythe wasn’t fazed by a new school – surroundings don’t affect your will to work.

“Me, the person I am, I can work hard in any environment,” he said. “I can go into a different environment very fast because that’s just who I am. … I know that coming into a new program, I basically had to open up to my teammates in order for us to have a successful year.”

Smythe was a three-sport athlete at Upper Merion, competing in football, basketball and switching from baseball to track starting his sophomore year.

He said he gets his multi-sport talents from his mother, Akilyah Mainor, who played basketball at Neumann University, and his grandfather, Rickie Bethea, who was a standout track & field athlete.

The senior was set to play all three varsity sports for the Falcons this year before the COVID-19 pandemic cancelled his track season just more than a week in.

“That’s kind of how I am with anything,” Smythe said of staying busy with three sports. “Like school, once I’m done with work I’m like, ‘What’s the next thing?’ I feel like the type of person I am, I always have to be moving like a running generator.”

Smythe was expected to run events ranging from the 200-meter to the 800-meter and be a big points getter for the Falcons in dual meets throughout the spring.

In his short time with the Pottsgrove track team, Smythe led the Falcons through warm-ups and in the weight room and was in consideration to be one of the team’s captains before the season ended.

“He was willing to do everything I asked in just that short period of time knowing the young man,” Wright said.

“It’s impressive because it just shows what life’s going to turn out to be for him,” Wright added. “If he can transition from a difficult situation, regarding leaving a high school to then get here and project leadership, friendliness … helping the younger kids and talking to me respectively, he’s definitely gonna make out.”

Pottsgrove’s Messiah Smythe made a fast impression during his one year as a Falcon. (Austin Hertzog – MediaNews Group file)

Smythe left similar impacts on Hawthorne while playing wideout, defensive back and kick returner for the football team and on Falcons boys basketball coach Jack Flanagan as one of the team’s only big men this winter.

His ability to mesh with his teammates was one of the traits Hawthorne noted in Smythe along with his on-field abilities. On the basketball team, Smythe’s dedication as a senior playing a reserve role for a Pottsgrove team in a rebuilding year caught Flanagan’s eye.

Unable to catch a ride, Smythe walked an hour to practice on multiple occasions. His efforts in practice prompted some of his teammates to reach out to Flanagan and ask if Smythe could be one of the team’s captains.

“He showed leadership that will never show up in a box score, but was so uncommon,” Flanagan said. “You’re working hard every day in practice. We had younger guys who would do that, but they knew they were going to be here for two, three years. He wasn’t going to be here next year because he’s a senior and on the last day of practice, he’s practicing harder than anyone. He was an absolute honor and a privilege to coach this year. … He showed dedication to a program he had just come to that was unprecedented for me.”

Though he’s a competitive person who has always liked to prove doubters wrong about his athletic abilities, Smythe said he hasn’t always had the work ethic to match. It’s something that’s come along more recently as he’s matured and thought about his future.

This summer for his birthday on July 3, instead of other gifts, Smythe bought a set of cones and a tire to work out for his senior football season, hoping to earn the opportunity to play in college.

Smythe announced earlier this week that he will play at King’s College next fall, where he will also study neuroscience to satisfy his curiosity of the human brain.

“I didn’t always have an amazing drive,” Smythe said. “(What changed was) having the realization that if I don’t work and do these things, in 20 years when I look back at my life, what is the meaning of it? Basically, I wanted to, not only in other people’s eyes but in my eyes, I wanted to look back and see that I actually worked for something. Even if I failed at it, I would set myself at a higher standard. If I fail, I know that I failed at a higher standard than everyone else.”

While his time at Pottsgrove was limited, Smythe made his senior seasons as a Falcon count. He left a mark on all three programs he was a part of and his coaches anticipate that won’t change in the future.

“If he can keep that same attitude and adjust to things the way he did at Pottsgrove, he’s going to be something,” Wright said.

SENIOR WEEKS: Conestoga’s Lanouette leaves his mark on and off the track
SENIOR WEEKS: Westtown runner Morrison proud to have led Moose to titles inside and out