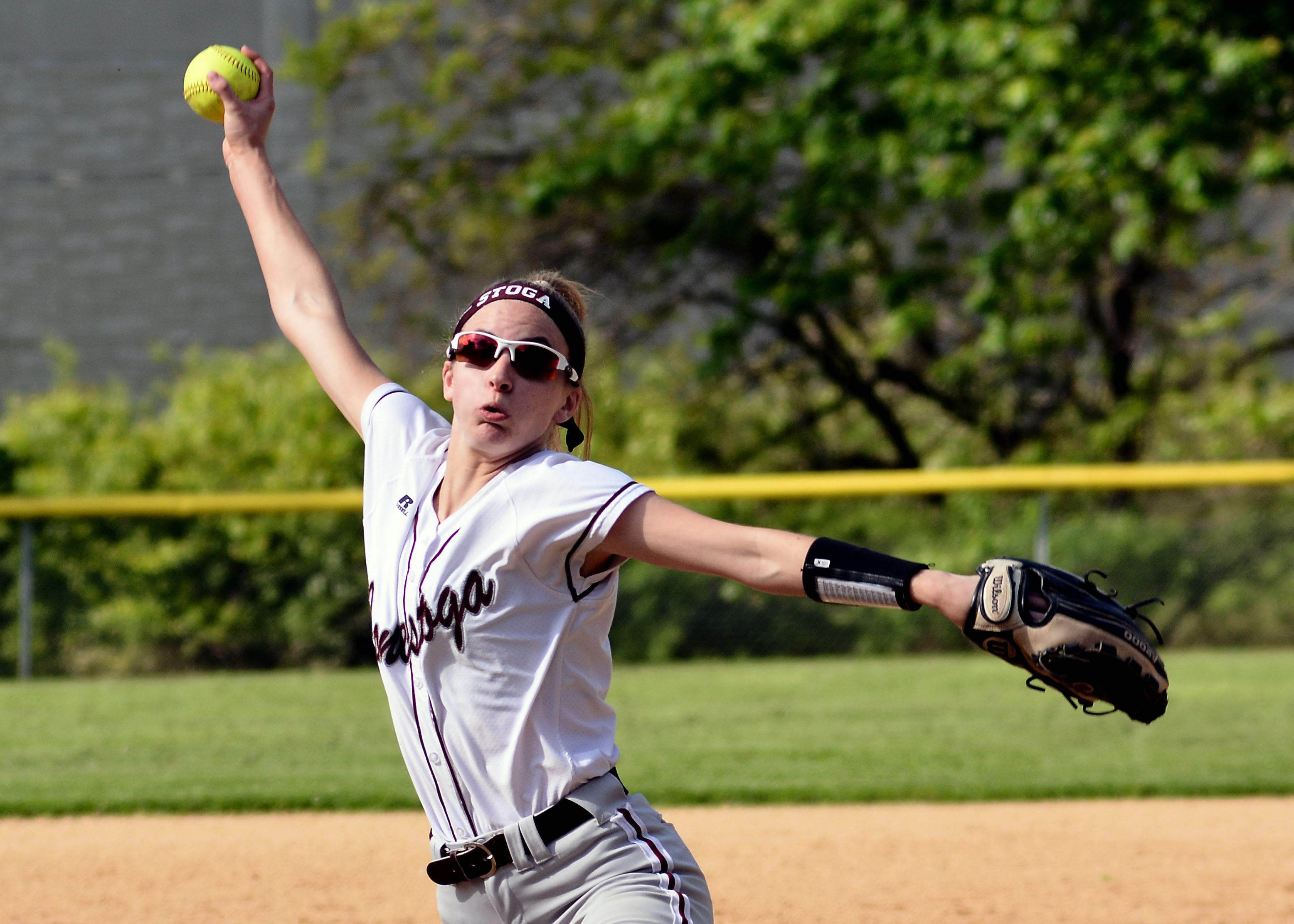 As a junior, she posted a 17-4 record with a 1.67 ERA, striking out 139 batters while allowing only 13 walks. She received first team All-Central League and All-Main Line selection, and second team All-Area honors.

“La’s changeup is devastating, and ranks up there with any college pitcher,” said Conestoga softball co-head coach Todd Whitlow. “It’s fun to watch her baffle batters with it.”

In the offseason, Lofland was building herself up to achieve more goals in 2020.

“I was hoping to achieve a certain number of strikeouts for my Conestoga career,” said Lofland. “During the offseason I focused a lot on getting stronger physically, which has already proven to have paid off while at bat and pitching. I also focused on perfecting my pitches.

“I am truly devastated by the delay of this season [due to the coronavirus pandemic] and still have hope that we will get back on the fields. But, first and foremost, it is important for everyone to stay safe and healthy.”

“Ever since my freshman year my goal was to be on the Central League Champions banner for softball, in our school gym,” said Lofland. “As of last year I am right under my mom’s title and that is very special to me. My mother is one of my biggest supporters and I am so grateful to have such an athletic, giving, and caring mom.

“Since the beginning of my career my mother has been my biggest role model. She has taught me everything to know about the game of softball. She continues to give me confidence and cheers me on.”

Another key mentor for Lofland was Pete Ricci, who coached the Pioneers last spring. Unfortunately, Ricci passed away due to cancer last December.

“Even though Coach Ricci has passed away, his legacy will forever be known,” said Lofland. “He was one of the best coaches I have ever had. He taught me not just about the game, but about life. He always made sure every player knew they were important. Ever since my freshman year he believed in me and called me ‘his girl.’

“Coach Ricci was the strongest person I have ever known. Even while battling cancer he would come to practices and games with the best attitude. He taught us all how to live in the moment and to never give up on your dreams.”

As the pitcher on last year’s Central League champion squad, Lofland was asked how she viewed her leadership role on the team as a leading senior performer.

“As a senior, my goal this year is to make sure everyone feels a part of the team,” said Lofland. “I am so extremely grateful to have such an amazing group of younger athletes on our team. I have given inspirational notes to every player, to make sure they know how important their roles are.

“On the mound I always put my full effort in, not just for me but for the team. I am a big believer that one person does not make a team. So far everyone has done their part and put in 100 percent. I hope we continue our season soon, so I can go back to supporting and giving my all to Conestoga softball.”

Whitlow said, “Lauren makes me smile. She is selfless, always playing for her team and never giving up. She exemplifies what any athlete can truly control; full effort and a great attitude.”

Conaway, who has coached Lofland for the past three years, added, “There are certain student-athletes you coach that make an impact on you as a person. Lauren is definitely one of those players for me. She has shown a lot of resilience on the pitching mound, dealing with the passing of coach Ricci and life in general.

“I found it interesting when a few years ago Lauren grabbed No. 15. That was the [softball] number worn by my daughter Emily, who graduated from Conestoga four years ago. I jokingly said to Lauren, ‘You have some big shoes to fill by taking that number.’ Lauren responded by saying, ‘I know.’ I knew right then that she had a lot to offer.”

As a freshman, Lofland was involved in Adopt-A-Grandparent Club, which provides students with an opportunity to interact with senior citizens on a personal level.

Next fall, Lofland will attend nearby Eastern University, where she will play softball and major in psychology. At the present time, she is leaning toward becoming an adolescent psychologist.

SENIOR WEEKS: Villa Maria’s Young is restless as the Hurricanes wait out coronavirus
SENIOR WEEKS: Malvern Prep’s Offshack had (has?) big plans for Friars in 2020