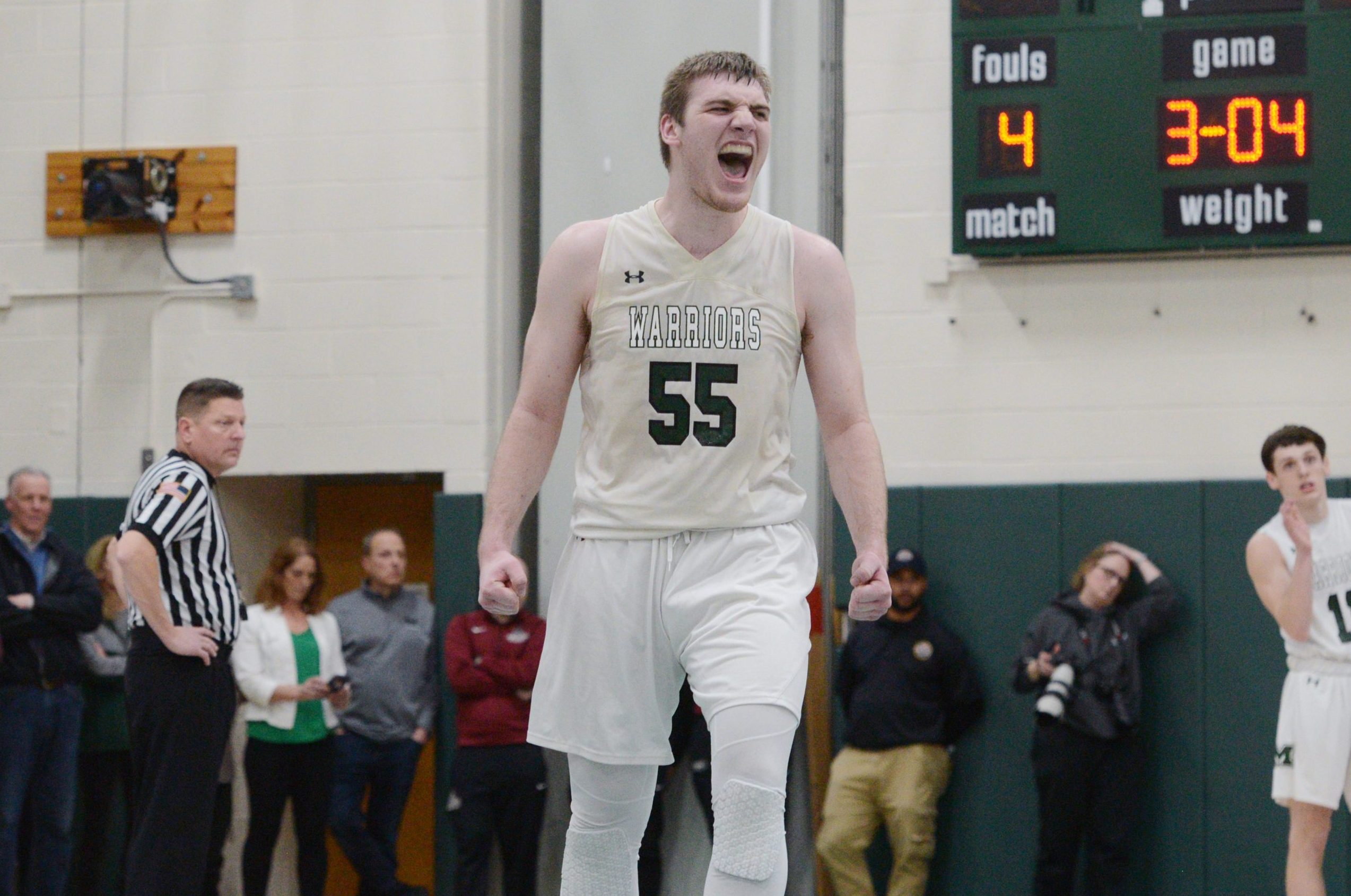 Methacton’s Jeff Woodward celebrates as he comes off the court during the Warriors' District 1-6A quarterfinal win over Pennridge. (Owen McCue/MediaNews Group)

Jeff Woodward has spent his whole life in the Methacton School District.

He remembers following the boys basketball team when he was in elementary school. He remembers watching 2013 graduates Brendan Casper and Matt Forrest, 2014 grads Zach Jenkins and Dillon Alderfer and the 2015 team, the Fab Five, which won the first state playoff game in school history.

He remembers watching with his friends Erik Timko and Brett Eberly. The three, who have been playing basketball together since they were in fourth grade, watched and dreamed that they would be out there one day, doing what those teams were doing and more.

Fast forward to a new decade in 2020. Woodward and his buddies realized those dreams. They won three straight Pioneer Athletic Conference championships. They won the 2020 District 1-6A championship. They’re in the state quarterfinals for the second straight year.

Woodward, the Warriors all-time leader in points and rebounds, is the Reporter/Times Herald/Montgomery Media 2020 Boys Basketball Player of the Year.

The 6-foot-10 center is currently sitting at 1,448 points and 1,139 rebounds after the second round of the state playoffs.

“In season and in the moment when they happened they are obviously really cool and really special,” Woodward said, “but I think after the season is really going to be when everything really hits. Hopefully I haven’t taken off the jersey for the last time. After I do officially take the jersey off for the last time, just realize how much I accomplished at the high school. It’s wild. Going in as a freshman and seeing the progress I’ve made — not just on the court but as a leader and a man in general — is really crazy. Breaking the records are awesome, but the support I’m receiving from my teammates, my classmates, people in the building, people in the community — it’s really been incredible. It’s a really special feeling. We’ve always had a great basketball program, I’m just happy that I’m able to help our team reach new heights and reach new levels of success we’ve never done before.”

Methacton’s Jeff Woodward (55) goes in for an uncontested layup in the District 1-6A championship game Saturday, Feb. 29, 2020 against Cheltenham. (James Beaver/For MediaNews Group)

He fulfilled his promise to have success on the court and he has taken over the role of providing inspiration in the Methacton community. He’s always played in front of good crowds during his time with the Warriors, but this year it’s grown from a gym full of classmates, teachers and parents to something different.

Now, Main Street Pizzeria & Grille and Bravo Pizza are hosting the team to celebrate the program’s first district title. The team returned home from Temple University’s Liacouras Center with their gold medals and a firetruck escort. The Collegeville Bakery updated its good-luck sign every few days as the Warriors dominated opponent after opponent. Woodward and Timko went to an elementary school to help a young fan celebrate a birthday.

“The level of support has been absolutely off the charts, absolutely incredible,” Woodward said. “All the people that we’ve inspired and all the people that we’ve given something to do and something to root for — even when people can’t make it they’re listening in when there’s radio broadcasts or they’re watching in on different streaming services and stuff. The level of support that we have within the community is crazy. That’s the one thing that has really been different from last year. We had a great support system always, but the difference from last year to this year with how much the community is coming out, how much they’re supporting us. They’re still rooting for us even during this break that we’re having.

“We’re not the biggest school in the district. We’re not the biggest school in 6A — we’re on the smaller side. The level of talent we have, the great coaching we have, the great kids. We just showed that there’s no limit to what we can achieve. I think the kids in the district really are inspired and hopeful for when they get up to the high school.”

Woodward, a Colgate commit, has been a starter for four years.

As a freshman, Woodward followed his coach’s orders. At 6-foot-5, he wasn’t the force that he is today, but he still had a size advantage against most opponents. He protected the paint on defense and had a “figuring-it-out year” on offense.

His role expanded as a sophomore. He was the third offensive option, behind David Duda and Noah Kitaw, for the 2018 PAC champs.

Things really changed his junior year. The offense ran through Woodward and Duda. He earned complete trust from the coaches and averaged over 16 points and 13 rebounds per game as the Warriors won their second straight PAC title and reached the state quarterfinals for the first time in school history.

“It has been incredibly rewarding to see Jeff grow and mature as a player, a young man, and a leader over the past four years,” Methacton coach Jeff Derstine said. “As a four-year starter, Jeff’s role has evolved over the years. As a freshman, Jeff was more of a secondary offensive option, focusing most of his attention on being an active presence around the basket.  While he didn’t have a prominent role yet, he was eager to learn the ins and outs of our system. As time progressed, Jeff’s role on and off the court expanded. His coachable spirit and desire to learn has been consistent throughout his four years in our program and continues to positively impact our team in many ways. Whether it means sharing something he learned with teammates during pre-practice skill work, communicating with teammates in live game action, or leading by his performance on the court, Jeff is always looking to help the team be successful.”

His stats took a small step back this season — 13.7 points and 10.8 rebounds per game — but that’s to be expected when most games are wins by 20-plus points. His focus has always been about winning, but that was especially true this year. He keyed in on being the quarterback of the defense, getting everyone into position and helping everyone out.

“I don’t care about stats in the slightest bit,” Woodward said. “Me giving up shots to allow guys to get open looks and allow our team to win — it means the world to me. It doesn’t matter how many shots I get, how many points I score. To me it’s all about winning and making sure our team has success.”

“Jeff and his fellow captains (Brett Eberly, Owen Kropp, and Erik Timko) have modeled a selfless, team-first attitude for the younger players in our program,” Derstine said. “Their leadership as a group has been instrumental in the success we have achieved this season.”

Methacton’s Jeff Woodward (55) goes up for a shot over Harrisburg’s Nateur Dennis (3) in Saturday’s PIAA Class 6A game at Norristown. (Owen McCue/MediaNews Group)

No one knows what the final verdict will be on Woodward’s career and the Warriors 2020 season. The PIAA postponed the state playoffs two days before a much-anticipated rematch with Roman Catholic last weekend due to the spreading COVID-19 coronavirus.

“I know me, Erik, Owen and Brett really don’t want this to be the end of our careers. We all want to either go out on top or go out fighting together. We’re all going to deal with it if it is the end in different ways, but we will always play for each other. Play for the name of the front of the jersey, not the number on the back. We’re playing to represent Methacton, playing to represent our team and everybody on that team.”