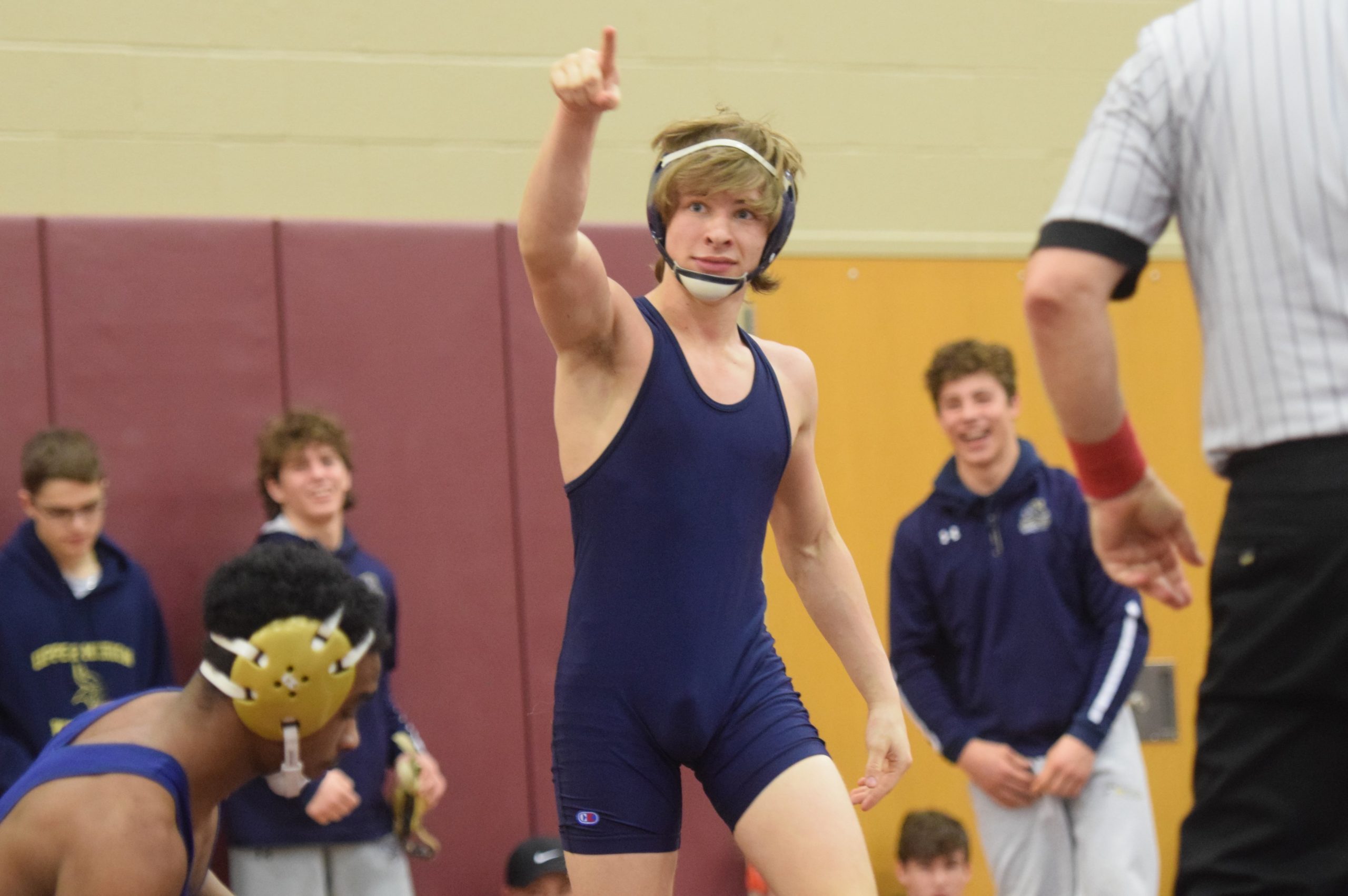 The Spring-Ford wrestling team has achieved great things this season … and it still has a month of action left.

Along the way, a number of Ram grapplers have succeeded at the individual level. Notable thus far have been Jack McGill and Joey Milano, both of whom reached and surpassed the 100-victory mark for their scholastic careers while contributing to the Rams’ various successes.

Quinn Tobin joined his teammates in that distinction Thursday. The SF senior hit the 100 mark during his team’s non-league match with Central Bucks East, 47-12 win over Patriots boosted its season record to 19-3.

Tobin’s milestone win was a 14-0 major decision over East’s Mason Stein in the 132-pound bout. Tobin took a 7-0 lead in the first period off a takedown and two near-falls, added a reversal and two more back points in the second, then picked up a three-point near-fall in the third.

“I was trying to score more points, build the lead and win the match,” Tobin (33-8) said. “I couldn’t get more points on him (Stein) in the third, but it was all right.”

Tobin boosted the rolls of the Spring-Ford mat program’s triple-digit winners to 19. He is the Rams’ second 100-win wrestler in less than a week, Milano hitting the century mark during Saturday’s action in the PIAA Duals.

The possibility of Tobin and Milano getting their 100th wins in the same match was set earlier in the season. It lasted until Spring-Ford’s fourth match of the PIAA Duals last Saturday, Milano winning at 195 but Tobin falling at 132.

“We realized when we both got to 90 wins we could get it the exact same night,” Tobin said. “It didn’t quite work out, though.”

Tobin’s accomplishment was particularly noteworthy considering he came out of his sophomore season with only 35 victories. A 32-win junior campaign stoked thoughts of getting to 100 during his senior season.

“It was motivating,” he said. “I felt it was doable if I worked hard. I got a lot of support from teammates and practice partners.”

Tobin’s major staked Spring-Ford to a 25-12 lead through nine bouts, starting a six-bout stretch run by the Rams. Jack McGill (152) and Jason Lepore (170) followed with pins around Xavier Cushman’s major decision at 160 and three-point verdicts from zach Needles (138) and Alex Johns (145).
Milano got Spring-Ford going with a three-minute technical fall of Maximus Gordon in the 182-pound opener. Louie Carbajal (195), Jeremy Wentworth (220), Cole Smith (106), Quinn Smith (113) and Gus Carfagno (120) added decisions to give the Rams an initial 21-6 lead.

With a season record of 19-3 to date, Spring-Ford already achieved championship status in the Pioneer Athletic Conference — it swept the Liberty Division regular season and was team champion in the PAC’s Individual Tournament — and the District 1-AAA Duals Tournament. It will be shooting for a repeat District 1 title during the AAA-North tournament the weekend of Feb. 21-22 at Pottstown.

Tobin is particularly motivated to show his stuff in districts, regionals and states in his final scholastic go-round.

“I definitely want a District North title,” he said. “I want to get it after losing in the finals last year. It’s definitely unfinished business.”

The Hill got off to a quick start and led Episcopal, 10-4, midway through the first quarter. Bu the Blues would struggle to score for the remainder of the half. Eve Nealon netted Hill’s only five points during that stretch, with three coming from the free-throw line after she was fouled on a long-range attempt.

Episcopal took advantage of the Hill drought by putting up 26 points and went into halftime up 30-15.

Nealon led the Blues’ offensive charge in the second half, scoring 14 of her game-high 23 points.

In the fourth quarter, Aine Farrell scored nine points as the Hill began to surge. It cut the deficit to just six late in the fourth quarter after an inside shot by Tess Gray and a Nealon three-pointer made the score 55-49. Episcopal sealed the win from the free-throw line, working the clock to force Hill to foul and scoring 13 of its final 15 points in the game from the stripe.

Farrell finished the game with 10 points and junior Cynthia Williams had 12 for the Blues.