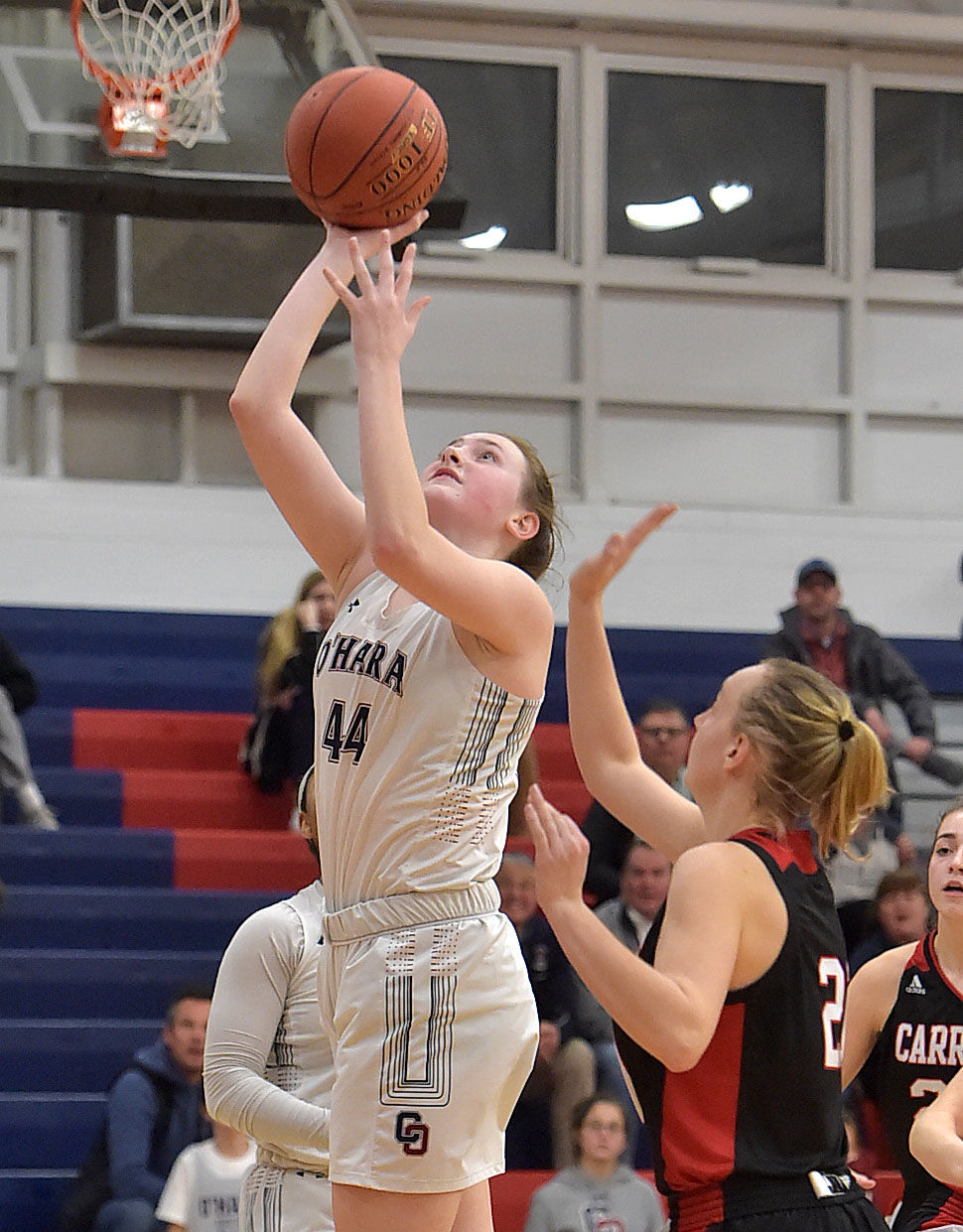 Cardinal O'Hara's Maggie Doogan hits a basket in overtime that proved to be the game-winner as the Lions claimed a 50-47 victory over Archbishop Carroll in the Catholic League quarterfinals. (PETE BANNAN/MEDIANEWS GROUP)

MARPLE — There was no reason to think Cardinal O’Hara was on its way to a blowout victory Thursday in the quarterfinal round of the Catholic League tournament.

Archbishop Carroll coach Renie Shields spent a timeout after O’Hara scored 10 straight points to begin the contest. The Patriots, who are the reigning Catholic League champs, got their act together, scoring 17 of the next 23 to take a one-point lead early in the second quarter.

And from there, the Lions and Patriots settled in and put on a show.

Ultimately, it was Maggie Doogan’s layup that gave O’Hara a 50-47 victory in overtime. The fourth-seeded Lions are off to the semifinals to meet No. 1 Archbishop Wood.

But there were plenty of ups and downs in between.

To borrow a cliché, this was a game of runs. O’Hara trailed by as many as 10 points in the third quarter before finishing the third period on a 14-3 surge.

“We have a lot trust in each other,” Doogan said. “It’s a tight group and we have the faith that we could win.”

Doogan, a sophomore forward/center, drilled a 3-pointer in the fourth quarter to put O’Hara ahead by five points. O’Hara held that edge into the final minute, but Carroll battled back to force overtime. Freshman Meg Sheridan banked a 3-pointer to make it a two-point deficit. Following an O’Hara turnover, sophomore guard Grace O’Neill was fouled en route to the basket and swished two foul shots with 5.5 seconds to play.

In the extra session, Doogan crashed the boards on a Siobhan Boylan 3-point attempt to put herself in position for a putback. Amaris Baker tipped the ball to Doogan, who had an easy layup to give O’Hara the lead for good with less than two minutes to play.

“Siobhan shot it, but Amaris was the one who got the ball to me. She made a good play,” Doogan said. “I practice layups a lot every day in practice to get me ready for this tough situation.”

Doogan was partially responsible for preventing the potential game-tying basket in the waning seconds. Baker made two free throws with 10 seconds left to make it 50-47. Carroll’s Maggie Grant received a pass but was unable to get a clean shot thanks in part to the defense of Doogan. Grant eventually made the shot, but after time had expired.

“During the last timeout, our coaches told us to stay outside and guard the 3s, to let them have the 2,” Doogan said. “I was a little surprised that she didn’t fire that one up. I mean, I had my hands up … but it was kind of shocking she didn’t shoot at the end. She’s one of my good friends and I know she is a good shooter.”

Doogan posted team-highs in points (18) and rebounds (seven) for the Lions, who shot 55 percent from the floor (11-for-20) in the second half and overtime.

Sophomore guard Sydni Scott distributed four assists to go with 10 points. She helped Boylan heat up after a slow start with back-to-back assists during the Lions’ 14-3, third-quarter run.

The Lions (18-5) have been involved in three games in the last week that have gone down to the wire. They escaped Bonner-Prendergast with a 39-38 win but dropped a 49-46 decision to Wood in their Catholic League regular season finale. Scott said the team is beginning to believe it can overcome adversity. They’ll get another chance against top-seeded Wood next Thursday at Jefferson University.

“I think we’re all working as a team and we’re all starting to come together,” Scott said. “We do a lot of team bonding stuff and that helps us a lot. I think that we got it. Our chemistry on the court is really good.”

Archbishop Carroll’s, Grace O’Neil, left, and Cardinal O’Hara’s Sydney Scott race for a loose ball in overtime. O’Hara claimed a 50-47 victory in the quarterfinal round of the Catholic League playoffs.

Boylan had her shoulder wrapped in ice after a physical game. The junior is in the midst of a breakout season. After beginning Thursday’s game 0-for-7 from the floor, Boylan scored all six of her points in the third and fourth quarters.

“I got a little down in the first half because I couldn’t make a shot, but my coaches picked me up and told me to keep shooting,” Boylan said. “Eventually, the shots started to go in.”

The Lions were able to pull off a three-game sweep of the Patriots, who will play a District 12 opponent later this month for a spot in the PIAA Class 5A tournament.

“We know how good a team they are and we had to be at our best to win,” Doogan said.

In another Catholic League quarterfinal:

West Catholic 63, Bonner-Prendergast 47 >> Alexis Gleason generated 14 points in the loss for the sixth-seeded Pandas. The No. 3 Burrs move on to the semifinals to play second-seeded Neumann-Goretti, which disposed of Archbishop Ryan in another quarterfinal.

In the PAISAA tournament:

Episcopal Academy 59, Hill School 50 >> The Churchwomen used a 15-5 run in the second period to pull away from Hill. Bella Piselli led the way with 14 points, Gaeli Keffer-Scharpf added 12 and Raeleen Keffer-Scharpf pitched in with 10.

EA visits Germantown Academy in the quarterfinals Saturday at 2 p.m.