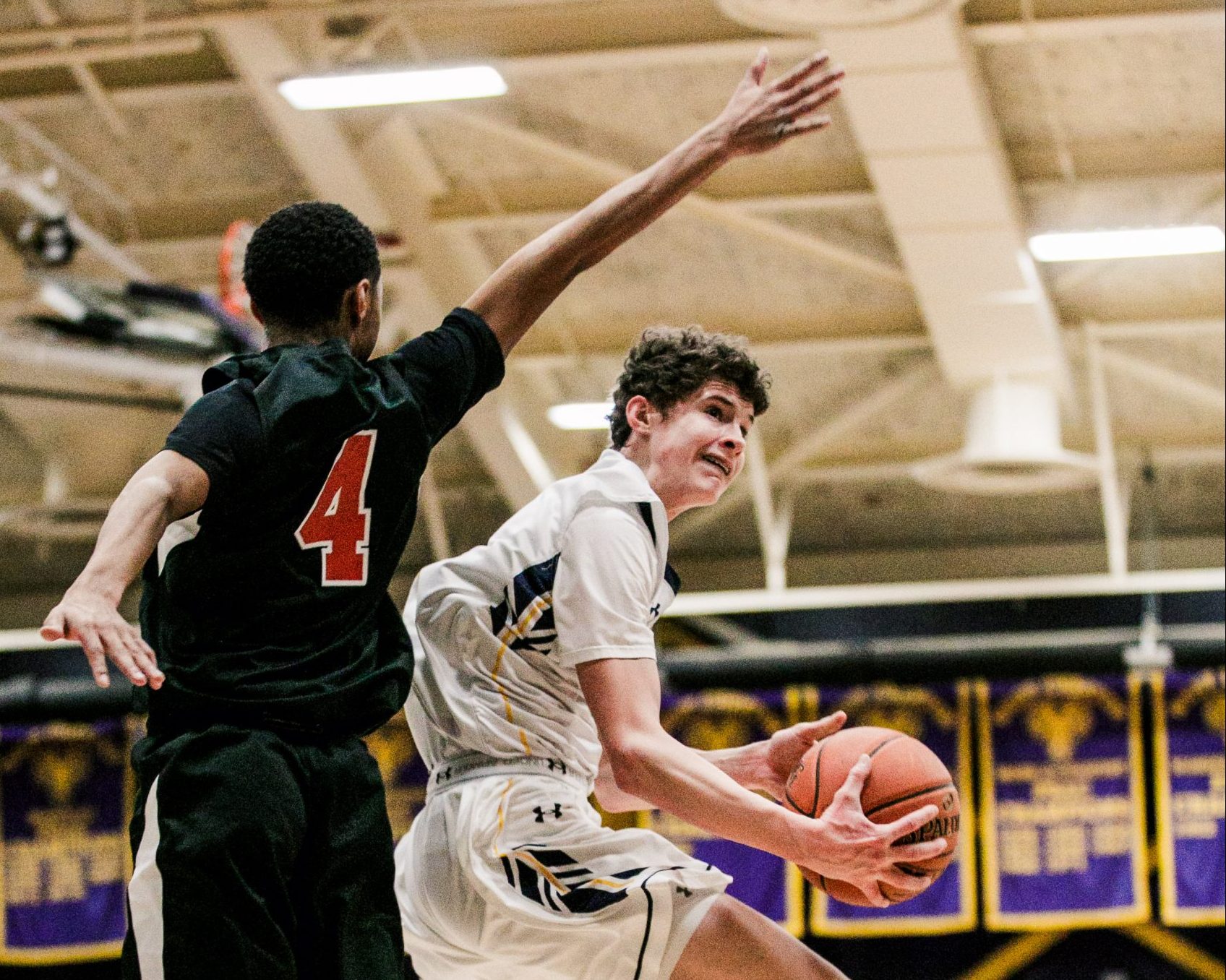 WEST CHESTER >> There will be a new Ches-Mont League boys basketball champion on Tuesday night.

That was determined Saturday afternoon at Hollinger Field House on the campus of West Chester University.

A mere seven days after losing at the buzzer to Coatesville, the Unionville Indians more than returned the favor with a thrilling 70-62 win over the Red Raiders.

Unionville advanced to Tuesday night’s championship game at Hollinger at 7:30 to take on West Chester East, which had to hang on to defeat a game West Chester Rustin squad, 58-52 ,in the opening semifinal on Saturday.

“We really shot the ball well in the first half,” Unionville senior center Logan Shanahan said. “Playing them last week gave us a ton of confidence coming into this game. We led the whole way last week and they came back late to take the game. Tonight we knew we had a good chance to win the game.”

Shanahan was a force all night for Unionville, leading the Indians with 22 points, to go along with 10 rebounds and two blocked shots. But whenever a team plays Coatesville, you know a Red Raiders run is coming.

That run came in the fourth quarter, as Coatesville (17-6) entered the final frame trailing, 55-45. The Red Raiders turned up the defensive pressure to try to turn Unionville over and score in transition.

But Unionville settled down and kept its composure. Pete Kucharzuk scored on a pretty back door play to give the Indians a 63-56 lead with 3:01 to play. The Red Raiders came right back on a Dapree Bryant layup, and it was a 63-58 game. Bryant had 16 points on the night, but Jhamir Brickus led the Red Raiders with 18 points.

“We have done a better job this year of taking care of the basketball,” Shanahan said. “When they turned up the pressure we knew we had to settle down because they get so many of their points off turnovers.”

With the score 64-60 in favor of Unionville, Coatesville fouled Bryce Whitlock. But Whitlock missed both free throws, giving Coatesville life. The Red Raiders came down the floor and missed a three, but Bryant elevated and scored on a follow and it was 64-62 game with 56 seconds to play.

With Coatesville playing man-to-man full court defense, the Indians held together and Jon Passarello got fouled, draining both free throws for a 66-62 Unionville lead. Jhamir Brickus then drove the lane hard and scored, but it was waived off for an offensive foul with 23 seconds to play. Unionville hit the next four free throws, and mighty Coatesville was out, while the Indians began to think about Tuesday’s date with West Chester East.

“We have good players who are very connected to each other,” Unionville coach Chris Cowles said. “And when they turned up the pressure the kids know each other so well that that took them through it. They are very good players.”

The loss was a bitter one for the defending Ches-Mont League champions, who now will get ready for the District 1 Class 6A playoffs in 10 days.

“We took some 3-pointers at the wrong time,” Coatesville coach Marc Turner said. “But, we were down 15 and came back and sometimes kids get caught up in the game. But, bottom line was Unionville played better than Coatesville today.”

The first game was a close affair between West Chester East and West Chester Rustin. The Vikings (21-2) ran out to a 22-9 lead on the Golden Knights (15-7) after one period with 6-foot-9 senior Andrew Carr scoring 14 of his 28 points in the opening period. Carr led both teams in scoring, grabbed 11 rebounds and blocked four shots.

“We always want to start fast and we did that today,” Carr said. “But Rustin played a real tough game and we stopped playing fast in the second quarter. It took us to get back in the locker room at halftime and get things together and attack the basket again.”

Whatever happened at halftime worked superbly for West Chester East. The Vikings outscored the Golden Knights, 19-9, in the third quater, shooting seven for 10 from the field to take a commanding 45-31 lead after three periods.

Carr scored in tight to make it a 35-24 West Chester East lead, and the Golden Knights were having trouble keeping the Vikings’ big man from going to the basket. Tym Richardson had a strong game for the Vikings and his follow made it 41-28 late in the third. Richardson scored 20 points to go along with seven rebounds, and he and Carr were a two-man wrecking crew, both scoring and controlling the boards.

“We need to attack the basket and we got away from that in the second period,” Richardson said. “We got back to it and we really turned up the defense pressure. Rustin likes to put up a lot of shots and we needed to take care of the boards.”

But Rustin made the Vikings sweat for the win. IV Pettit and Barrouk drained 3-pointers, and the West Chester East lead was down to 47-42 with a little over four minutes to play. Destined McCray scored on a runner to make it a 49-42 game, but still, Rustin would not go away.

Barrouk, who was fantastic all game, drained another three from NBA distance, and then Pete Reinheimer drove hard to the basket to score and it was a 49-47 East lead with 2:04 to play.

“Rustin deserves a ton of credit for the way they fought today.” Carr said.

But, as quality teams do, the Vikings found a way to hang on. Richardson went hard to the basket for a score and after a Golden Knights miss, Carr drove the lane and scored, and suddenly the Vikings’ lead was up to 55-47. Rustin missed its shots the next two times down the floor, and West Chester East punched a date to Tuesday night’s championship game.

“I mean, it was a tough game today but we knew it would be,” Richardson said. “Playing for a Ches-Mont League championship is an amazing feeling especially with this being my senior season. I really want to win it.”