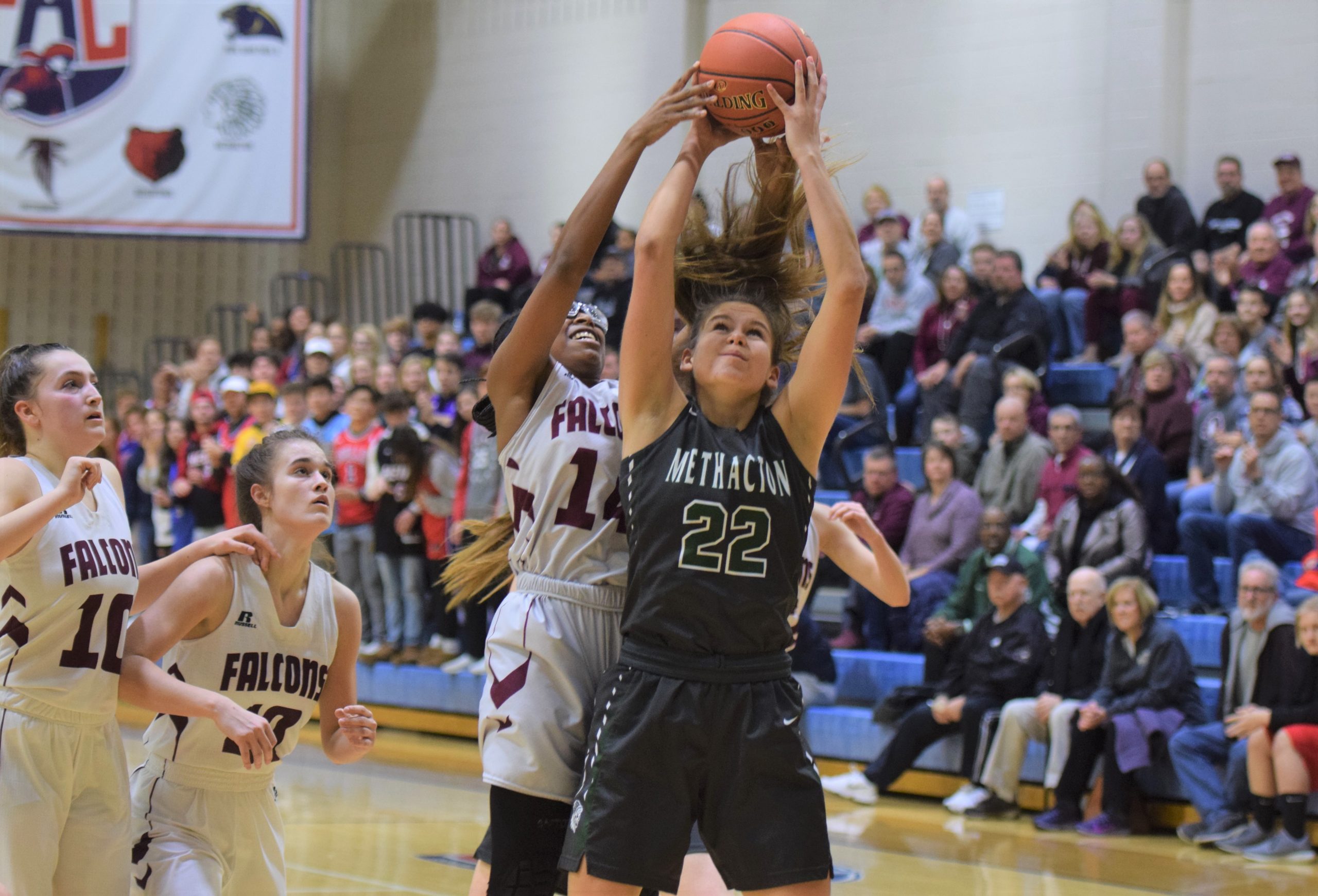 The Methacton girls basketball team led by 18 points late in the second quarter Saturday and in most circumstances it would have been smooth sailing.

But pesky Pottsgrove was not going quietly. At all.

Unfortunately for the Falcons and their comeback intentions, that suited Caroline Pellicano and the Warriors just fine.

“You don’t want an easy game. You want to know that you have to fight, you have to battle,” said the Methacton senior forward. “Even if your shots aren’t falling, you have to get there to the rebound, you have to make your foul shots, you have to do everything. And you want that because it makes you a better team overall.”

Methacton can certainly feel better for having made it through its Pioneer Athletic Conference semifinal with Pottsgrove as the Warriors fended off the furious rally attempt of the Falcons in a 55-47 victory to earn a return trip to the league championship.

It will be a championship rematch from last year as No. 3 seed Methacton (22-2) will try to unseat two-time reigning champion Spring-Ford at 7 p.m. Wednesday at Spring-Ford. Spring-Ford defeated Owen J. Roberts in Saturday’s other semifinal.

Sophomore Nicole Timko scored an efficient 18 points and senior Pellicano had a double-double with 10 points (5-for-6 shooting) and 13 rebounds for the Warriors. Senior Sydney Tornetta scored 10, all in the first half, while playing through illness.

Junior Sydney Mowery matched Timko with 18 points to go with eight rebounds and senior Summer Walker added 13 for Pottsgrove, which was the No. 2 seed and PAC Frontier Division champion.

It was a rematch of a 2018-19 semifinal that finished with a near identical result (Methacton 54, Pottsgrove 46).

Tipping point >> Pottsgrove trailed by as much as 18 late in the second quarter but had Methacton’s lead down to just 44-41 after a Rachel Ludwig 3-pointer with 4:05 to play. Pellicano’s offensive rebound and putback got the lead back to five before Pottsgrove’s Walker created an and-one opportunity that had the chance to cut the lead to two.

The free throw missed and on the ensuing possession, Timko drove the baseline and scored on a reverse layup with 2:02 to play for a 48-43 lead and a five-point margin that would never narrow again.

“You could see they were coming back, so it was about needing to keep our composure. We still had the lead, so all you have to do is build off it,” Pellicano said.

Despite not being able to complete the comeback, the Falcons gave its raucous supporters a lot to cheer for.

“We always have heart in our game. We’ll never give up, even when we’re down,” Mowery said.. “It’s just consistency that we might need. When we were within three, some shots that we needed just didn’t go in, whether it was tiredness or nerves. We needed to take advantage of those opportunities.”

Sparkling start >> It was 8-8 late in the first quarter but Methacton, ignited by a Cassidy Kropp 3, went on a 9-0 run for a 17-8 lead and then followed that with a 13-2 run capped by a Tornetta driving layup and 30-12 advantage in the minute before halftime.

Tornetta’s assertiveness in the first half ensured Methacton did not get off to the slow start it endured in the PAC playoff first round against Boyertown when it trailed 13-3 after eight minutes.

“She played at another level in the first half,” Methacton coach Craig Kaminski said. “And she’s playing under the weather, not feeling well at all and to give that effort was great. We fed off her in the first half.”

Fitting the occasion >> The game’s intensity fit the playoff occasion and had the makings of a good, physical battle in the paint and on the perimeter.

Methacton and Pottsgrove had the best scoring defense in their respective divisions in the regular season, Methacton allowing 30.9 points per game, Pottsgrove 35.3.

“It was definitely a change from the other night versus Boyertown because they (Pottsgrove) are a lot taller than them. It was just a physical battle. I knew I had to get myself good positioning and get up as high as I could and finish,” Pellicano said.

“Methacton is strong and has some big girls so we really had to box out and be physical because they’re a very physical team,” Mowery said.

We want a pitcher >> The 6-0 Pellicano is a multi-year starter and frontcourt fixture for the Warriors, even if basketball is her side gig.

Unlike softball where she is a Division I pitcher signed to Villanova, in basketball she’s a rebounding and defending cog in the wheel and wouldn’t have it any other way.

“I love it. It’s such a nice break from (the pressures of high-level softball),” Pellicano said. “I can get all my energy out and it’s something I can throw my whole self into other than softball. I think it adds to me as a player and athlete in general.”

“Her strength is on the defensive end and is always there in the middle for us, cutting down anything going on in the paint, she’s very vocal,” Kaminski said. “With 13 rebounds for us tonight, she’s very physical. Her offense is starting to come along which is nice. She does so many things for us that go unnoticed. She’s a big piece of the puzzle for this team.”

Anniversary party >> It was exactly a year ago, against the same opponent, that Mowery found something in herself.

Mowery scored a then-career-high 19 points in the Falcons’ 54-46 semifinal loss and has since emerged as Pottsgrove’s leading scorer.

“Last year I rarely got over 10 points,” she said, “but this game against Methacton last year, I got 19 points, which was my career high. And my coach (Mike Brendlinger) said, ‘Sydney, you’re capable of doing this every game.’ I took that into the summer.”

She had an 18-point, 10-rebound double-double against Perkiomen Valley on Dec. 19 that served as a jump-off point for her junior season.

“(Coach) gave me the challenge of trying to get a double-double every game. After that I got a few double-doubles, but I’ve started shooting more, started posting up and doing moves in the post. I started becoming confident in my shot and realized that I am capable of shooting the ball more.”

Big picture >> Methacton improved to 22-2 and earned a spot in the PAC championship game for the seventh time. The previous six times have all resulted in a runner-up finish for the Warriors.

Methacton is No. 4 in the District 1 Class 6A rankings. It is in line for a first-round bye and will begin district play on Wednesday, Feb. 19.

Pottsgrove (17-6) continues its season in the District 1 Class 5A tournament. The Falcons are ranked No. 8 in the current rankings. District play will begin Tuesday, Feb. 18.