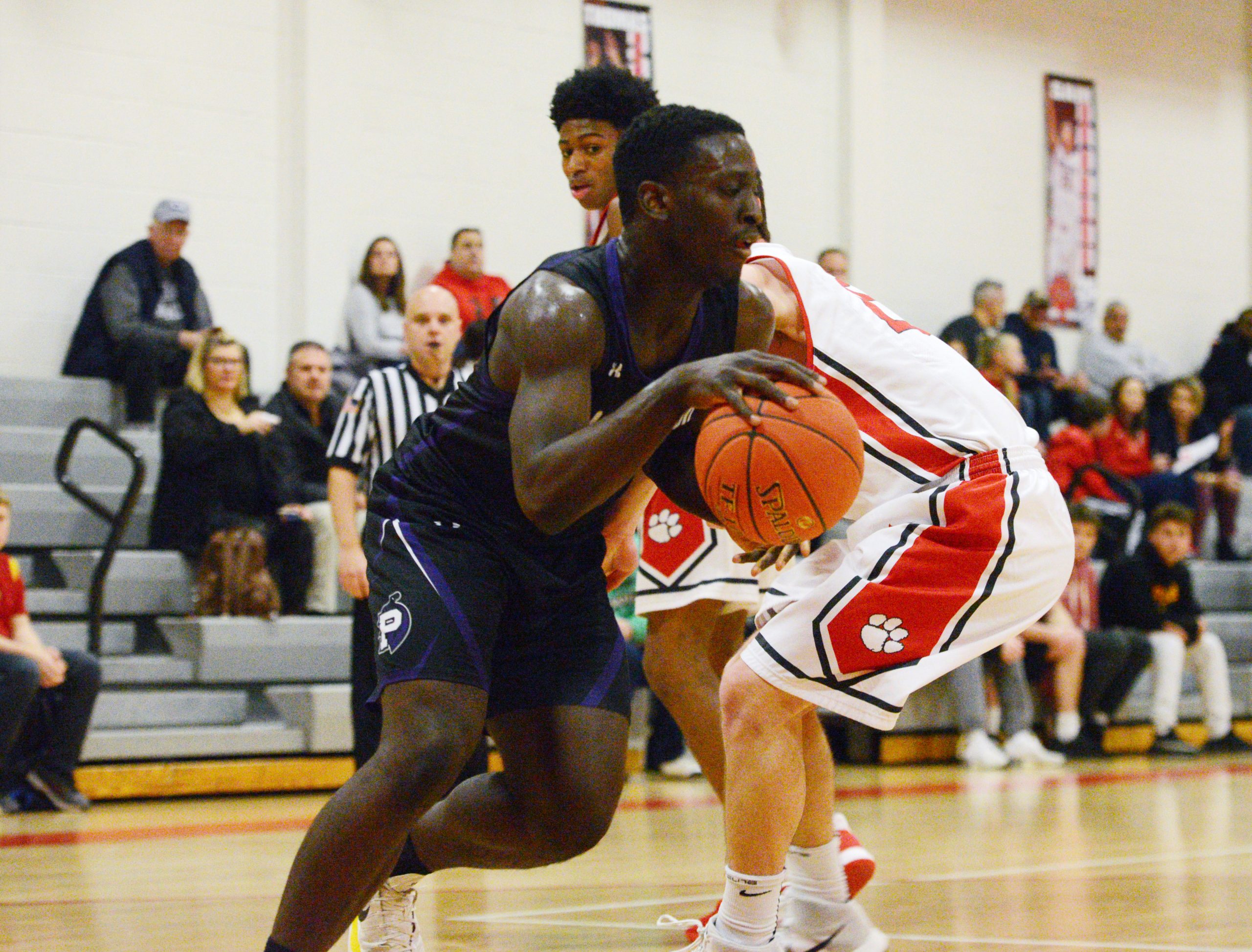 BUCKTOWN >> Chris Weiah knew he was going play a big role for the Phoenixville boys basketball team this season.

How often did the Phantoms’ staff and players remind the talented sophomore forward that his growth would be a key ingredient in their 2019-20 success?

“All the time,” Weiah said. “(They told me to) keep working hard and do your best everyday.”

Weiah, who saw both varsity and JV action one season ago, is starting to play some of his best basketball of the season as Phoenixville preps for the postseason.

The latest glimpse of the rapidly improving sophomore was a season-best 15-point performance in the Phantoms’ 68-59 Pioneer Athletic Crossover win against Owen J. Roberts on Tuesday to spoil the Wildcats’ senior night.

With talented guards like senior Steven Hamilton, who finished with 23 points, and junior Mike Memmo, who added 15, out on the perimeter, Weiah’s play down low could help determine just how far this Phantoms team (8-6 PAC, 12-8 overall) can go.

“We were telling him he’s young and he has all the potential in the world,” Hamilton said. “With Dylan Clark gone, we needed another big to step up to replace those buckets that Dylan had. And just a big to work hard, rebound before us, get buckets and just be that floor general for us in the post and be a dog.”

Weiah, a stocky 6-3 forward, said he wasn’t intimated playing down low against opponents three years older than him last season. He plays a tenacious style and made sure he wasn’t bullied around on the block.

“No definitely not, I was not going to let that happen,” Weiah said.

While the physicality of the varsity level didn’t seem to phase the young big, Phoenixville head coach Eric Burnett said it took time for Weiah to become acclimated to the varsity level. Weiah’s role grew and grew as the season progressed last year and he became a fixture in the Phantoms’ rotation late in the season.

Weiah has saved his best play for the latter part of the season once again. He came into Tuesday averaging 6.8 points per game, but he is starting to approach double figures on a nightly basis. He’s finished below eight points just once in Phoenixville’s last six games, including three double-digit scoring totals.

“Chris Weiah, we’ve known since seventh, eighth grade that he was going to be a special player,” Burnett said. “He still has a long ways to go, but he’s one of those guys that the more he has a basketball in his hands, the better. He gets better quickly.

“He understands the game. He understands how to play defense. He’s good around the basket, and he’s got a motor that I’ve never seen before.”

Hamilton said he’s seen the progression in Weiah, noting how much more comfortable he is when he catches the ball in the post. During a possession of Tuesday’s game Hamilton shouted, “Feed him,” as Weiah worked for position on the block, showing how much confidence he has in the sophomore.

Weiah scored seven first-quarter points Tuesday as Phoenixville led by as many as 14 points early on. After the Phantoms’ 38-27 halftime lead was cut to eight, Weiah scored two quick buckets to spark a run that put Phoenixville ahead 44-30 in the third quarter.

“He’s matured more,” Hamilton said. “There’s less turnovers. He’s being less careless with the ball. As a freshman, it was like he’s new to the system, he’s just trying to get his feel, but now he’s getting his confidence and he’s ready.”

Phoenixville’s seniors like Hamilton, Clay Kopko and Will Allain, who scored 10 points in Tuesday’s win, hope youngsters like Memmo and Weiah can help the Phantoms make a deep postseason run.

Phoenixville is currently ranked No. 10 in the District 1-5A playoff field, securely in the 16-team field with two games left. The Phantoms hope to get past the first round of districts for the first time since 2016.

After missing out last season, Phoenixville has already locked down a PAC playoff appearance. The Phantoms could be playing for a Frontier division title against Pope John Paul II on Saturday if they get a little help and take care of business Thursday against Pottsgrove.

What’s it like to be a sophomore in the center of it all?

Junior Jalen Lucas led OJR with 15 points, and junior Sam Cerimele added 10 points. Hurlock and Kuhl, chipped in nine points apiece for OJR, which was coming off a victory against Pottsgrove last Thursday.

Kuhl, who missed all but the last two games with an injury, has been a bright spot for the Wildcats as his career comes to a close.

“(Kuhl’s) been out the whole season, and he was pretty much out all last season,” OJR coach Bill Detweiler said. “His addition — the other night against Pottsgrove he had 14 — he kind of makes everyone better, and he’s such a smart player.”

After falling behind by as many as 14 points in the first quarter Tuesday, OJR used an 11-2 run at the start of the second quarter to pull within two, 22-20, with 4:33 left in the first half. Phoenixville responded with a spur of its own to close the half up 38-27 and led by at least eight points for the rest of the game.

Hamilton played a big role in the Wildcats’ comeback attempt never coming to fruition. He scored 10 points in the second quarter, including an emphatic fastbreak slam, to thwart an OJR run. Both times Lucas cut the Wildcats’ deficit to eight in the fourth quarter, Hamilton responded with a bucket on the other end.

“That kid Hamilton is unbelievable,” Detweiler said. “He’s so good. He’s another guy who makes everyone better. He just takes over. Really it’s hard to get somebody to guard him because he’s so quick and he gets to the rack.”