Tornetta reaches 1,000 points with some flair at Methacton 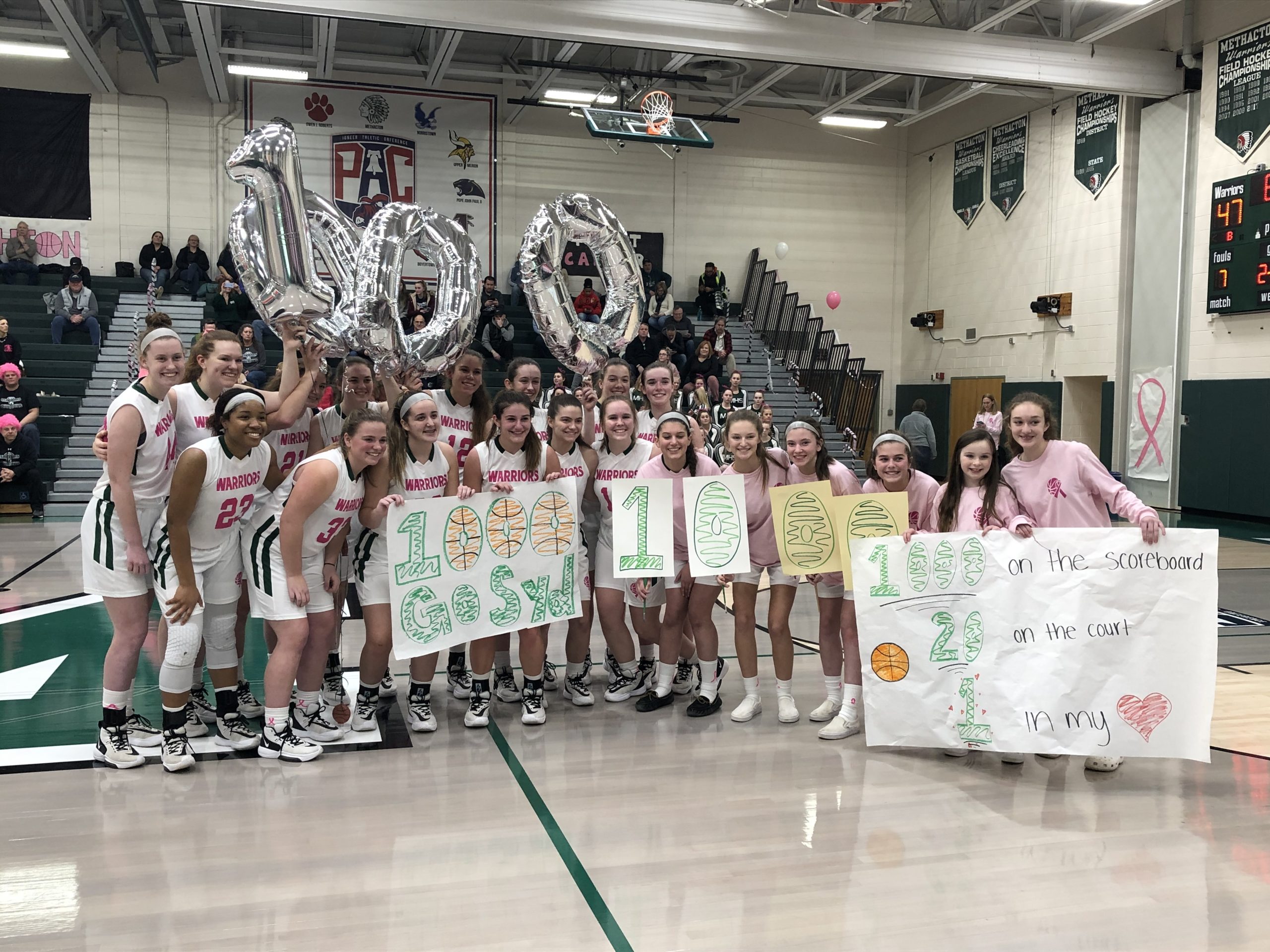 WORCESTER >> Sydney Tornetta looked at the clock and determined she had just enough time.

The Methacton senior really wanted to score her 1,000th point before halftime in Tuesday night’s game against Upper Merion, but she was a point short with less than five seconds on the clock. Adding a dramatic flair to the event, Tornetta ripped the ball away from a Vikings player for a steal in front of the scorer’s table and took off down the floor.

Tornetta tossed up a layup that bounced home at the horn as she bounced off the padding under the hoop, finally a 1,000-point scorer.

“I needed to get one basket to get 1,000 and I really wanted to go get it,” Tornetta said. “I kind of threw it, hoping it would go in and it did. As soon as I stole it, I looked how much time I had, that’s why I took it further out than a regular layup.”

Methacton coach Craig Kaminski had to stifle a bit of a laugh when asked about the theatrical nature of the guard’s milestone moment.

“That was great drama,” Kaminski said. “We wanted her to get it in the first half, while we had all the excitement. The environment was great but she was being a very unselfish player, it looked like she was going to get more assists than points in the first half.

“The way she did it though, that was awesome.”

Tornetta became the seventh player in Warriors’ girls basketball history to surpass 1,000 points and the first since Ryan DeOrio did it in 2017. Tornetta was a freshman when DeOrio reached the threshold and decided then it was something she wanted to go after as well.

From a pure statistical standpoint, Tornetta will go down as one of the best players in program history. The senior, who scored a game-high 22 points on Tuesday, now has 1,005 career tallies and is just 20 from tying Jenna Carroll for sixth all-time.

She has more than 660 career rebounds, already good for third all-time and a staggering number for a 5-foot-6 guard. Tornetta leads the team in assists this year, is the team’s leading scorer and rebounder and third in blocked shots.

The real kicker however, is that basketball is only her second sport.

“She’s a tremendous athlete,” Kaminski said. “She’s got really quick hands, she has speed, she can jump like crazy and I think you could put her in any sport and she would excel at it. When you put her on a basketball court, she can just flat-out play.” Tornetta is an exceptional lacrosse player, committing to Coastal Carolina in 2018 and making it official earlier by signing earlier this school year. A midfielder, Tornetta already surpassed 100 career goals and in the spring, will try to reach 200 goals and possibly 100 assists. While she had to give up playing AAU ball to focus on travel lacrosse – Tornetta plays club with NXT – she never stopped working on her secondary sport.

“I think I’ve put just as much time into this,” Tornetta said. “My teammates, coaches and parents are always pushing me to do as much as I can. Even though it’s not my main sport, it helps me a lot with lacrosse, it’s a lot of the same dynamics on defense and offense.”

Tuesday, the senior got off to a bit of a slow start and had just four points in the first quarter. She was driven to score the 17 points she needed to reach 1,000 before halftime, but had to keep telling herself to stay calm and let it come to her.

Tornetta credited her teammates for looking her way and a couple of runout layups got the guard to 10 points with about three minutes left in the second quarter. Then, she kind of went off.

In the last two minutes of the half, Cassidy Kropp found the guard for a layup, she got fouled on a drive, split the free throws, rebounded her own miss, then got an and-one with the free throw putting her a point away with less than 15 seconds left.

“I think I was getting mad at myself because my teammates were being great and trying to get me the ball,” Tornetta said. “I kept missing shot after shot so I think I had that drive in me like ‘I need to do this, I want to go get it now.’ I didn’t want to wait until after the half because I didn’t know if I would get it.” Methacton Sydney Tornetta takes a picture with her parents to celebrate scoring her 1,000th career point during the Warriors’ game against Upper Merion on Tuesday, Jan. 28, 2020. (Andrew Robinson/MediaNews Group)

Tornetta, who accomplished her goal of scoring the milestone point at home on the team’s still new floor, said it was a relief to get out of the way with some tough games coming up and the PAC playoffs looming. The Warriors are having a great season as a team, in the running for a first round District 1-6A bye and hoping to make the PAC final for a second straight season.

The senior said she did consider playing basketball in college and heard from a couple of schools but ultimately followed the same path her mom Dawn did by choosing lacrosse over hoops.

“I love basketball just as much as I love lacrosse, it was really hard picking between the two but I felt I had more of an opportunity playing lacrosse,” Tornetta said. “I definitely will miss it when I’m in college.”

Kaminski said he’s most proud of how all-around a player Tornetta has become, including a first team All-PAC pick as a junior. Early on, she was a scorer by trade and need, but she learned to hone her jumping ability to become a tenacious rebounder, her defensive impact jumped leaps and bounds and she’s become a refined passer.

Tornetta had a similar sentiment, taking a lot of pride in tracking her stats during the season and seeing all the ways she could impact games beyond putting the ball through the rim.

“She is an explosive player and when she puts her mind to it, a dangerous player,” Kaminski said. “I’m going to miss watching her play. She’s not someone we’re going to replace.”

“Craig always says how he has faith in me and he trusts me with the ball,” Tornetta said. “That trust really helps me.”

As she made her way off the baseline, first getting mobbed by her entire team under the basket she’d just scored her 1,000th point on, Tornetta stopped to wipe a couple tears of joy from her eyes.

“It all hit me at once,” Tornetta said. “I was just so happy to be able to get it and be able to experience that moment with my teammates.”