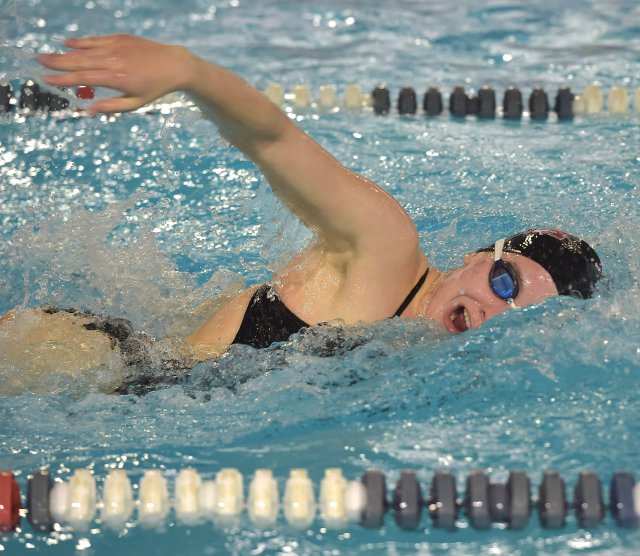 Tredyffrin >> Conestoga’s swimmers, who just finished up a few days of mid-term exams, recorded a grade of “A” Friday afternoon in keeping their undefeated records intact in a boys-girls sweep of Garnet Valley.
The Pioneer girls (10-0 overall, 9-0 Central League) hosted an undefeated Jaguars’ squad, and handed the Garnet Valley girls (6-1) their first loss of the season, 103-81, Friday at the Upper Main Line YMCA.

To view a photo gallery of the Conestoga-Garnet Valley swim meet click here
“We swam well today, the girls did a great job – we’re missing a couple of people, and it’s a tough time of year for the team,” said Conestoga girls head coach Rob Kirkby. “They just had mid-terms, there’s a lot of sickness going around, and some of them have a lot of big meets coming up with their club teams. They’re training hard through that, and the girls are a little tired, but they’re doing fine.”
The Conestoga boys’ squad (9-0-1 overall, 9-0 Central League) made it a ’Stoga sweep, defeating Garnet Valley 101-77.
“They all did well considering that they had mid-terms Wednesday, Thursday and Friday – that kind of throws them off their schedule,” said Conestoga boys’ head coach Mark Tirone. “Their sleep is changed, their eating habits change. Today most of them had one mid-term today, and they were done at 9:30, 10 a.m., and they went home. It kind of throws them out of their routine. They had three days of hard studying, long days, short nights.”
Conestoga senior Louise Hay, who will be swimming for Middlebury College next winter, said, “It’s getting late in the season, and we’re starting to get tired from all the meets, but we’re also getting hyped up because our championship meets are coming up. And Garnet Valley’s always a great team, it’s fun to compete against them.”
It was Senior Day for Conestoga, and Hay was one of a number of seniors who contributed solidly to the Pioneers’ sweep Friday, finishing second in the 100 free, placing third in the 50 free and leading off for Conestoga’s first-place 200 free relay quartet.
During a break in the meet, Conestoga recognized its senior swimmers – Hay, Caroline Famous, Erin Oh, Jamie Semmer, Tanna Styer, Sam Verrelli, Lucy Wydeven, Allison Yuan, Jack and James Hughes (twins), Ishau Jiang, Aaron Li and Miles Whitaker. This group of seniors has enjoyed remarkable success the past four years in the Central League.
Caroline Famous led off the meet as the opening swimmer for Conestoga’s first-place girls 200 medley relay quartet, which included sophomore Adriana Bertolotti, senior Allison Yuan and freshman Lily Robinson. Later in the meet, Famous finished first by a comfortable margin in the 100 back (59.05).
“Caroline was coming off an injury [shoulders, back] in which she overdid it a little during the winter break, and she did a great leadoff leg in the medley relay today,” noted Kirkby.
Robinson went on to win two individual events, the 50 free (25.03) and the 100 free (55.13).
“Lily did a great job today in the sprint events,” said Kirkby.
Robinson also anchored the first-place 200 free relay squad that included Hay, sophomore Kallie Whitaker and Yuan (1:42.39).
Another Conestoga freshman, Naomi Furman, won the 100 breast with a clocking of 1:09.75.
For the Garnet Valley girls, junior Catherine Weaverling, a state finalist in both the 100 fly and 100 back last winter, won both the 200 IM (2:10.10) and the 100 fly (57.03) Friday.
Other Jaguar individual girls winners included freshman Diedre-McKenna Scudder (200 free, 2:01.75), senior Amy Townsend (500 free, 5:24.99) and junior Lindsey Chapman (diving, 179.65 – the diving event was held several days earlier).
“It was a good meet for us, the girls swam well – they were fired up today to have some good races,” said Garnet Valley head coach Clark Bickling. “Catherine Weaverling and Diedre-McKenna Scudder both looked good, and [sophomore] Stephanie May [fourth in the 100 fly] qualified for the Central League championships. Our relays looked good – some of the best times we’ve had this season.”
For the Conestoga boys, the individual winners were sophomore Jack Semmer (200 free, 1:52.92); sophomore Gary Wang (50 free, 22.96), freshman Noel Park (100 fly, 56.38), junior Prathit Ray (100 free, 50.13), sophomore Stephen Graver (500 free, 4:59.85), sophomore Ryan McDonough (100 back, 58.45) and junior Patrick Hoey (diving, 135.40 – the diving event was held several days ago).
The Pioneers also won the 200 medley relay with a sophomore quartet of Wang, Raymond Welgosh, Stanley Kim and Stephen Graver (1:42.80).
Conestoga also finished first in the 200 free relay, with a quartet of James Hughes, Whitaker, Graver and Jack Hughes (1:33.33)
For the Garnet Valley boys (3-5 overall and in Central League), senior Griffin Young, who has committed to swim at American University, won the 200 IM (2:10.30) and was second in the 100 fly (57.20). Senior Aidan Zipf, who qualified for States in the 100 breast the last couple of years, finished first in the 100 breast Friday (1:03.05).
An improving sophomore Jaguar, Matt Hurford, finished third in the 50 free (23.73), and was part of three solid Jaguar relay squads – 200 medley relay (placed third), 200 free relay (finished fourth) and the first-place 400 free relay team (Hurford, Young, junior Tyler Baldino and senior Josh Schumacher).
Bickling said, “Our boys did great today. We graduated a lot of talent from last year (when the Jaguars were third in the Central League), but other kids have really stepped up this year and are working hard every day – you can’t ask for more than that – their times are starting to drop.”

NOTES >> One of the Conestoga seniors, Lucy Wydeven, was celebrating her birthday Friday, and the team sung Happy Birthday to her before the meet. She finished third in the 100 back and led off the Pioneers’ 200 medley relay team that placed third.
“The Wydeven family has been swimming for Conestoga for 10 years – the longest-running family I’ve had,” said a smiling Kirkby.
In the Conestoga boys’ meet, Tirone moved some swimmers into events which they don’t normally swim.
“There are some kids for which I don’t have any times at all for in certain events, so I always want to get at least one time for them,” said Tirone. “You never know what you’re going to find – when that kid is reluctant to tell you that he swims the butterfly or breaststroke, and then you put him in, and you say, ‘Wow, there’s some potential there.’”
A big match coming up for the Conestoga boys is Jan. 31 against Springfield, which has only one Central League loss and that came, according to Tirone, “when they were missing a lot of swimmers.”